Linda and I heard of the annual Cycle The Sierra bicycle tour from friends, who found the ride to be strenuous but scenic. Our only previous bicycle rides in the Northern Sierra Nevada were loops around Lake Tahoe. Most of the 2016 route would be new to us. So we decided to give the Cycle the Sierra bicycle tour a try for June 2016. Our friends Mark, Mary, and Chuck also joined us on this tour, though they proved to be stronger riders and almost always rode well ahead of us. 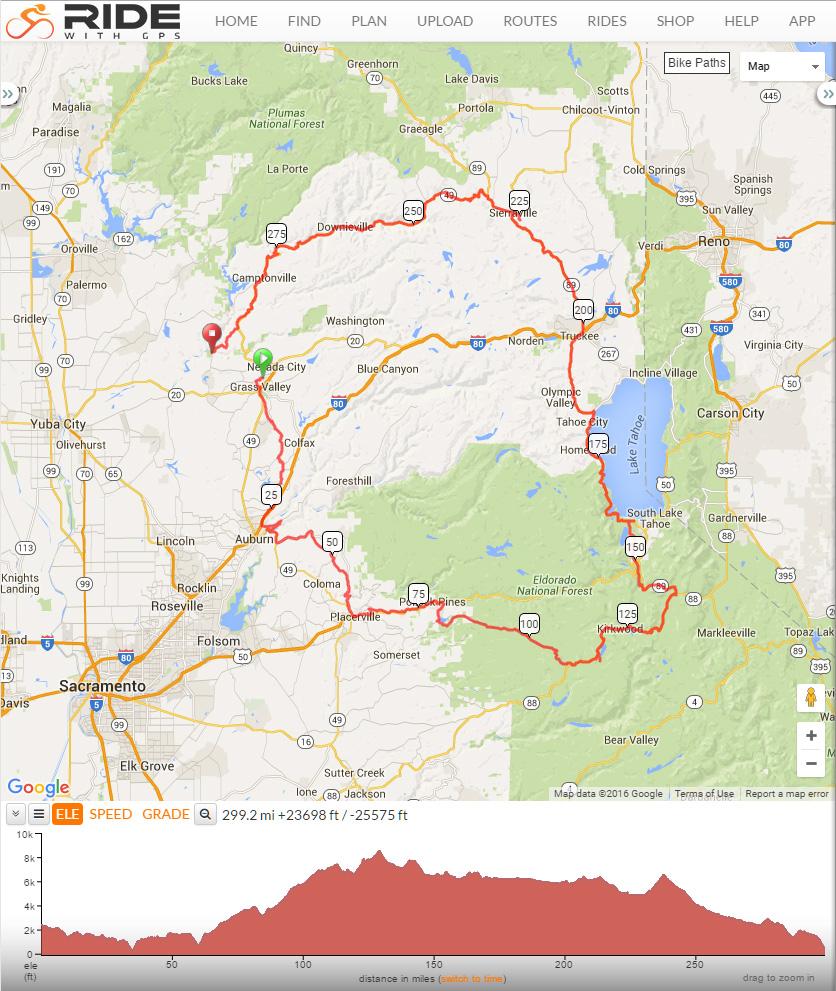 We left Nevada City and rode through Grass Valley, then on country roads through oak woodlands and low traffic for many miles. We crossed over the Bear River and entered the outskirts of Auburn before steeply descending to the confluence of the North and Middle forks of the American River. This was Saturday and there was a lot of traffic leading to and from the river. From here we had a steep 3 mile climb from the river on a sometimes narrow road with little shoulder. Linda and I rode as close to the shoulder as we could. We relied on the alertness of the drivers approaching and passing us as we climbed. Above the climb we reentered oak and pine woodlands. At one point as I climbed a quiet forested road I wondered if I had made a wrong turn as I could see no other riders. I stopped to compare the cue sheet with my GPS map and decided I must be on route just before Linda passed me. Linda approached an intersection where a dog bit her on her right leg as she rode by. We eventually descended to the South Fork of the American River to find our camp at the Nugget Campground near Chili Bar. Here we enjoyed the late afternoon and had the first of many excellent dinners. 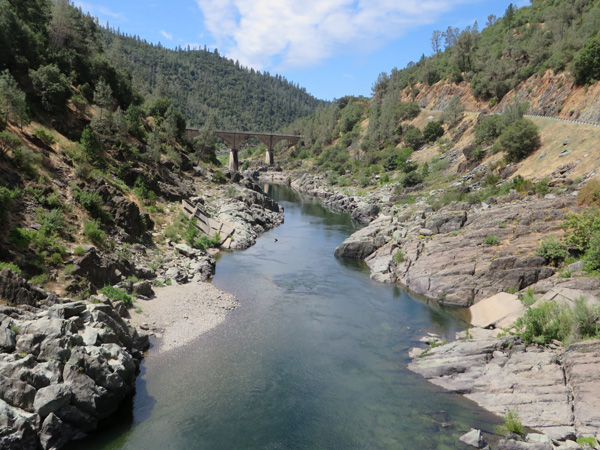 Linda and I declined the optional shuttle that would avoid the very steep morning climb and skip the first 25 miles of the ride. We thought that after our miles of cycling in Tucson over the winter we would be able to handle the day’s exertions, and I noted very few others taking the shuttle. I noted later that the shuttle was “recommended for riders who are not in top physical riding shape”. It turned out to be a very long day.

The day started with a steep climb to Placerville on a narrow road with busy morning traffic. We followed a bike trail through much of Placerville, then headed east to climb much of the western slope of the Sierra. The route passed along vineyards and orchards on low-traffic roads then dropped down to Jenkinson Lake for a rest stop. This is where the morning shuttle would have taken us. We had gotten hungry before reaching Jenkinson Lake and stopped at a gas station to enjoy a coke and snacks. At Jenkinson Lake we started an unrelenting climb, much 8-10%, up the Mormon Emigrant Trail. I still carried some snacks with me and that helped later as the second rest stop had few snacks. Lunch was available only at the third stop which I did not reach until 3:30 PM. This was just before we turned north onto California State Route 88. Most of the climbing was behind us and the grade on the highway was lower. The descent to Silver Lake and on to the nearby Stockton Family Camp was a fine way to finish the long day. My GPS reported that I had climbed 9000 feet. The 8-10% grade had made the day particularly strenuous for us. We enjoyed another pleasant afternoon and had an excellent camp dinner with some new friends. 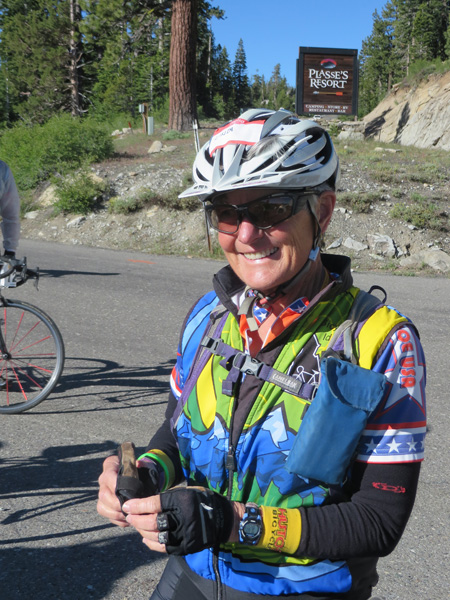 This was the shortest day of the tour and allowed us some recovery from the previous day’s climb. We climbed steeply out of Silver Lake onto California State Route 88 (the Alpine Scenic Highway). Our route headed north, then east below Carson Spur where we had scenic views of the western slopes of the Northern Sierra. The route descended past Kirkwood Valley and Caples Lake, then climbed to Carson Pass at elevation 8652 feet.

From Carson Pass we descended past Red Lake on excellent asphalt. I noticed at one point I was traveling 50 mph but needed to keep my eyes on the road ahead of me and at some point deal with a little wheel wobble apparently caused by a slight cross wind. At the bottom of the descent I discovered I had maxed out at 52.1 mph, a personal record for me. Linda reached over 53 mph.

We continued on through Hope Valley, then turned north onto California Highway 89 and climbed over Luther Pass. Descending quickly from the pass Linda and I made a quick turn onto a steep and rough forest road. This led down to the Upper Truckee River and onward to Camp Richardson near the shore of Lake Tahoe. Linda and I enjoyed the ride, campsite, and relaxing dinner. During the night several bears entered the group campsite to feed on food someone had left out. This alarmed several campers and caused camp security to come out and fire shotgun blanks to drive the bears away. 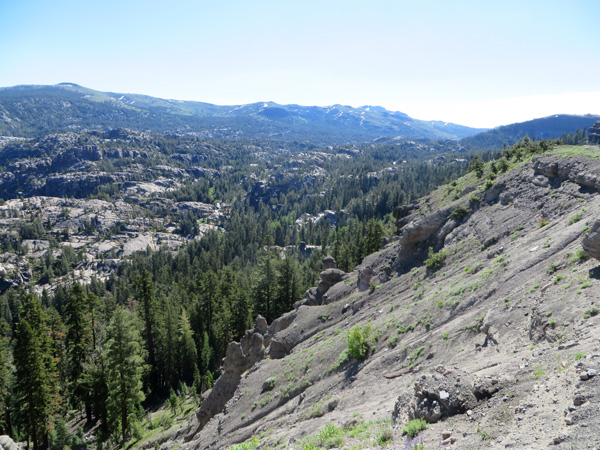 Looking towards Carson Pass from below Carson Spur

We left South Lake Tahoe and climbed above Emerald Bay and along the western shore of Lake Tahoe on California Highway 89 to Tahoe City. This was a pleasant ride on a good road with shoulders. Linda and I had twice before ridden this route on Tour De Tahoe event rides. Near Tahoe City we encountered some road work but Linda and I took advantage of a bike trail to avoid waiting for and following a pilot car. From Tahoe City we followed the Truckee River to Truckee for a nice lunch stop downtown.

Our route left Truckee following California Highway 89 to Sierraville. This was a mostly pleasant ride through pine forest. Linda and I were alarmed at one point when an impatient car driver decided to pass a long truck uphill towards us, passing close by as we were unable to move completely off our lane due to a guard rail. Later my front shifter cable broke. I was restricted to my smaller chain ring as I continued on to the next rest stop. I was very pleased to discover the tour bike mechanic was able to quickly replace the cable there. The new shifting cable also fixed my previous ongoing problem of losing my chain whenever I incautiously shifted to the larger chain ring. We camped that night at the Sierra Hot Springs Resort outside of Sierraville. The bike mechanic replaced my damaged front derailleur in camp that afternoon. Linda and I took a sulfurous shower and enjoyed another excellent camp dinner at the resort. 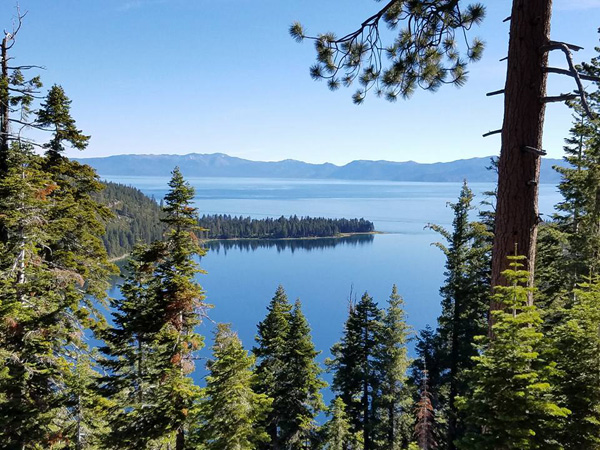 Our last day on the tour was nominally 87 miles. But Linda and I any many other riders took a shuttle back to Nevada City from the South Yuba River to avoid a long climb in the afternoon heat. The day started pleasantly, with a climb on California Highway 49 up to Yuba Pass and the prospect of many miles of descent beyond. Linda and I made a few stops on the way up to the pass and did not realize until we reached the pass that we were the last riders of the tour and Kelly, the SAG driver, was lingering to keep an eye on us.

This motivated us to try to catch others as the route descended west on California Highway 49 along the North Yuba River. We caught up with a few others at the rest stop in Downieville. Kelly was still lingering for the slow riders but needed to move ahead to support faster riders. Linda and I agreed later, midway up a steep climb, to take up Kelly’s request to shuttle us to the top of the climb so he could move ahead.

We had another climb before reaching North San Juan and our lunch. From here the route left the highway onto narrow country roads and eventually descended steeply to the South Yuba River at Bridgeport. The afternoon was getting hot at the lower elevations and Linda and I, along with many others, were glad to take the shuttle option back to Nevada City. The shuttle passed several strong riders on the climb back, including our friends Mark and Chuck. 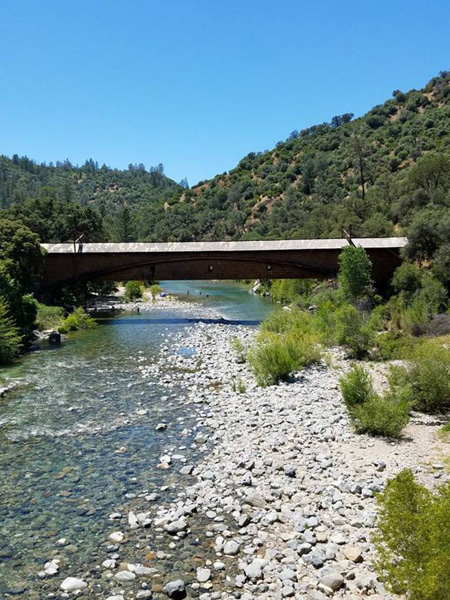 Linda and I were glad to have joined the Cycle the Sierra bicycle tour. It was a small group of 38 riders so it was easy to meet other riders and enjoy restful campsites and good meals. The crew members were friendly and the ride mechanic excellent. We were fortunate to have excellent weather the entire tour. Linda and I have no plans to repeat the tour. But we can recommend the Cycle the Sierra bicycle tour for experienced and strong riders who have confidence on sometimes narrow and steep roads with heavy traffic and who can enjoy strenuous climbing and a faster riding pace.

I had the good fortune to have spent most of my life in the Pacific Northwest, where I discovered the joys and addiction of hiking and climbing in the Cascade Range and other mountain ranges in the Western United States.
View all posts by Paul McClellan →
This entry was posted in Bicycling and tagged bicycle tour, California, Cycle the Sierra, Sierra Nevada. Bookmark the permalink.