Linda and I spent several weeks in March of 2014 visiting Arizona for bicycling and hiking. This was our third Spring visiting Arizona and we were curious to see locations we had not previously visited. I enjoyed hiking several Arizona “prominence peaks”: Mount Ord, Pinal Peak, Mount Graham, and Chiricahua Peak. The only significant snow I encountered was on Mount Graham, and it was manageable. The weather was ideal for hiking and enjoying the scenery.

Our first camps in Arizona were near Sedona and at nearby Cottonwood State Park, where we first got on our bikes to explore around Cottonwood. After a few days we relocated March 13 to Payson which was our base for four days.

The next day we drove to a locked gate and hiked up Mount Ord just off Highway 87, a 2000 foot prominence peak in the Mazatzal Mountains. The weather on the summit was light and intermittent hail turning to drizzle with thunder in distance, but it was a pleasant hike with good views of the mountains and valleys south of Payson. We then visited Fountain Hills, near Mesa. 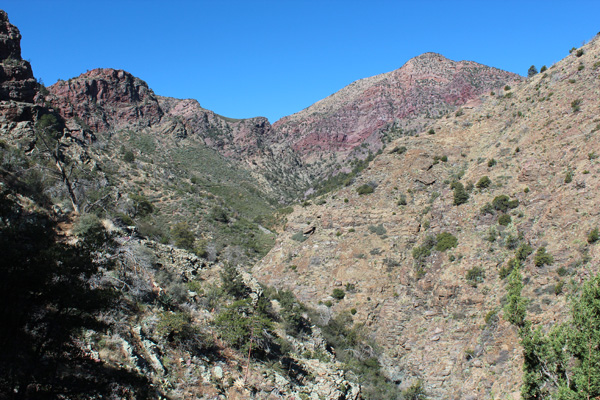 The trail then switchbacks up left and follows a creative route up a side canyon leading past cliffs and a scenic waterfall and pool before reaching the higher slopes of Mazatzal Peak. Big Kahuna Falls are formed by a seasonal creek on the north slope of Mazatzal Peak above Barnhart Canyon. It is a popular hiking destination. 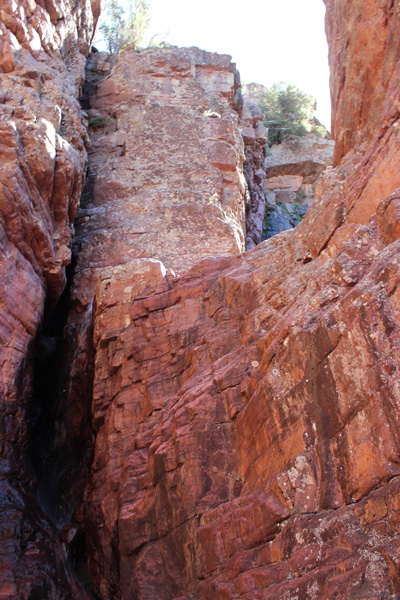 The trail climbs onto the NW Ridge of Mazatzal Peak and meets a trail junction at about 6000 feet. A recent wildfire apparently destroyed a forest here, and the slopes are now very brushy. The crux of any summit attempt from here would be to minimize the brush thrashing while traversing upwards towards the summit, but I was not prepared for this. Next time I will be. 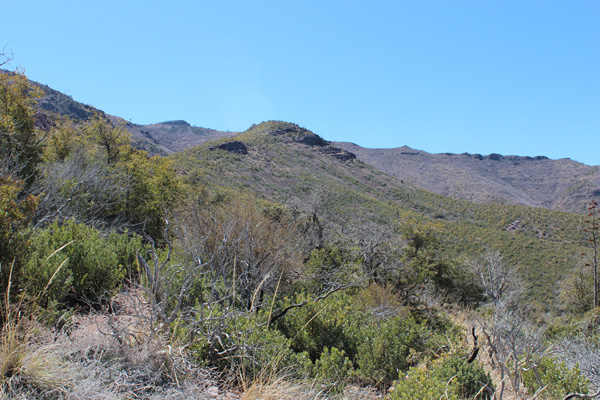 The NW Ridge of Mazatzal Peak from Barnhart Trail

On our last day in Payson we bicycled through the town to get to know it better in case we wanted to return to Payson on another Arizona trip.

The following day, March 17, we broke camp and headed south to set up camp at Usery Mountain Regional Park. Linda had been fortunate to reserve a site for us a few days earlier – someone had fortunately cancelled their reservation. We explored nearby Mesa that afternoon.

We mountain biked in the park the next day, and experienced some flats, most likely from cholla fragments lying on the trail. I can appreciate why many mountain bikers use tubeless tires with sealant inside the tires to deal with this desert biking issue. Our friend Mary from Bend arrived that afternoon and we relaxed in camp enjoying the roomy site, its many native plants and birds, and a pleasant sunset.

On March 19 we drove over the Apache Trail (AZ 88) to Roosevelt Lake, then through Globe to access a road up Pinal Peak, the highpoint of the Pinal Mountains with over 4000 feet of prominence. We parked the car a few miles short of the summit and walked the road past several summer homes to the summit and back. The following photo shows the view east from Pinal Peak with Mount Turnbull on the left and Mount Graham far in the distance on the right. 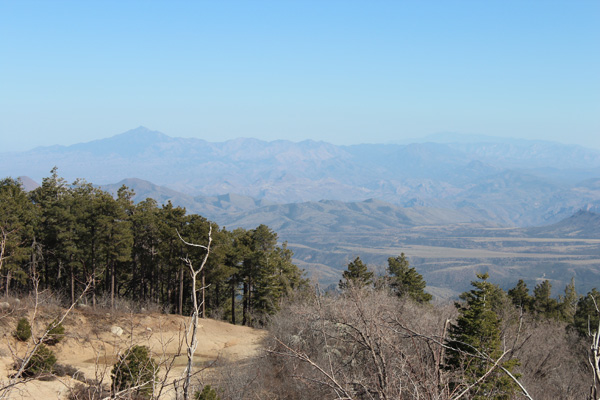 We returned to camp and spent the last day there bicycling from Usery Park to Mesa and through Apache Junction towards the Superstition Mountains and back. The riding was easy and the views of the Superstitions were interesting – a destination for hiking someday.

The following day, March 21, we broke camp at Usery and relocated to Roper Lake State Park near Safford. That afternoon I drove up the Swift Trail Parkway to a locked gate and parking area shortly beyond Shannon Campground at 9158 feet elevation where I planned to start my hike up Mount Graham the next morning. The road up was paved and steep with sharp turns. I wondered if Linda might like to descend the route tomorrow on her bike while I hiked. She would have to descend carefully if so. 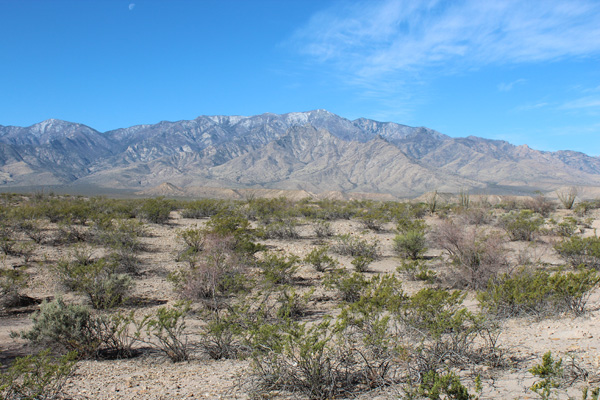 On March 22 I returned to hike Mount Graham, the highest point in the Pinaleno Mountains. Mount Graham is the most prominent Arizona peak with 6320 feet of prominence. Linda rode up with me and enjoyed a sometimes challenging 6000-foot bike descent back to Roper Lake State Park. From the parking lot I followed Forest Road 507 most of the way to the summit of Mount Graham. This road was mostly clear of snow, but did have a few covered sections that I skirted around or broke through. 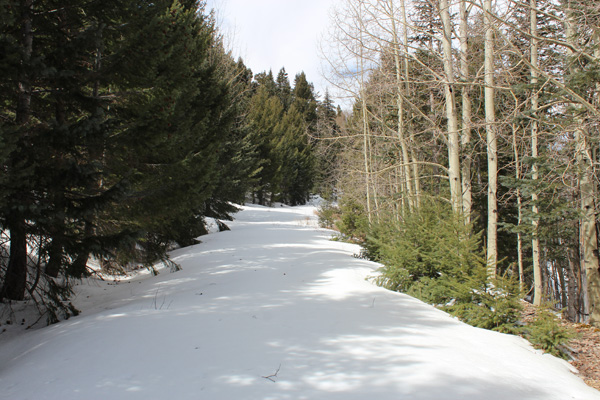 Snow-covered road on the way to Mount Graham summit

I left the road just short of the summit and hiked up through downed burned timber to eventually find the summit registry and benchmark at 10720 feet. The registry was in a burned out stump under downed timber. Near the summit I noticed an observatory building on an adjacent rise to the west. The best views through the burned timber were to the east, looking 7600 feet down towards Roper Lake State Park, and south past Heliograph Peak towards Dos Cabezas Peaks and Chiricahua Mountains. In the photo below Heliograph Peak is in the center and to the left of it are Dos Cabezas Peaks in the mid distance and Chiricahua Peak on the horizon. 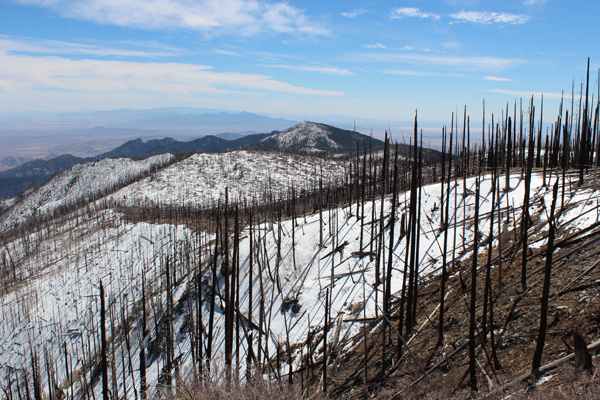 On March 23 I drove south from Roper Lake State Park through Willcox and south to trailhead parking at the Rustler Park Campground to hike Chiricahua Peak, the highest point in the Chiricahua Mountains.

The Rustler Park Campground was closed due to the Horseshoe 2 Fire of 2010, but work was underway to remove the burnt trees. From there I hiked the Crest trail to where it forks just below Chiricahua Peak, then followed Chiricahua Trail to the forested summit. 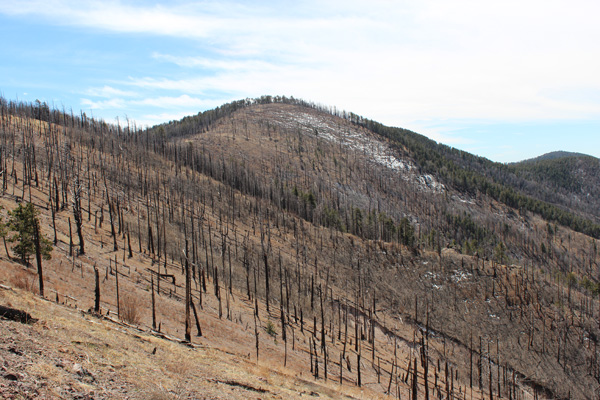 It was a mostly clear day with great views to the north. I encountered a little ice on the trail below the cliffs near the start, and a few snow patches otherwise, but the trail was virtually snow-free. Unfortunately much of the forest along the trail has been burned. Here is the view north from the Chiricahua Crest Trail, with Dos Cabezas Peaks in the mid distance and Mount Graham on the horizon. Chiricahua Peak is the fourth most prominent Arizona peak with 5139 feet of prominence. 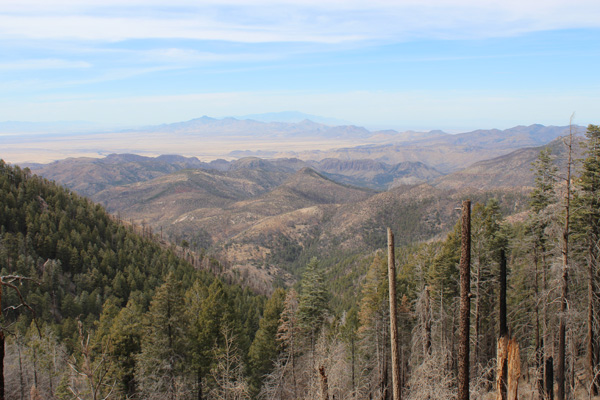 The next morning, March 24, we broke camp and headed north towards home. We camped at Page AZ, Wells NV, and Eagle ID on the way.

I had the good fortune to have spent most of my life in the Pacific Northwest, where I discovered the joys and addiction of hiking and climbing in the Cascade Mountains and other mountain ranges in the Western United States.
View all posts by Paul McClellan →
This entry was posted in Bicycling, Hiking and tagged Arizona, Chiricahua Mountains, Chiricahua Peak, Mazatzal Mountains, Mount Graham, Pinal Mountains, Pinal Peak, Pinaleno Mountains. Bookmark the permalink.