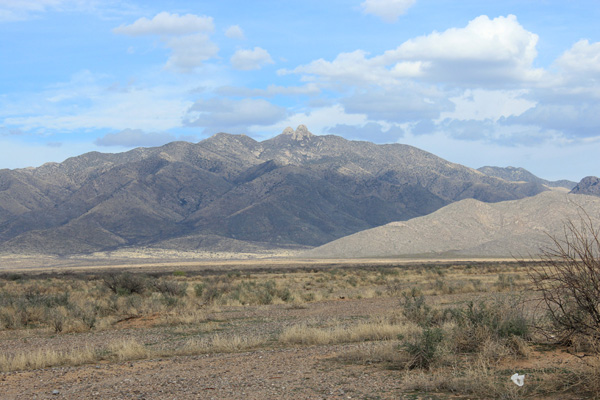 Dos Cabezas Peaks are quite visible from Arizona Highway 186 southeast of Willcox. The South Peak is the rightmost of the two rock towers in this view and is the higher of the two. 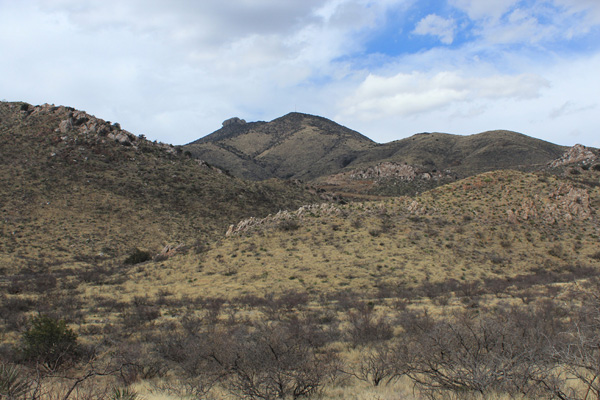 The South Peak from low on the Mascot Mine Road.

Dos Cabezas Peaks lie on BLM-administered land, but the access is blocked in many directions by private land guarded by locked gates. We hoped to hike the Mascot Mine Road towards the peaks starting from a locked gate near the town of Dos Cabezas.

Eric repeatedly called the owner of the property crossed by the Mascot Mine Road and left messages requesting access. Eric eventually obtained permission to cross the private land, which meant we could do so without fear of prosecution. 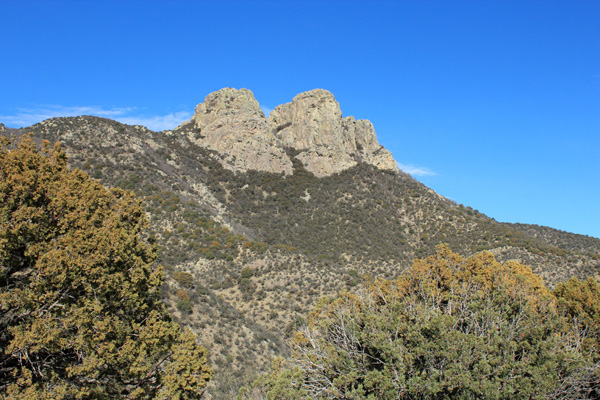 We started our climb by climbing over the locked gate across the Mascot Mine Road and hiking towards the peaks. This road was in excellent condition. As we approached a saddle on the road the Dos Cabezas South and North Peaks appeared in profile, with the South Peak on the left.

After passing the saddle we followed the road to its end. From there we climbed steeply up slope to reach the upper saddle at about 7880 feet decorated with a high antenna. We then followed the sometimes brushy ridge north towards the South Peak. 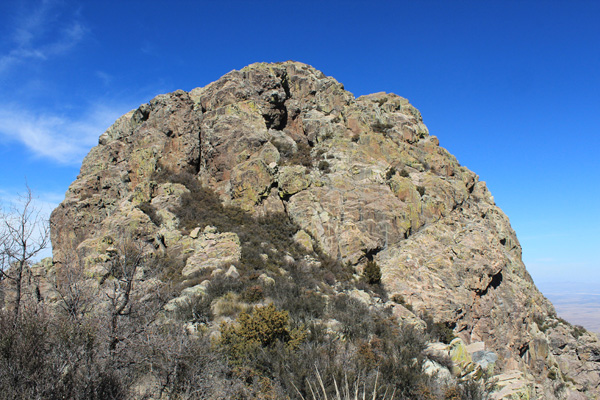 The Dos Cabezas South Peak faced us from the ridge traverse. A vertical crack splits the left-most third of the face with brush at its base. Further down to the right against the face is a large, lichen-covered rock. Behind this rock lies a ramp leading to a brushy ledge to the right and leading diagonally across the face to a last visible bush on the right. Here a hidden gully leads diagonally up to the left to the summit. We first tried the obvious ledge on the lower right of the peak but it ended in very exposed and difficult rock. 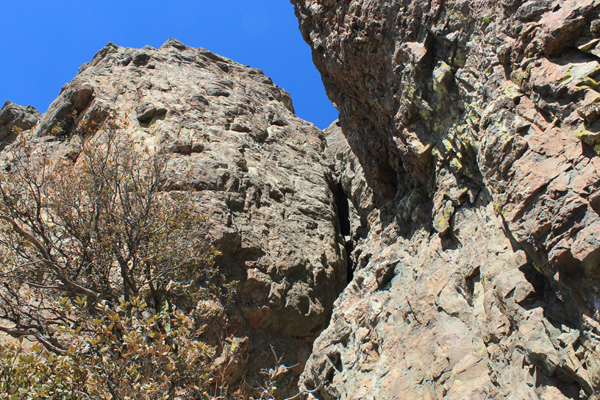 The vertical crack to the left of the ramp 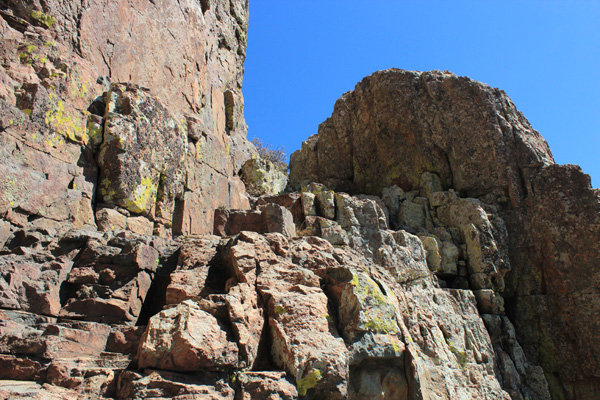 The ramp leading higher to the brushy ledge 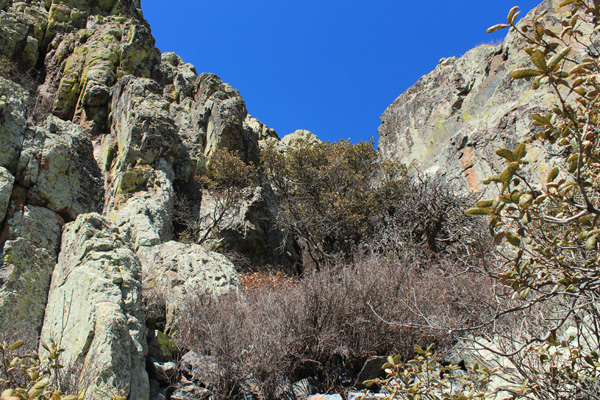 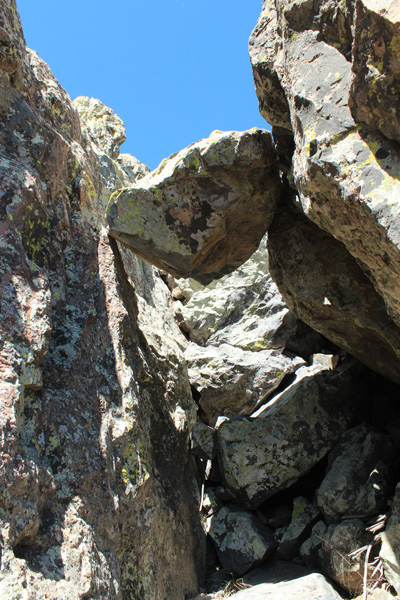 As expected, the ramp led to a brushy ledge system which we followed towards a blind corner. Around the corner to our left we found a gully leading up through brush towards the summit. On the way up the gully led to a chockstone which we climbed under and over. I noted the few points of contact supporting the rock as I passed under it. 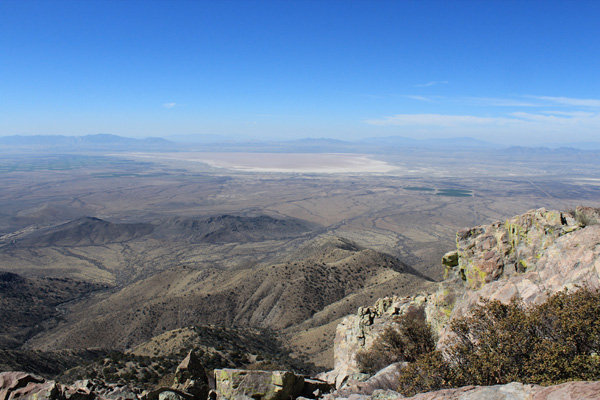 Beyond the chockstone we scrambled up open rock slopes to the broad summit. We relaxed on top, had our lunch, and enjoyed the views of many mountain ranges around us. It had been windy for several days earlier and the sky was still dusty. Yet looking west from left to right in the far distance the Dragoon, Little Dragoon and Rincon Mountains were visible. Willcox Playa, a popular birding area, appeared below. 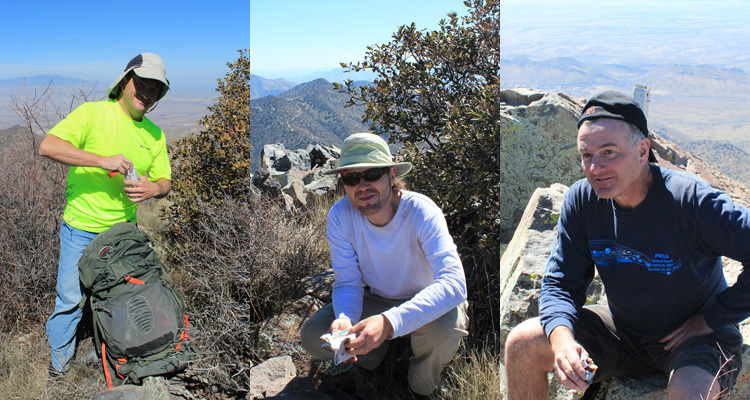 Eric Kassan, Matthias Stender, and Michael Berry on the summit

Michael found the registry, but it was damaged and the papers were mashed together inside. Eric replaced the damaged registry container with a new one and added a fresh notepad to the mass of loose papers. Eric comes prepared. 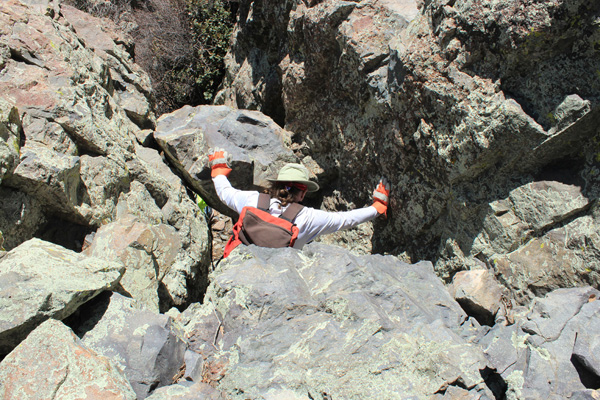 Matthias descending around the chockstone 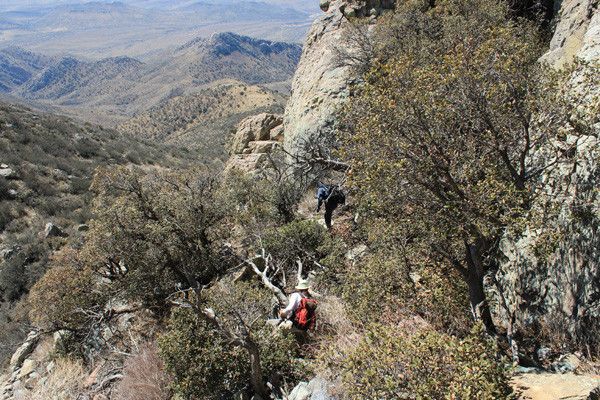 Michael and Matthias descending the ledge 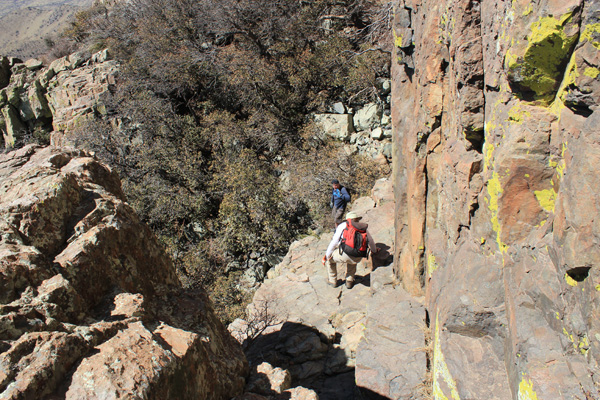 Michael and Matthias descending the ramp 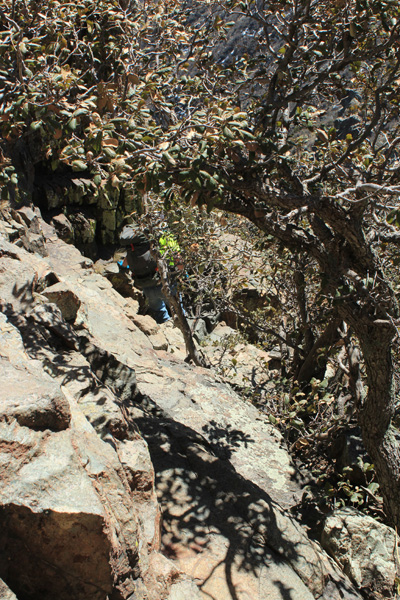 Eric descends through thick brush below the South Peak

After enjoying the views and recording our ascent in the new registry we began our descent. The chockstone was fun to descend under and the traverse and ramp went easily. We then fought our way through brush back to the ridge and savored a last view of the south face of the South Peak. We reached the upper saddle and descended to the road along a fence on the south ridge along an informal path.

Once back to the road Eric decided to descend more directly south down a slope to intersect an abandoned road that led to the Mascot Mine Road lower. This saved us about 1.5 miles of road hiking and went well. We followed the Mascot Mine Road out past the locked gate to our cars.

I enjoyed sharing the climb with these three experienced climbers and hope to share many more to come. At the end of the day I felt we had all “re-certified” ourselves as Arizona Mountaineers.

I had the good fortune to have spent most of my life in the Pacific Northwest, where I discovered the joys and addiction of hiking and climbing in the Cascade Mountains and other mountain ranges in the Western United States.
View all posts by Paul McClellan →
This entry was posted in Climbing, Hiking and tagged Arizona, Dos Cabezas Mountains, Dos Cabezas Peaks. Bookmark the permalink.