Linda and I started riding supported bicycle camping tours 16 years ago, and have continued doing so since then.

We typically ride at least one tour each summer through Bicycle Rides Northwest, a local bicycle touring company. These supported rides provide route cue sheets, support vehicles and food stops on the route, transport your camping gear from campsite to campsite, and provide a shower truck and catered meals at the campsites. With this support one can focus each day on riding the route knowing the destination is waiting at the end of each day’s ride. This year we rode their Montana Bicycle Ride, a 400-mile loop out of Missoula, Montana. 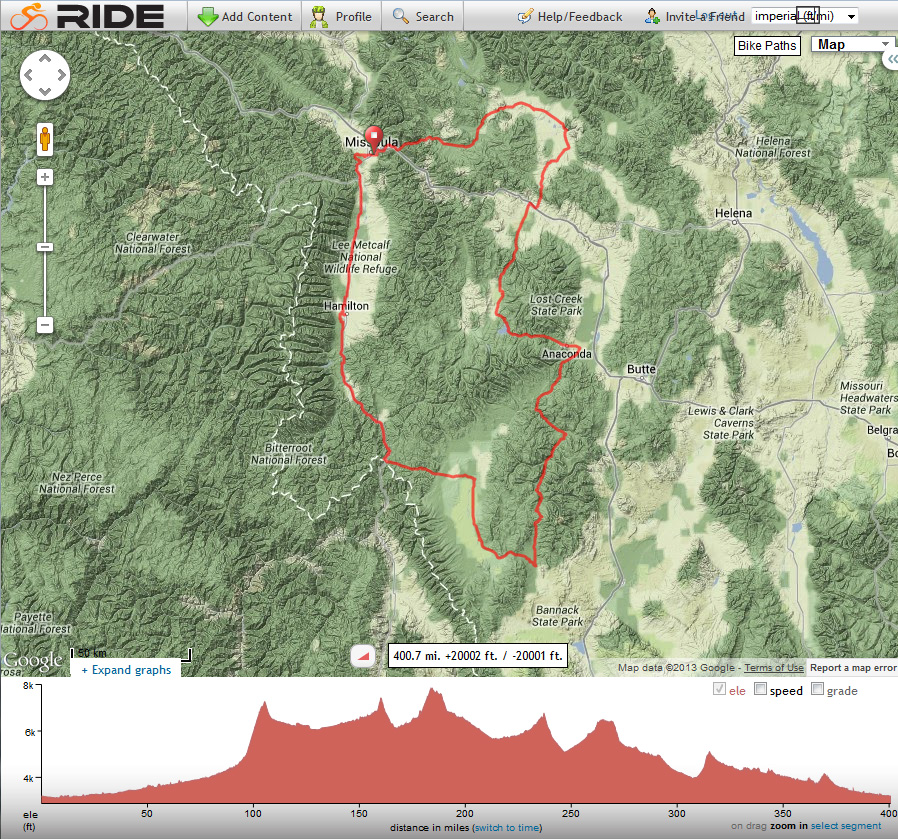 The route included 6 days of cycling from campsite to campsite, with one layover day where we could either ride a route from camp, or take a break from riding and explore the local community on foot. The route can be viewed in more detail here.

We arrived in Missoula and checked in on Saturday, July 20, joining about 270 other riders. We spent the night at the Sentinel High School grounds and left our car there for the week.

On Sunday we rode 72 miles from Missoula south to Darby along the Bitterroot Valley. I enjoyed the view of the Bitterroot Mountains to the west. Each peak seemed to be a ramp separated from the others by a deep valley. This was a warm day and it was getting hot when we arrived early afternoon at the Darby School. We were fortunate to find a tent spot on the school grounds that promised shade later in the afternoon (I carry a compass to help spot such promising sites).

On Monday morning we rode south and climbed to Chief Joseph Pass (7241′), passing over the Continental Divide. This was a long climb and I was glad to complete it early in the day. The long descent east from the pass was a joy – nice forest scenery, smooth pavement, a tail wind, and easy riding. The country opened up as we descended into the Big Hole Valley and the town of Wisdom, where the cycling became more tedious in the warm afternoon. After 75 miles we camped for the evening and night in a fresh-cut field at a working cattle ranch just north of Jackson.

The night-time and early morning temperatures had been mild so far on the ride, so we were not using the tent fly at night. The next morning, Tuesday, it was quite cold before the sun rose above the peaks to the east. I put on all my cold-weather bicycling clothes before leaving camp. We used the tent fly the remaining nights of the tour. 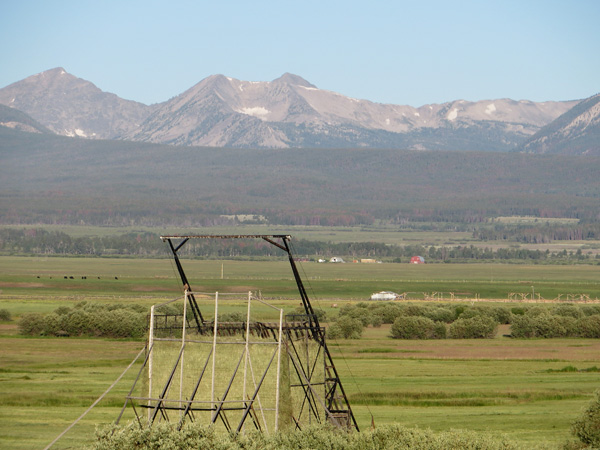 A beaverslide in Big Hole, Montana

We continued riding south through Jackson and the Big Hole Valley, hearing the mooing of cattle being moved through distant pastures. I rode into sunshine just before climbing out of the valley and it quickly warmed up as I climbed to Big Hole Pass (7400′). 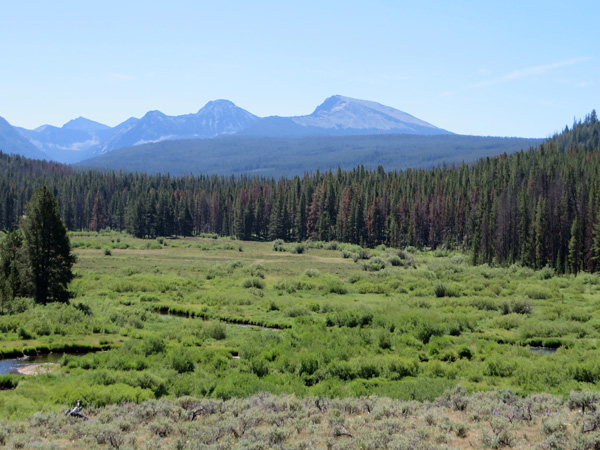 Saddleback and Comet Mountains from the Pioneer Mountains Scenic Byway

From Big Hole Pass we enjoyed a fast and consistent descent into Grasshopper Valley, then turned north on the Pioneer Mountains Scenic Byway. We climbed along Grasshopper Creek to a high divide (7800′), then descended along the Wise River to the tiny town of Wise River for our next campsite after riding about 65 miles. 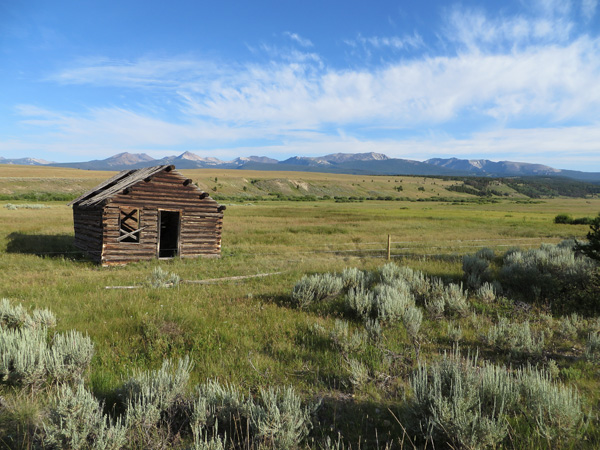 The next morning, Wednesday, was another cold morning on the bike as we rode west along the Wise River in the shaded valley with a cold head wind moving down the valley floor. It quickly warmed up after we turned north on a lightly-used forest road and climbed a pass with views of the Anaconda Range to our west. From there we descended to Anaconda and followed the Pintler Scenic Highway past Georgetown Lake to Philipsburg for a 67 mile day.

Linda and I took Thursday, our layover day, off the bike. After breakfast we hiked a ridge trail east of camp, then visited downtown Philipsburg on foot. I enjoyed visiting the Philipsburg Brewing Company and drinking their Rye Pale Ale and we both enjoyed lunch at Friday Night Pizza. The rest day was well-spent – the break from riding refreshed us for the remaining two days of the tour.

Friday started cold, as usual, but the first 20 miles were descending north along Flint Creek on excellent pavement and a tail wind. After passing east though Drummond we turned north and climbed over the Garnet Range and descended into the Bitterroot Valley. The last 10 miles for the day was along a busy highway and we were glad to reach the tiny town of Ovando, our campsite after riding 66 miles.

Saturday, our last day of the tour, started cool and for over an hour we experienced very little traffic on the highway as we rode towards Missoula along the Bitterroot River. The traffic picked up later in the morning but fortunately the paved shoulder was wide enough to maneuver around the rumble strip and other riders without exposing oneself too much to traffic. After about 54 miles of riding we reached our starting point of the tour, completing a scenic and interesting route in part of Montana I had never before visited.

I had the good fortune to have spent most of my life in the Pacific Northwest, where I discovered the joys and addiction of hiking and climbing in the Cascade Mountains and other mountain ranges in the Western United States.
View all posts by Paul McClellan →
This entry was posted in Bicycling and tagged Montana, supported bicycle touring. Bookmark the permalink.