For the past two winters we have traveled to Arizona to spend a few weeks bicycling and hiking in the sunshine. This year we spent about 8 weeks in Tucson, our new winter home. While settling into our new home we were able to bicycle around the Tucson area and I was able to hike several local peaks. This was a fine and badly needed opportunity to get into decent bicycling and hiking shape for the new year. 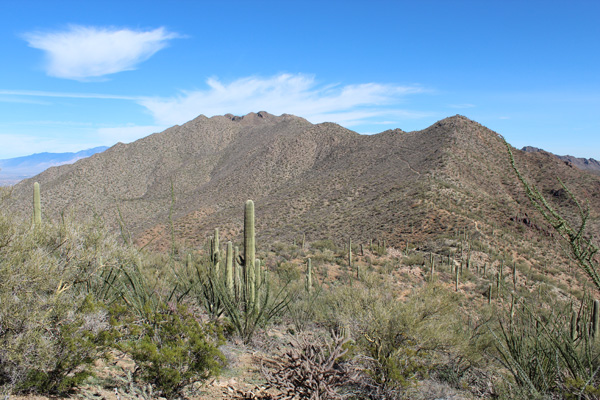 My first hike was up Wasson Peak in Saguaro National Park West (Tucson Mountain District) via the Hugh Norris trail on Thursday, February 19. The summit of Wasson Peak is the highest point in the Tucson Mountains with 2117 feet of prominence. It was a warm and sunny day and the hike was a good shakedown after months of relative inactivity. I enjoyed watching several USAF jets pass over.

By the end of the Wasson Peak hike my toes were sore. My feet seem to get larger as the years pass by. So I purchased larger boots and hoped they would work better. To test the boots before trying another peak I hiked to Hutch’s Pool in the West Fork Sabino Canyon, part of the Pusch Ridge Wilderness. I enjoyed the clear skies and ideal temperatures and found the pool full. My toes felt much better after the hike than after the previous hike, so I felt ready to try another peak hike. 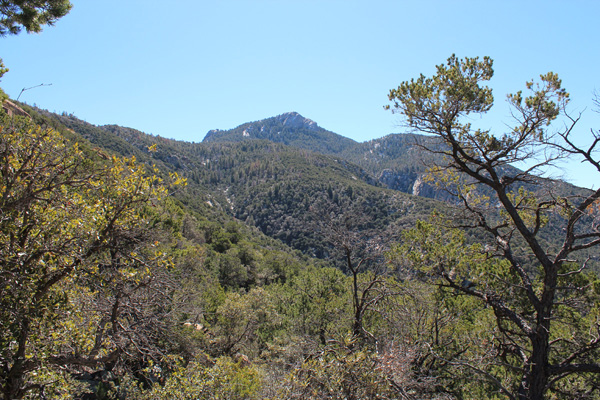 On Thursday, February 26, I hiked up Rincon Peak in Saguaro National Park East (Rincon Mountain District) from the Miller Creek TH. Rincon Peak is the second-highest peak in the Rincon Range and has 2282 feet of prominence. I crossed several creeks across the forest road on the way to the trailhead due to recent rains. The weather was clear and warm but breezy and cool on the summit. I found this to be a quite strenuous hike – about 16.2 miles and 4300 feet of gain. The Miller Creek Trail was steep, rocky, heavy eroded, and marked by cairns in ambiguous portions. Above that most of the route was through oak and pine forest on much easier trails. The last half mile or so of the route was steep and there was some thin covering of snow on the ground and trail. I arrived at the summit later than I had expected. I rested, had lunch, and took many photographs of the mountain scenes in the cool breeze.

I descended the same route hoping to make up some time but I arrived back to my jeep in the dark. I was glad to have descended the steep and rocky portion of the Miller Creek Trail before having to hike the last 20 minutes to the jeep by headlamp. I saw no other person on any of the trails that day, but watched several ravens circling about the summit rock cliffs.

On Tuesday, March 10, I enjoyed a pleasant hike up the summit of Mount Wrightson, the highest point in the Santa Rita Mountains south of Tucson with 4578 feet of prominence. Mount Wrightson is one of the 100 most prominent peaks in the 48 contiguous states. I took the Super Trail up and the Old Baldy Trail down, which provided me 360 degree views from the mountain of the surrounding valleys and mountain ranges. I enjoyed watching ravens circling about the summit cliffs and passing over the summit. I thought the hike up from Madera Canyon to Josephine Saddle on the Super Trail through oak forest was one of the most pleasant hiking experiences I have had in Arizona. I met several other hikers on the Old Baldy Trail and summit portions of the hike, but only one pair of hikers on the Super Tail portions. I expect to repeat this hike in the future.

The Sierrita Mountains are a small range southwest of Tucson. I had first noticed the range from the summit of Mount Wrightson. The Keystone Peak summit is the highest point of these mountains and has 2448 feet of prominence. It is accessible via a gated 4WD road from McGees Settlement.

On Friday, March 20, I drove to the gate at the first water tank in McGees Settlement. The gate was open and unlocked, but access was posted for authorized vehicles only and I parked my jeep there. I crossed through the open gate and enjoyed a pleasant road hike in ideal weather to the summit of Keystone Peak. The summit had many large communication towers and many ravens gliding around the towers apparently playing tag with each other. I had good views of the Baboquivari Mountains, Kitt Peak, and the Coyote Mountains from there.

From Keystone Peak it appeared that the peak immediately to its north, unofficially named “Keystone Peak North”, might be higher so I took advantage of a side road to visit that summit next and determined it was about 20 feet lower. I also hiked up the NW ridge of Placer Peak a short distance off the road and spooked two white-tailed deer near the summit. I enjoyed the hike back to McGees Settlement with an occasional F-16 escort above me. The gate was closed and locked when I arrived back to my jeep.

On Wednesday, March 25, I hiked up Mount Kimball in the Santa Catalinas. Mount Kimball has 1138 feet of prominence and lies to the west of Mount Lemmon on the Santa Catalina Crest. I chose the Finger Rock Canyon Trail due to its directness to Mount Kimball and the scenery it offered. It delivered on both accounts, but was steep, rocky, and slow going with many high steps and rocks on the trail. I found many varieties of flowers and steep rock cliffs to photograph. Shortly after meeting a descending hiker who was returning from the summit I reached the junction with the Pima Canyon Trail which I followed about 0.5 mile to the short access trail leading to the Mount Kimball summit. I enjoyed the views and playful ravens around me on the summit and wished I could linger longer, but I had a long, rocky, and careful descent to make and had to leave after only half an hour on top. 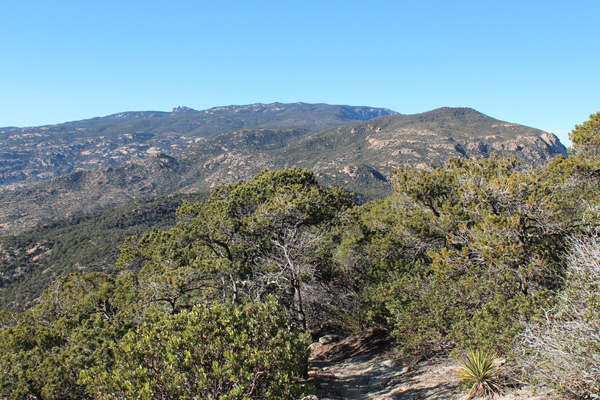 On Wednesday, April 1, I returned to the Rincon Mountains in Saguaro National Park East (Rincon Mountain District) to attempt to summit Mica Mountain. The summit of Mica Mountain is the highest point in the Rincon Range and has 4608 feet of prominence. Mica Mountain, like Mount Wrightson, is one of the 100 most prominent peaks in the 48 contiguous states. Like Rincon Peak it requires a long day of hiking to summit and return from the nearest trailhead. 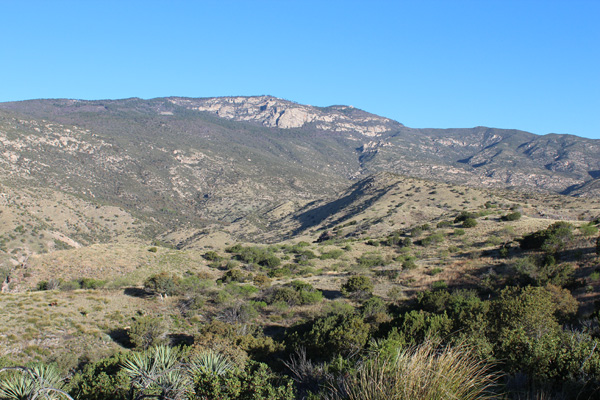 The previous evening I drove to the Turkey Creek Trail trailhead at the end of an interesting jeep trail to camp so as to allow an early start the next morning. The next morning I hiked the Turkey Creek Trail. At the top of the Turkey Creek Trail I negotiated several trails (Deer Head Spring, Switchback, Heartbreak Ridge, Fire Loop S, Bonita, and Fire Loop N) to reach the summit of Mica Mountain amongst Ponderosa pine. On the descent I made a side trip down the Mica Mountain Trail to Manning Camp to see Manning Cabin, then reconnected up with my ascent route. It was a long day of hiking but the weather was mostly clear with a brisk breeze and pleasant temperatures. It was a satisfying finish for my Arizona hiking for this season.

I had the good fortune to have spent most of my life in the Pacific Northwest, where I discovered the joys and addiction of hiking and climbing in the Cascade Mountains and other mountain ranges in the Western United States.
View all posts by Paul McClellan →
This entry was posted in Climbing, Hiking and tagged Arizona, Keystone Peak, Mica Mountain, Mount Wrightson, Rincon Peak, Sabino Canyon, Tucson, Wasson Peak. Bookmark the permalink.