Linda and I were unable to join Bicycle Rides Northwest last summer for a bike tour so we looked forward to their Washington Bicycle Ride 2016 this July. This year’s route was a loop out of Goldendale, Washington. It included the Yakima Valleys, White Pass, Columbia Gorge, mixed forests, and excellent views of Mount Saint Helens and Mount Adams. The tour proved to be the usual strenuous but fun and scenic Bicycle Rides Northwest experience. 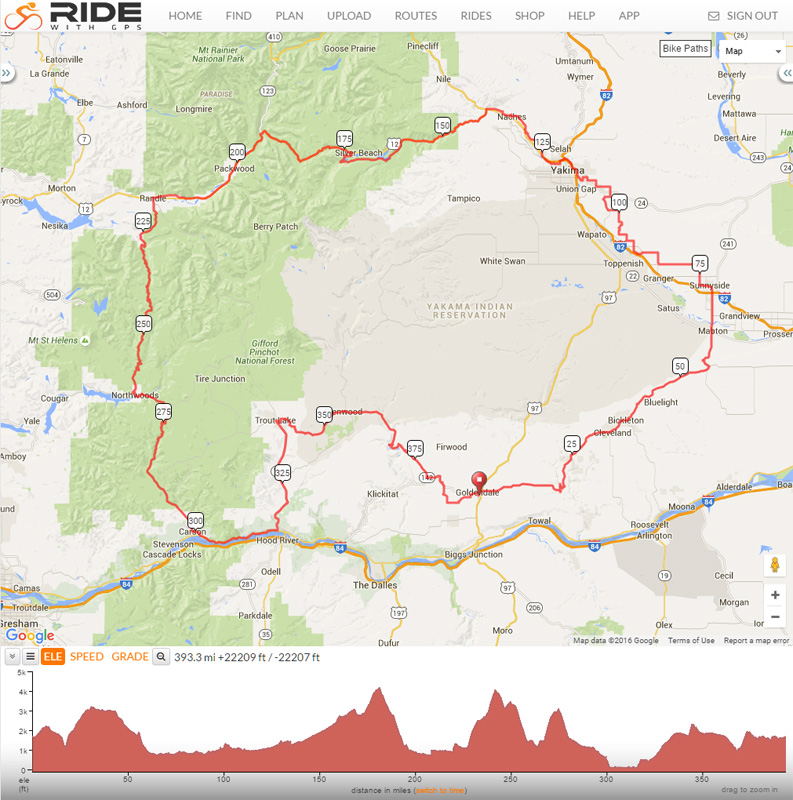 The riders left Goldendale riding east on the Bickleton Highway. The weather was ideal. I found my pace and got used to being passed by stronger riders. We dropped down to and crossed Rock Creek then resumed climbing moderate grades to Bickleton. We paused at our first well-stocked rest stop on the way. It would be a challenge not to overeat on this tour. 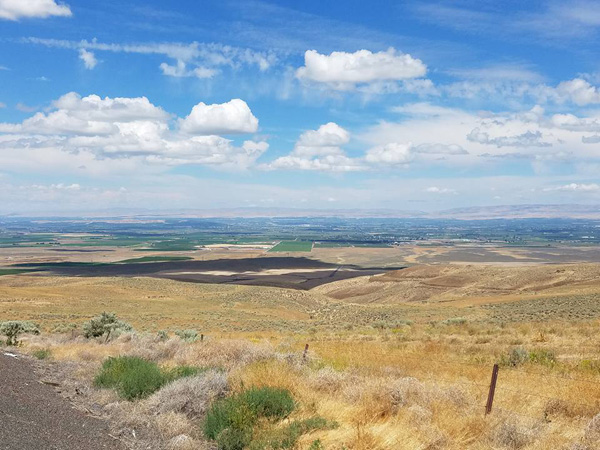 The Yakima Lower Valley from the Bickleton/Mabton Highway (Linda)

The route continued east on the Bickleton-Mabton Highway over rolling grades. Eventually we viewed the Yakima Lower Valley with its deep green irrigated orchards and vineyards surrounded by dry scrub land. 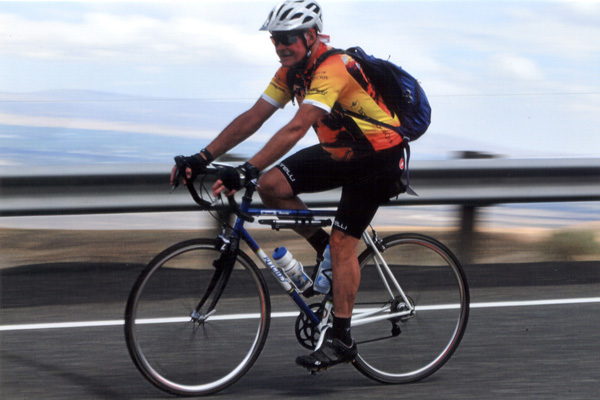 I enjoyed a fast descent to the valley. I spotted the tour photographer beside the road photographing us as we descended but I kept my hands on my bike rather than wave for the photo. We rode north through Mabton and continued onto the Mabton Sunnyside Highway to Sunnyside and our camp for the night. I felt stronger and pushed myself harder the last few miles to camp at Central Park.

The morning sky was cloudy. The forecast was for showers in the morning and early afternoon. Normally, one might be concerned by the prospect of quite hot weather bicycling through the Yakima Lower and Upper Valleys in July. This was not an issue this day. Linda and I felt only a slight mist a few times and rode over a few damp roads. Meanwhile much of the rest stop and destination camp crew experienced heavy rain during the day.

Although Linda was raised in the Yakima area, she was surprised to see so much more of the Lower Valley this day riding than she had seen in the years she lived nearby. We zigzagged on side roads to avoid busy highways. We found our first rest stop in Zillah. From here we climbed over Rattlesnake Pass and descended into the Moxie Valley rather than ride through Union Gap.

Our second rest stop was at Yakima’s Sherman Park. The crew reported they had experienced heavy rain earlier, followed by water sprinklers that had not been turned off for the day. The route continued north on the Yakima Greenway Trail along the Yakima River for several miles. We left the Greenway near Fruitville then turned west onto the Old Naches Highway towards Naches. We missed the showers that the Naches camp crew experienced. 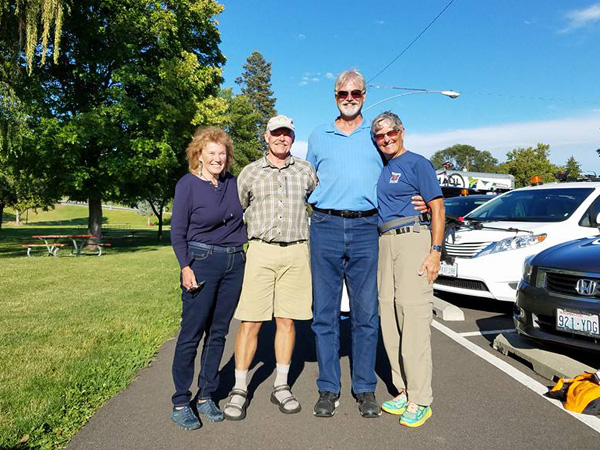 Linda and I showered and settled in at our camp and were dry in our tent during a heavy rain shower. Later two of Linda’s high school friends, Wayne and Louise, arrived. We enjoyed a fun visit at a local tavern before they returned us to camp.

Some clouds lingered above us during breakfast. We were hopeful that the clouds and rain prospects would dissipate later. We Naches on the Old Naches Highway then turned left onto US Highway 12 and started climbing to White Pass. There was traffic, including large trucks, but the shoulder was adequate and I thought the drivers were patient and considerate. 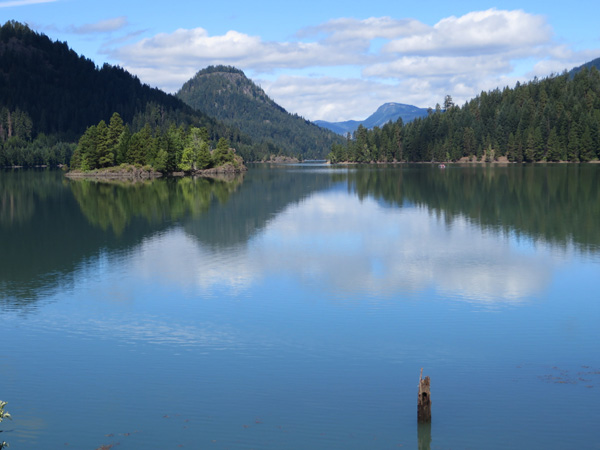 We left US Highway 12 onto Forest Road 1200 at Milk Creek for our first rest stop. From there we continued west through forest on the very pleasant FR 1200. The road passed by scenic Rimrock and Clear Lakes and under steep cliffs before returning to Highway 12 further west.

From here the climb to White Pass had an easy grade and scenic views, including a stirring view down on Clear Creek Falls just east of White Pass. We enjoyed our second rest stop at White Pass under dark clouds building above us that reminded me of Colorado afternoon thunderstorm clouds.

The last 25 miles of the day started with a fast and fun 3000-foot descent. I hit some rough pavement and lost one of my water bottles but I was able to retrieve it before any other bicyclist hit it. Once the steep descent ended a headwind fought us as we rode the rest of the way to the Cascade Peaks RV Campground, our layover camp for the next two nights.

The campground was pleasant. Linda and I took advantage of the layover day to relax and rest our muscles and sores by not riding. Instead, we did our laundry and recharged our electronic devices and storage batteries in preparation for the second half of the tour. This proved to be good preparation, especially for the next day’s ride.

This was to be the most challenging day of the tour. Fortunately, we were rested and the weather was ideal. We started by riding east on US Highway 12 and some side roads, then crossed the highway at Randle and rode south on Washington Highway 131. This road crossed the Cowlitz River and soon became USFR 25.

We had two main climbs this day. We anticipated the first summit to be the highest with the steepest climbing grades. The steep climb was in forest along Iron Creek to our first rest stop at Wakepish Sno-Park. From here we continued our climb to Elk Pass, the first major summit of the day. 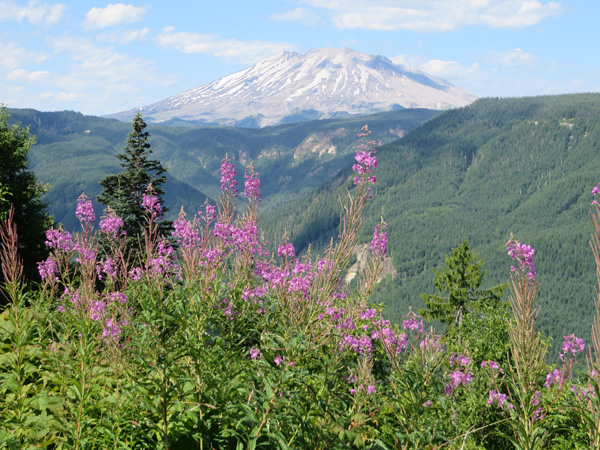 From Elk Pass we descended about 1000 feet on sometimes rough asphalt that demanded our attention. We then had a short climb that passed by some excellent views of Mount Saint Helens, including Clearwater Viewpoint. Fireweed decorated the roadside and riders’ photographs. 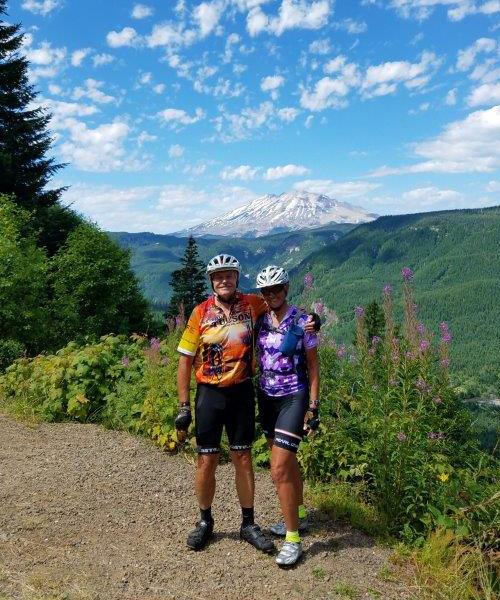 We began descending again in good spirits. The tour photographer photographed bicyclists as they passed by with Mount Saint Helens in view behind. The route dropped about 2500 feet to near Swift Reservoir where it turned east onto USFS 99 and crossed the Lewis River. 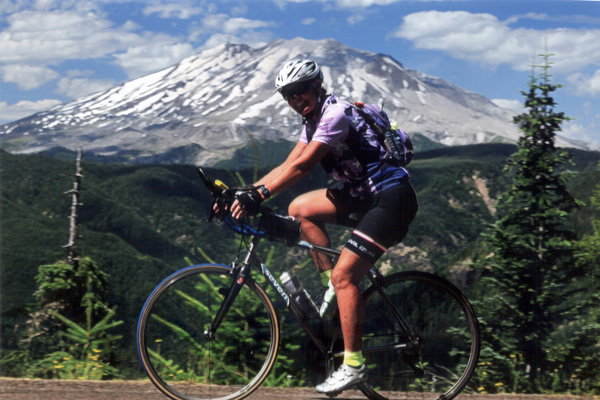 It was getting hot. I anticipated the climb ahead so I stopped at a market to get a Pepsi (they had no Cokes). Linda passed by as I was in the market and it was later that I caught up with her on the climb to share the Pepsi. It was a strenuous climb of 1500 feet to McClellan Viewpoint and our second rest stop. Linda and I lingered here to enjoy the welcome snacks and to rehydrate well. Here there was another fine view of Mount Saint Helens in the distance. From here we climbed another 1000 feet to Oldman Pass, passing by McClellan Sno-Park on the way. I wonder who the Overlook and Sno-Park were named after?

We delighted in the 1500-foot steep, curvy descent from Oldman Pass on excellent pavement, banking from side to side around curves. However, we suddenly passed stopped riders with one on the ground beside the road. The attending riders reported the fallen rider was under good immediate care and emergency help was on the way. The tour riders learned later in camp that the fallen rider had sustained a dislocated hip.

The descent grade lessened as we approached and turned onto the Wind River Road. After taking advantage of a water stop we followed the road along the Wind River into Carson and our evening’s campsite. We were pleased with our day’s accomplishment.

We arose the next morning under dark, low clouds and quickly packed our tent and gear. During breakfast it began to drizzle. I donned my booties to keep water out of my bike shoes before leaving Carson and was glad our tent was packed dry. 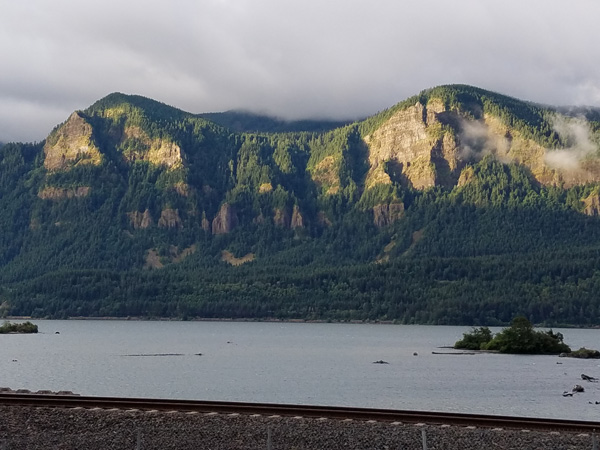 Across the Columbia River towards Oregon cliffs near Carson

The route soon descended out of the drizzle onto Washington Highway 14. Linda and I considered not following the tour route up the Cook-Underwood Road into the drizzly clouds. Instead we considered continuing on the highway with a stiff tailwind but unsupported to the continuation of the tour route further east. We decided to stay on the highway and were joined by our friend Marty. This choice took us through five short but narrow tunnels. We were careful to wait for openings in the traffic before entering each.

We regained the tour route and soon turned north onto Washington Highway 141A. From here we climbed along the White Salmon River, turned left onto Highway 141, and followed it to BZ Corner. The official tour route was to turn onto the Glenwood Highway and continue to Glenwood before turning west to Trout Lake. The next day route was to take us to Glenwood in reverse. Some tour riders had signed up for a rafting trip that afternoon and had been advised to ride Highway 141 directly to Trout Lake. Linda and I decided to take the shorter route. We enjoyed late morning lattes and scones in Trout Lake before arriving at camp nearby. Marty arrived much later. He took the longer route and reported that he had fought a strong headwind from Glenwood to Trout Lake.

The next morning was cold in camp and early on the ride. We climbed east on the Trout Lake Highway over a ridge to Glenwood and our first rest stop with a slight tailwind. This was an opportunity to thank the rest stop crew for their excellent support. 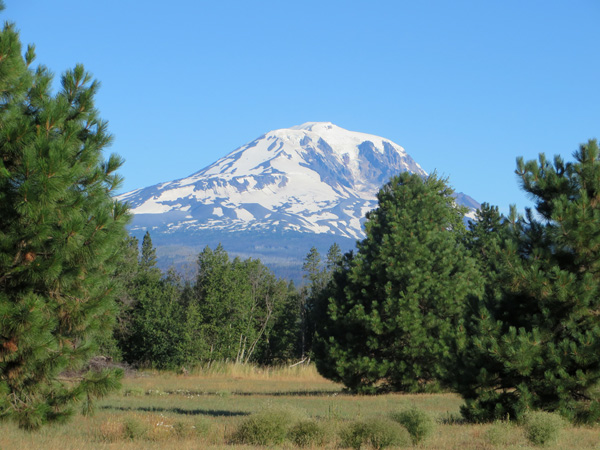 From Glenwood we continued east on the Glenwood highway and entered pine forest. We descended to and crossed the Klickitat River, then climbed to the top of the grade while enjoying good views of the valley. Here we enjoyed our last rest stop in open pine forest before continuing on to Goldendale and the end of the tour.

Linda and I enjoyed the Washington Bicycle Ride 2016. The weather was generally good and the route was interesting and scenic. The tour was well organized and staffed with friendly and helpful crew who provided nutritious and tasty snacks and food. We enjoyed the tour atmosphere and friendly fellow riders.

I had the good fortune to have spent most of my life in the Pacific Northwest, where I discovered the joys and addiction of hiking and climbing in the Cascade Range and other mountain ranges in the Western United States.
View all posts by Paul McClellan →
This entry was posted in Bicycling and tagged Bicycle Rides Northwest, bicycle tour, Washington Bicycle Ride. Bookmark the permalink.