Linda took a bad fall while rondenee skiing on Mt Hood while I was climbing in Ecuador. Over the following years the knee damage this accident caused became aggravated to the point she eventually needed to stop running and mountain climbing and have orthoscopic surgery.

While I was climbing Denali in June 1996 Linda began riding with the Salem Bicycle Club. I also began riding with them after my return from Denali and we found the club members to be friendly and and the club rides fun. At first Linda and I rode our newly purchased mountain bicycles on the club road rides, but it was difficult to keep up with the others who were riding street bikes. I dusted off my old Miyata bicycle and Linda bought herself a new Trek street bike. Our speed and mileage improved.

The bicycling around Salem, Oregon, is pleasant and scenic and we enjoyed several years of touring the Willamette Valley on day tours. We have since moved east across the Cascades Range to Bend and are now exploring Central and Eastern Oregon. Through our SBC friends we also discovered how much fun supported bicycle camping tours can be. We have participated in several, and look forward to many more. Finally, Linda has participated in many "packdown" (self-contained) bicycle camping tours and I have joined her on several. 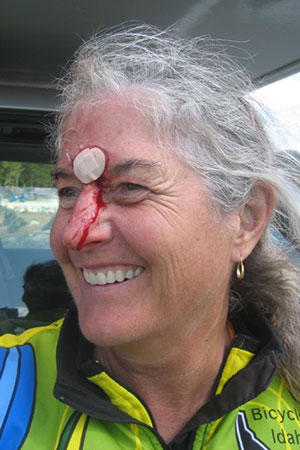