For several years I had wanted to climb Denali (aka Mount McKinley) in Alaska. I had participated in early planning of two expeditions with friends, but had to withdraw from both. Finally, in the Fall of 1995 I decided the time and circumstances were right to join a guided trip. In that way I could minimize the logistical planning and preparations and instead focus on obtaining equipment and getting training. I could also attempt an alternate route to the standard West Buttress route and learn from an experienced Alaskan mountain guide.

In my research I determined that Fantasy Ridge Alpinism (Telleride, Colorado) was a superior guiding service with a solid record of guiding on Denali and offering a West Ridge expedition. As it turned out, the weather conditions forced us to modify our route plans. The guides, Lyle and Jim, were excellent and I had a successful and very rewarding experience. Fantasy Ridge Alpinism has since transferred its Denali guiding permit to Alpine Ascents International in order to focus its services elsewhere.

1 June 1996 Fly from Portland to Anchorage, arriving about midnight.

2 June Get room at Anchorage Holiday Inn and move my gear in. Walk around downtown and rest in the room.

3 June Meet other clients (including Al, Bob, and Julian) and ride with van driver Bob Sloezen (Everest summitter) to Talkeetna and the Swiss Alaskan Inn. Meet lead guide Lyle Dean and assistant guide Jim Nigro. Lyle and Jim scrutinize our gear and instruct us to replace or add to our gear.

4 June Practice procedures and shop for our last gear. 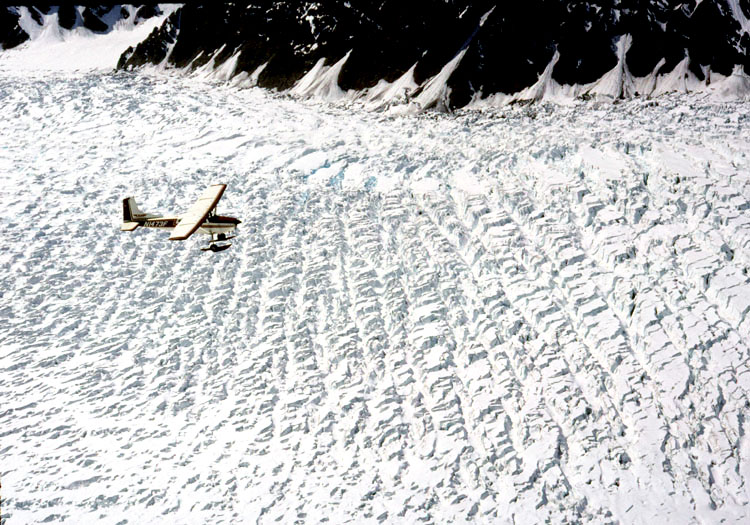 Crevasses on the Kahiltna Glacier 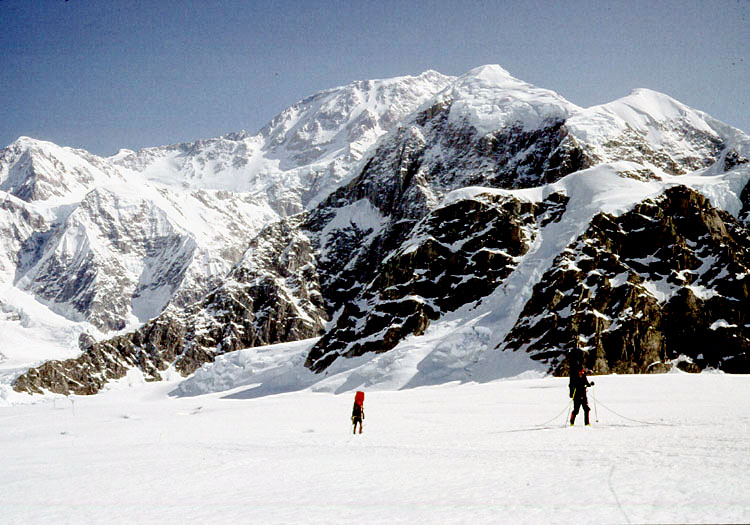 Denali from the Kahiltna Glacier

6 June Rest at camp until about 9pm, eating as much of the heavy food as we can and watching climbers descend the glacier. Move camp up near the base of Ski Hill (8000 ft) facing into the Northeast Fork of the Kahiltna.

7 June We are tentbound due to heavy snowfall.

9 June Lyle decides we have to move up, regardless of the weather. Start up the NE Fork, but more poor weather soon arrives and we instead turn up Ski Hill on the Kahiltna to cache our gear at 9700 feet. One of the clients decides to leave.

10 June Jim and Julian escourt the client to the landing strip while the rest of us move camp to our cache (9700 ft). Jim and Julian rejoin us at camp and report large avalanches in the NE Fork.

11 June Carry supplies to just below Motorcycle Hill (11000 ft) and cache it. We bury it deep enough that the ravens cannot raid our food.

13 June Carry supplies to just beyond Windy Corner (13400 ft) and cache it. Return to camp. It is a tiring day. 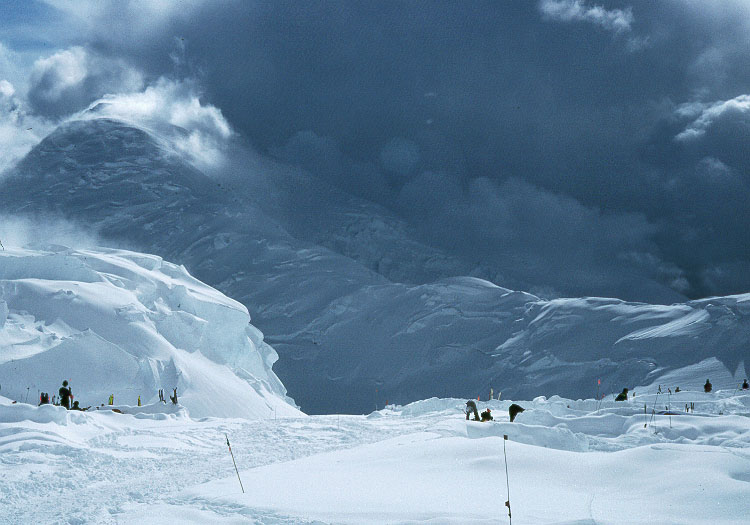 14 June We decide to have a rest day. I Wash underwear in a ziploc and dry them in the air. Watch a storm approach.

16 June Sleep in, then retrieve our cache we left below on the 13th. Select gear to cache higher, including food and fuel for five days.

17 June Carry gear to just below the West Rib at a bergschrund and level campsite (16300 ft). Cache the gear near two AAI tents. Bob suffers from stomach cramps and Julian has a headache.

18 June We take another rest day. It is windy in camp and there are big snow plumes off the Rib.

19 June We take a second rest day, waiting for a better weather pattern. I have low spirits due to a forecast of three more days of winds and clouds up high.

20 June A Low pressure system lingers, but the forecast is for it to break up in a day or two. Move camp up to the bergschrund cache (16300 ft). Julian gets carbon monoxide poisioning from the stove and altitude but eventually recovers in the evening. 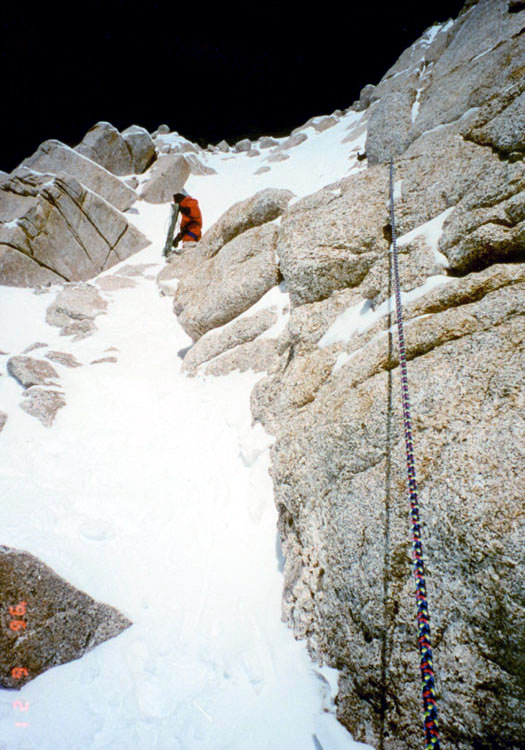 21 June We sleep in, then carry to 17200 feet. Lyle sets up fixed lines for much of the route. It is fantastic weather: little or no wind, warm temperature, and clear sky above. The forecast claims two more days of the same! 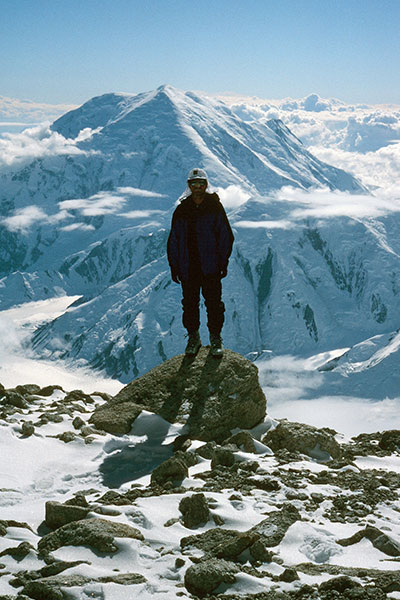 22 June Move our camp up the fixed lines to our highest campsite in beautiful weather. Anchor and protect our tents as best we can. A storm is forecasted to arrive as early as tomorrow night. 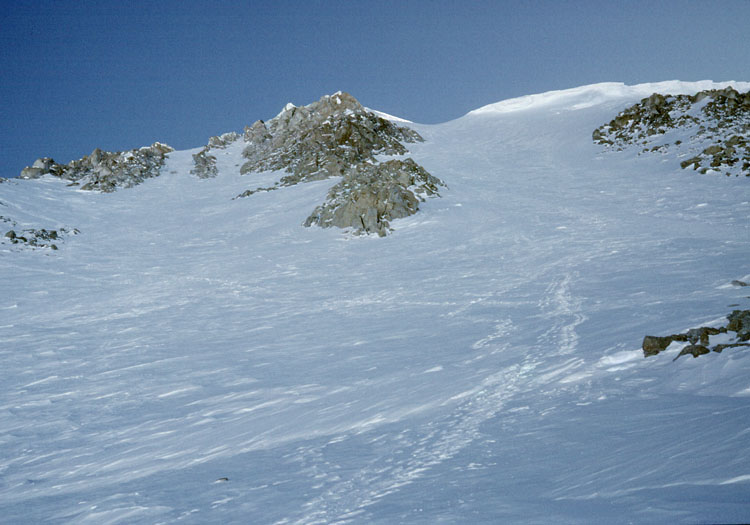 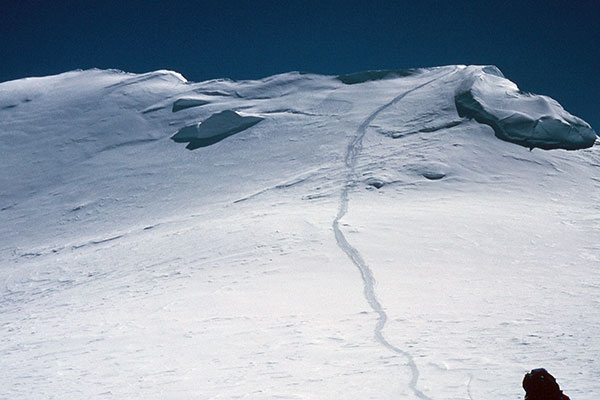 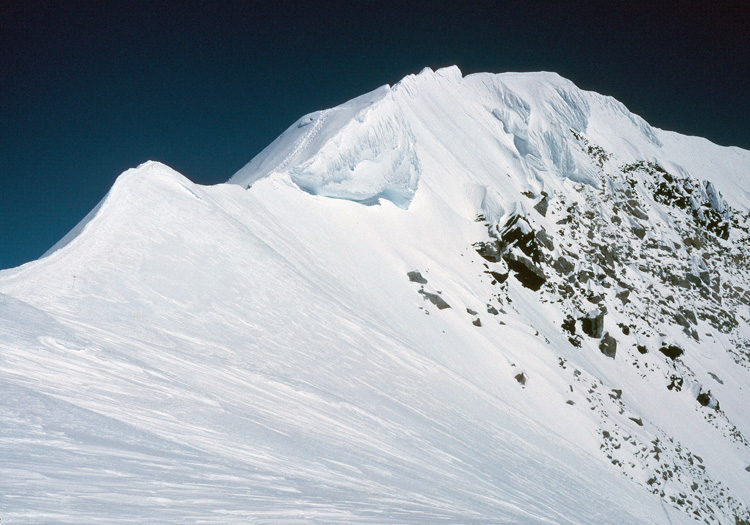 23 June We start brewing at 3am after little sleep. Jim is feeling too poorly to climb. The rest of us leave camp at 7:30am. I have cold feet climbing up the mixed rock and snow band above camp, but they warm up on the Orient Express. We take a very short break high on the Orient Express, then continue on. We move very slowly up Heartbreak Hill, and I watch the sky nervously. My mind seems a bit foggy. We eventually summit. The air is calm and the temperature is about -10 F. My mind clears on the descent of the Orient Express and I enjoy the rest of the descent to camp. We return to camp about 7:30pm where Jim has melted snow to replentish our water. We see a storm approaching, so decide to move down to 14400 feet. One of the clients is weak and short of breath at the bergschrund camp, so we camp there. 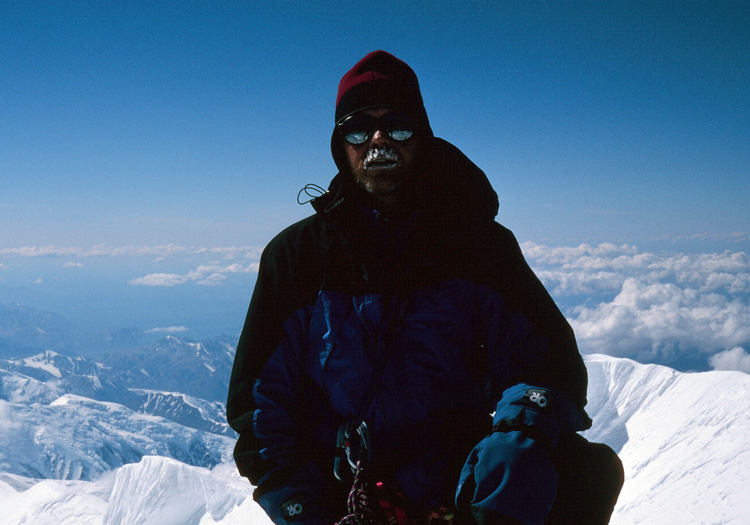 Paul on the Denali summit

24 June We rest and wait out the storm while the client recovers. A minor avalanche sluffs onto our tent. We are concerned about snow buildup on the Orient Express above our descent route to 14400, but by the end of the day we think it may have settled. 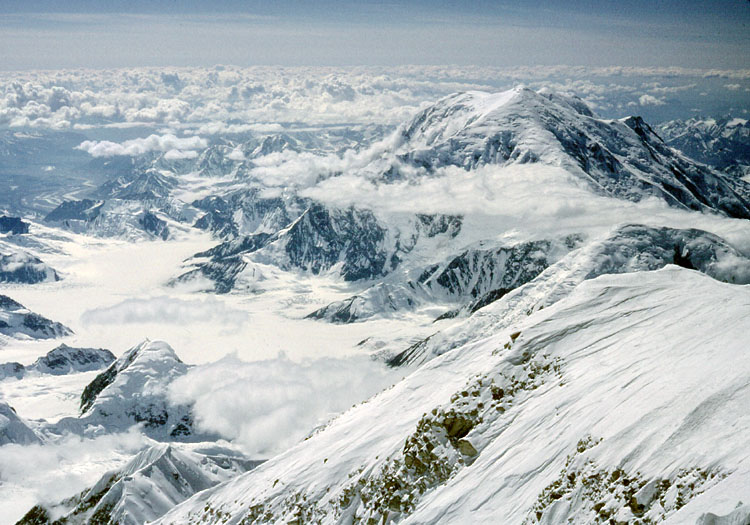 Looking down on the Kahiltna Glacier and Mt. Foraker from Denali

25 June We descend to the 14400 foot campsite and dig out and distribute the cache we left there on the 20th. We then descend past Windy Corner to our cache at 11000 feet below Motorcycle Hill. Windy Corner is not too bad, but we have blowing snow and low visibility as we descend the 700 feet to the top of Motorcycle Hill. We camp at the bottom of the hill because Lyle thinks conditions will be worse below and we are going too slowly to descend to better conditions at 8000 feet.

26 June We make good progress through Kahiltna Pass, but then get hung up in low visibility when we lose the wanded route below. We finally find the wanded route, but lose it again near the top of Ski Hill. We make camp and hope for better visibility tomorrow.

27 June The weather clears at and below our camp in the morning so we break camp and descend to the landing strip. Doug Geeting sends two planes while we stuff ourselves with beer and snacks at our cache there. The planes just take people -- the weather is threatening. One plane does return later to retrieve half of our gear.

28 June We wait all day in Talkeetna for our bags, which finally arrived about 9pm. I get a room at the Roadhouse since the Swiss Alaska is full. I explore shuttle opportunities for the Anchorage Airport tomorrow.

29 June Catch a 10:30am Talkeetna Shuttle Service and arrive at the airport at 1:30pm. It is early, but I do not want to risk missing the only shuttle today. Two of the other passengers are Steve Swenson and Alex Lowe [Alex later died in 1999 on Shishapangma in Tibet].

30 June I fly to Portland, Oregon, where Linda picks me up. She is startled at how much weight I have lost.

Pros and cons of using a guide service

I posted the following response to a query in the USENET forum rec.climbing: