Linda and I visited Marty in Lakewood in early October and we parked the trailer at nearby Bear Creek Lake Park. The weather in Lakewood was cold and wet at first, but a few days of dry weather came so I took the opportunity to hike four Colorado Fourteeners over three days while Linda bicycled in the Lakewood area. 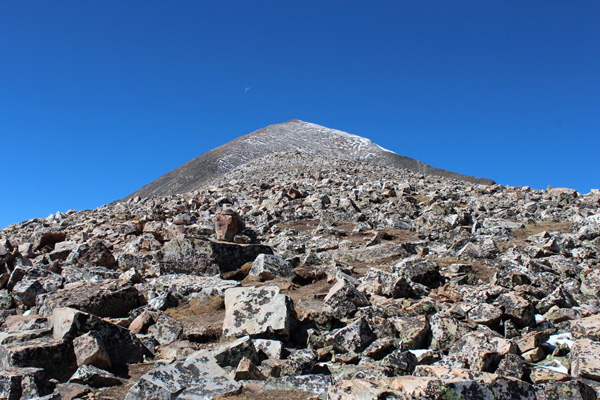 I began my hiking excursion on Sunday by driving to the McCullough Gulch Trailhead then backtracking and car camping above the Quandary Peak Trailhead. The evening was cool, but I enjoyed relaxing and preparing dinner wearing my down jacket. I enjoyed my winter sleeping bag and I slept comfortably in the cold night.

The next morning after breakfast I drove the short distance to the Quandary Peak Trailhead. There were several cars parked in the small lot at 8AM, but there was ample room for me to park near the trail.

The trail started climbing in forest and crossed a few primitive roads, but the trail was well marked and easy to follow. Soon the trail left the forest and the rest of the route up the eastern slopes was open. It was a clear, breezy, and beautiful early autumn day and I saw a few other parties ahead of me. 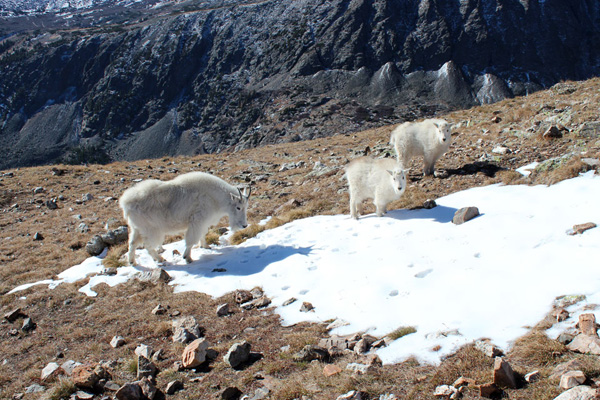 As I climbed I saw this family of mountain goats wandering about on the eastern slopes. I approached slowly and steadily and they seemed relaxed about sharing the trail with me.

The wind picked up as I climbed, but it was not excessive and the views were clear. I visited with other parties on the summit, identified and took photos of nearby peaks, and descended the trail to find a more sheltered spot for lunch before returning to the trailhead. The route was still popular at this time of year – I expect it would be very busy on a summer weekend – so my timing worked well for this hike. 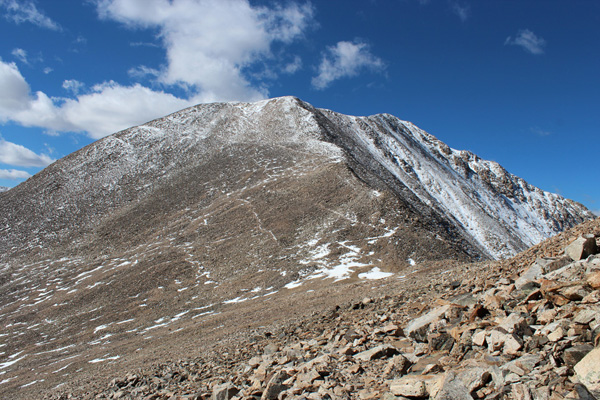 That afternoon I drove to Kite Lake, above Alma. The approach road is posted with a 20 mph speed limit and I was happy to oblige as parts of the route were rocky and the road deeply rutted near the end. Kite Lake is in an open basin below Mounts Democrat, Cameron, Lincoln, and Bross. The Kite Lake Campground consists of a large parking lot and campsites dispersed around it with a pit toilet. According to the forest service website the campground at Kite Lake was closed, but it was not gated and I paid for two day-use passes since the overnight camping passes were not available.

It was windy, and I positioned my car so I could relax and cook dinner in shelter. I had the lot to myself except for one hiker who passed through early in the evening who had been turned back from Mount Lincoln due to high winds.

My plan for the next day was to hike the “Decalibron”, a single loop and extension that would take me to the summits of Mounts Democrat, Cameron, Lincoln, and Bross. However, I saw on the bulletin board the announcement that Mount Bross was closed to the public (and has been since at least 2009) while various organizations worked with the property owner to grant access. This presented me with a quandary – should I respect the restriction in spite of the opportunity to summit all four peaks or have to return another time to summit Mount Bross? I decided to defer the final decision to the next day. The wind picked up and I retreated to my car early to read and spend the night.

The wind shifted and the gusts got quite strong during the evening and night and intermittently rocked the car as I lay inside. One other car arrived after sunset and parked at the other end of the lot.

The next morning I had a windy breakfast I started the Decalibron. I climbed the excellent trail to the saddle between Mount Democrat and Mount Cameron, then turned west and climbed the trail to the summit of Mount Democrat. The ascent route was covered in icy snow in spots, but the route was obvious and somewhat sheltered from the wind until I reached the summit “plateau” where the wind was strong. I visited with some other hikers, identified and took photos of peaks, and soon descended towards the saddle to continue my quest for the other summits.

From the saddle I started climbing the west ridge of Mount Cameron. The wind was stronger as I moved up the ridge and further away from the shelter provided by Mount Democrat. The wind was from behind me and I often turned to face it to verify I could safely descend if needed. Higher on the ridge the wind buffeted me harder and I put on warmer gloves and a balaclava, the latter to better secure my cap and to help me breathe when facing the wind. Eventually the wind gusts made walking more difficult in spite of my using hiking poles, and one gust seemed to threaten to blow me off the ridge as I climbed towards Mount Cameron. The route ahead was quite exposed to the wind and I decided to turn around rather than risk getting pinned down further on should the wind increase.

Hence my quandary about climbing Mount Bross was settled. I would return another time to hike the remaining three peaks when hopefully Mount Bross reopens to the public. 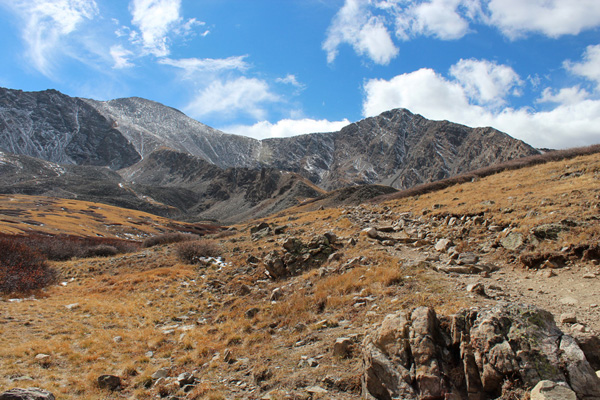 After returning to my car I drove back to I-70 and then east to the Bakerville exit. From here I drove up three miles to the Grays Peak Trailhead, which included a large parking area with pit toilet. The road had a few narrow sections, but several pullouts and the traffic was light this time of year.

The parking area is well protected from the wind with dispersed campsites nearby. I relaxed and enjoyed dinner with a view of Grays Peak before settling in for the night. After breakfast the next morning I started up the Grays Peak Trail by crossing Stewart Creek and climbing up the valley towards Grays Peak. I soon passed a hiking couple from Germany.

It was another windy day but not quite as windy as the day before at Kite Lake. There were clouds above the ridge to my left and stacks of lenticular clouds to the east of the Front Range and I watched the sky for developments as I hiked. After about a mile I rounded a corner saw Torreys Peak ahead of me as well as Grays. Grays Peak is to the left and Torreys Peak to the right in the photo above.

The obvious trail climbed and traversed a ridge between me and the peaks, then switchbacked up the southern face of Grays Peak. The trail was covered in thin and mostly dry snow in spots and this gave the hike an extra alpine flavor. The trail passed a junction with another trail leading down from the Grays/Torreys Saddle, and I saw a hiker descending. This was to be my descent route as well. 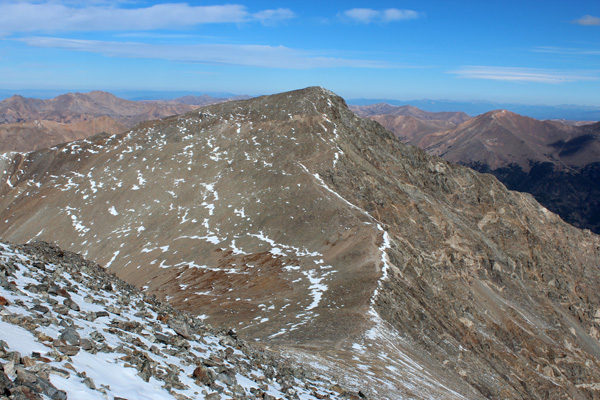 The trail continued to the windy, but tolerable and clear summit of Grays Peak. After scanning and taking photos of the surrounding and distant peaks and using my camera’s self-timer for self portraits I packed up and descended the north ridge trail towards the Grays/Torreys Saddle. 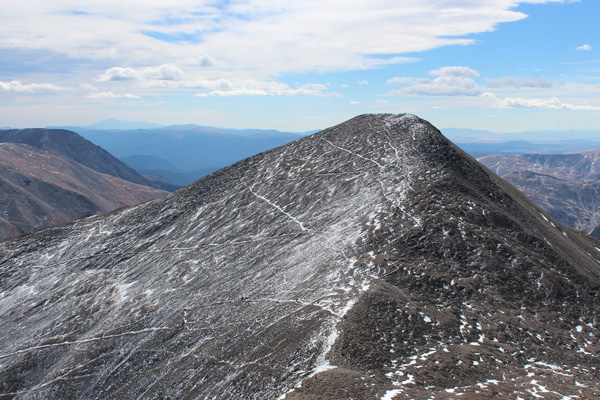 I passed the well-marked descent route and continued up the ridge towards Torreys Peak. At points the trail approached the steep drop to the east and I gave myself extra space in case the wind gusts from the west suddenly strengthened. I soon reached the summit of Torreys Peak, where I carefully placed and anchored my pack in a protected spot before enjoying and photographing the views around me. The snow-dusted and trail-carved face of Grays Peak gave it an interesting texture. The steep eastern face of Torreys Peak below me enhanced the alpine views.

I descended down to the saddle, took the connecting trail leading to Grays Peak Trail, and returned to the trailhead. I did not hurry, but lingered and savored the atmosphere at many points. The trip had been a success, with many peaks remaining to be explored in the years ahead.

I had the good fortune to have spent most of my life in the Pacific Northwest, where I discovered the joys and addiction of hiking and climbing in the Cascade Mountains and other mountain ranges in the Western United States.
View all posts by Paul McClellan →
This entry was posted in Hiking and tagged Colorado, Grays Peak, Mount Democrat, mountain goats, Quandary Peak, Torreys Peak. Bookmark the permalink.