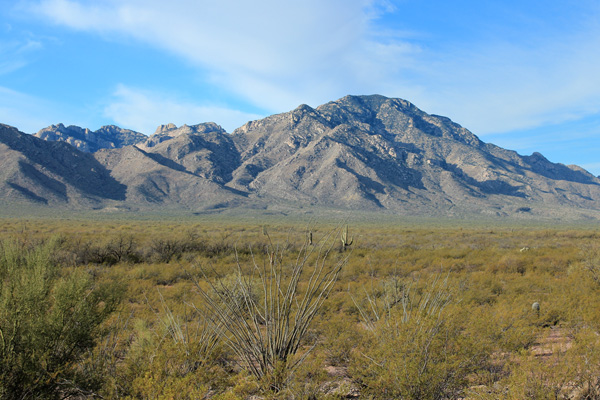 The Coyote Mountains from Arizona Highway 86

The Coyote Mountains are quite scenic but off trail travel is difficult with many rock cliffs rising above brushy slopes. There is an abandoned trail leading to the summit from the northeast corner of the Wilderness boundary. This trail is very helpful but is overgrown in many places with many species of thorny plants and can be difficult to follow. 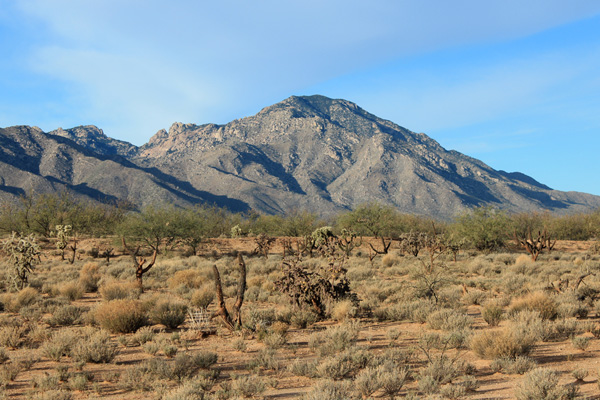 Last January Eric, Kay, and I first attempted Coyote Mountain. This time Eric, Fan, and I started from the trailhead two hours earlier than last year. It was a cooler day this time and we made good early progress. We were not accompanied by “Jo” the husky dog this time. We hoped he was traveling with his owners. 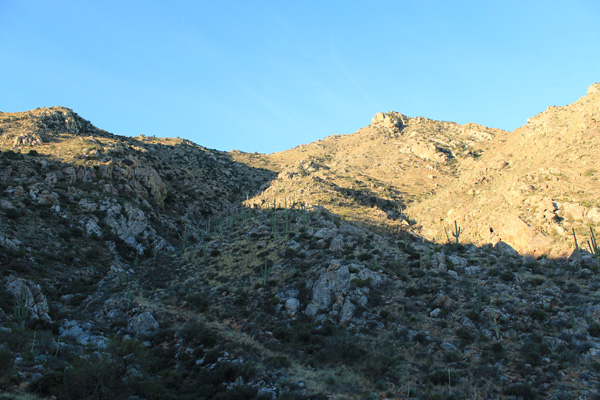 After about 1.5 miles of hiking an abandoned road we found a trail and followed it as best we could up a rocky and brushy rib between canyons to the familiar fenced saddle. From here we climbed and traversed up the ridge to the rocky point above us to the north. 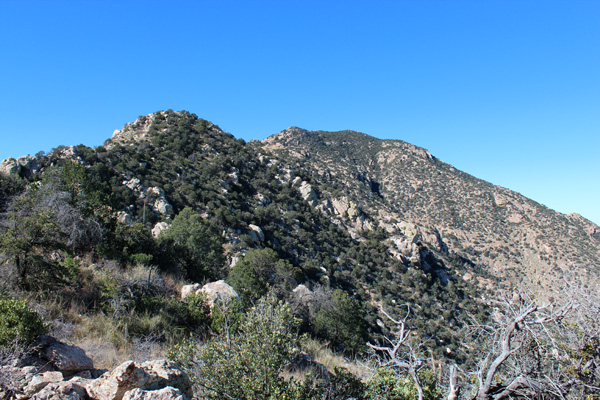 From this rocky point the trail sometimes follows the East Ridge ridge top, but often descends and traverses the ridge to the left (south) to work around cliffs. We were more experienced in following the trail this year than last, especially knowing to look around large yucca and small trees that grow in the trailbed. 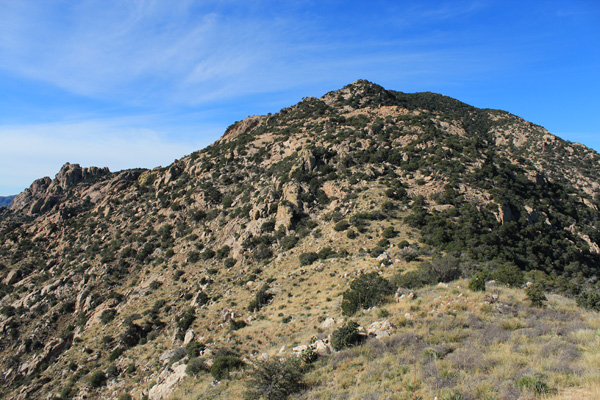 The Coyote Mountains Highpoint from the upper East Ridge

It took longer than expected to reach the upper saddle on the East Ridge. From here, the summit does not look so far away, and after last year’s experience we discussed whether it made sense just to head directly up towards the summit. But the direct route would climb over or between many cliffs separated by thick brush. We decided the trail, in spite of its poor condition and extra ups and downs, would give us a better chance to succeed.

Kitt Peak from the highpoint of the Coyote Mountains

We continued following the trail as best we could as it traversed below cliffs and over rocky ridges before turning more directly upwards. We eventually lost the trail and followed our own sense of direction and reached an open spot just west of last year’s high point. From here the route above looked open and the summit seemed close above us. This summit turned out to be a false one.

We reached the false summit well after our agreed upon turn around time. From there it appeared we had thick forest to push through along the summit ridge to reach the actual summit. Eric and I decided we had to continue and tag the summit. Fortunately, after dropping down into the forested ridge we found traces of the old trail which helped us through the oak and pine forest to the summit. 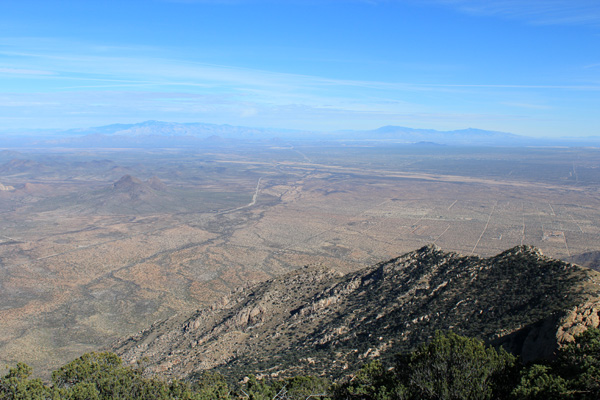 Towards Tucson from the Coyote Mountains Highpoint

Eric and I savored the views as long as we could before starting our long descent. Kitt Peak rose nearby to our west. Our ascent ridge seemed far below us to the east. We were happy, but well aware we had a long descent ahead of us.

As expected part of the hike out was by headlamp. I had advised the Border Patrol that morning of our plans and perhaps as a consequence we were not accompanied by a Border Patrol helicopter as we descended in the dark as we were last year. We enjoyed the rest of the evening relaxing at the trailhead and camped there for the night.

I have posted my trip statistics and GPS track here.

I had the good fortune to have spent most of my life in the Pacific Northwest, where I discovered the joys and addiction of hiking and climbing in the Cascade Mountains and other mountain ranges in the Western United States.
View all posts by Paul McClellan →
This entry was posted in Climbing, Hiking and tagged Arizona, Coyote Mountain, Coyote Mountains. Bookmark the permalink.