On March 8 Michael Berry and I climbed Mount Devine, the high point of the North Comobabi Mountains on the Tohono O’odham Indian Reservation north of Sells, Arizona. Mount Devine is the 75th most prominent peak in Arizona, with 1983 feet of prominence and 4783 feet of elevation. 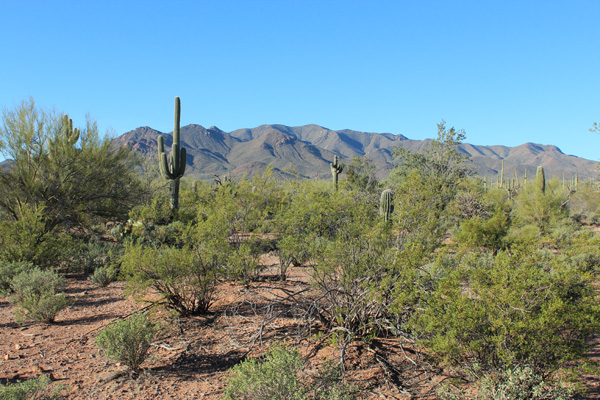 The North Comobabi Mountains to the south from where we parked

We drove in on an abandoned dirt road towards the mountains from the north, squeezing between palo verde trees and driving over 2-3 foot bushes. The road disappeared after only 1.4 miles, but we were glad to have covered as much distance as we had as the mountains still seemed far away. 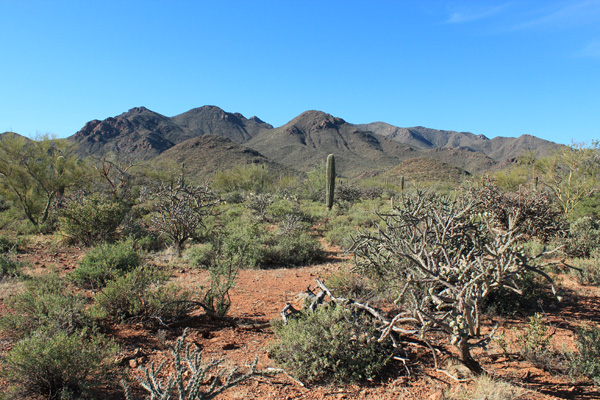 We hiked from our parking spot towards Mount Devine, sometimes following cattle tracks, while avoiding brush and cactus as best we could. It appeared that the summit was the rounded peak on the skyline just right of the lone saguaro in the above photo.

The tortoise begins to come out of his shell

It was a warm day and the ground surface was rocky and unstable at times. By avoiding brush and cactus we added some distance to the route. We had the pleasure of meeting a tortoise on our hike in. I saw its shell amongst the rocks below my feet. At first the tortoise hid in its shell, but gradually began to peek out after I placed it in nearby shade. I took the encounter as a good omen for our climb. 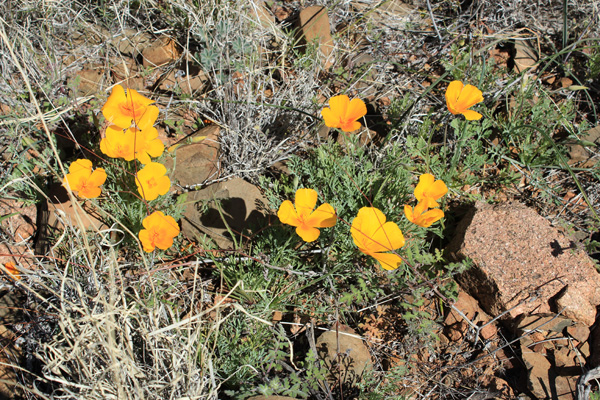 Some of the slopes were decorated with poppies

Poppies decorated several slopes on the route and added color and cheer to our day. I tried not to step on any. 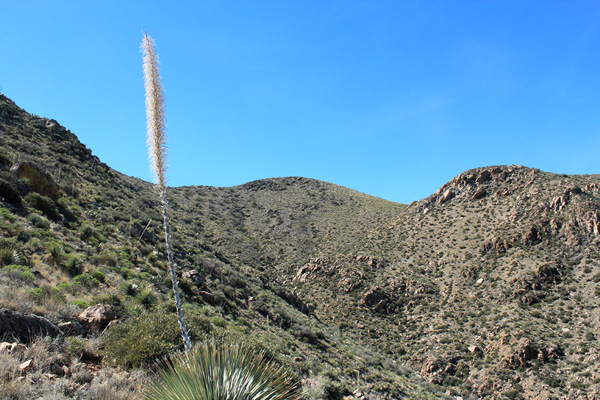 The Mount Devine summit from our ascent ridge

Our direct route took us over a saddle, across washes, and finally up the northern slopes. We ascended the ridge immediately to the left of the summit. This ridge had some very short class 3 moves near the top. 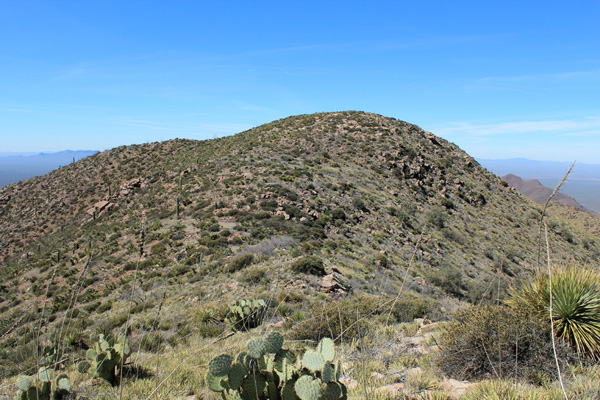 Looking across to the Mount Devine summit from the east

I stopped for a break after reaching the summit ridge while Michael continued on towards the summit a short distance to the west. When I continued on I soon crossed a field of “shin daggers”. My mountaineering boots helped me deal with them. 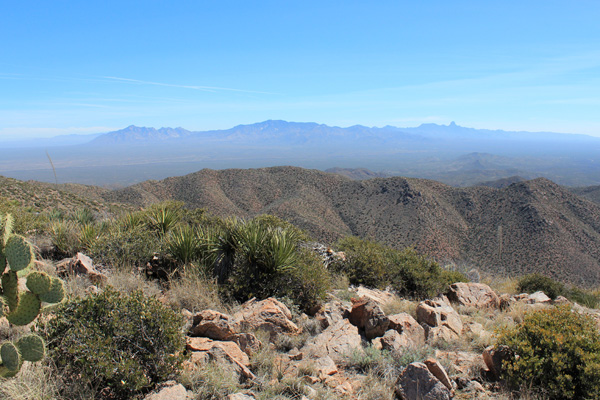 We had the summit to ourselves and the ravens and enjoyed identifying the peaks and mountain ranges around us. Michael found the summit registry and we added our names to the list. There were few other entries recorded over many years. The oldest paper sheets were fragmenting. 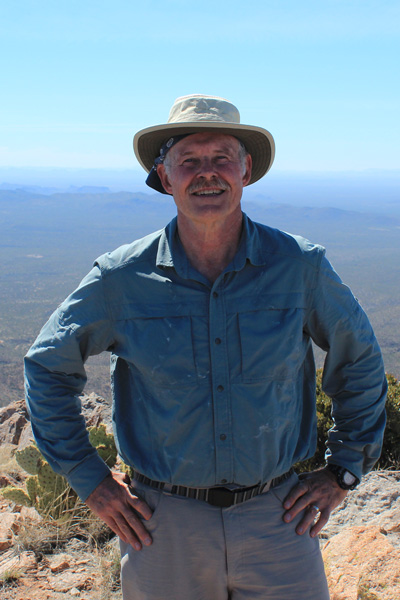 I am glad to be on the summit, but expect a long descent

I was quite tired but felt better after rest, lunch, and washing down electrolyte capsules and was glad to have carried three liters of water and electolyte.

Michael Berry in good spirits on the summit.

Michael Berry was in good spirits and took a quick nap while I finished my photos. Michael is a very active peakbagger with ambitious goals and many years of peakbagging ahead.

We took a steeper and more direct route down the north ridge to the lower valley. From there we avoided some brush by descending a sandy wash over several dry waterfalls. After leaving the wash we regained our approach route and hiked back to find my Jeep amongst the brush. My GPS was very helpful.

We were happy to have had each other as companions on this strenuous and remote hike. As an aside, the Border Patrol stopped us at their checkpoint on the return to Tucson. Apparently their German shepherd working dog thought the back of my Jeep smelled interesting. We stood aside and he explored our packs and the back of my Jeep but did not find anything and the officers eventually let us continue on.

I had the good fortune to have spent most of my life in the Pacific Northwest, where I discovered the joys and addiction of hiking and climbing in the Cascade Mountains and other mountain ranges in the Western United States.
View all posts by Paul McClellan →
This entry was posted in Climbing, Hiking and tagged Arizona, Mount Devine, North Comobabi Mountains, tortoise. Bookmark the permalink.