In middle of the last week of July I spent three days hiking prominence peaks in the Western Oregon Cascades. I visited Carpenter Mountain above the McKenzie River, Chucksney Mountain (north and south summits) above the Aufderheide Forest Drive, and Olallie Butte north of Mount Jefferson. The weather was quite warm with clear skies. 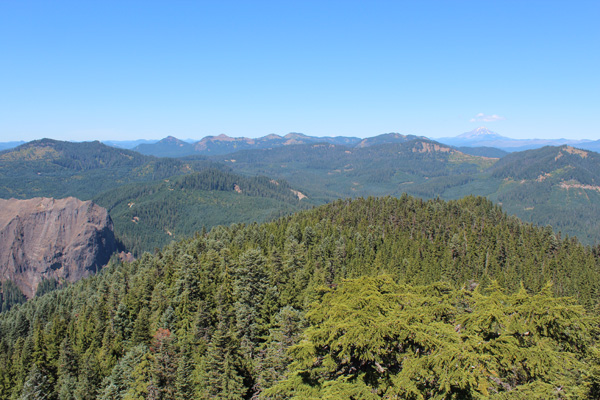 I began by driving to the Carpenter Mountain Trailhead, then hiking the trail to the Carpenter Mountain Lookout. This hike is only one mile long with 900 feet of gain to the lookout. The last few feet to the lookout building climbed up some rock slabs. The attendant was friendly and we chatted while I viewed and photographed the scenery from the balcony. In the above photo you can see Wolf Rock on the left, Iron, Cone, and Echo Mountains are in the center skyline, and Mount Jefferson is to the right of them in the distance. 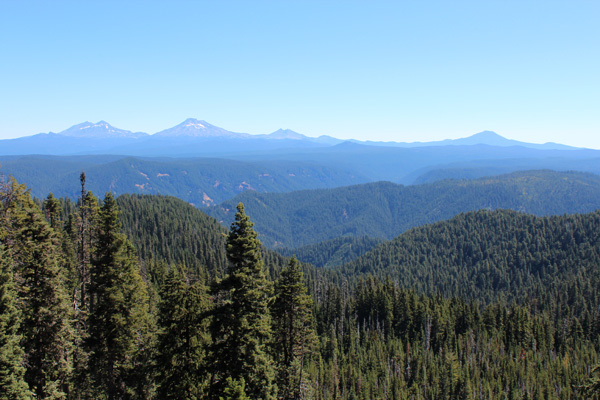 I returned to my Jeep and drove up the Aufderheide Forest Drive to the Box Canyon Horse Camp. I found a nice campsite in the forest campground and spent the evening and night there.

The next morning I relocated to the unmarked Grasshopper Trailhead near the campground. I began by hiking up the Grasshopper Mountain Trail to the upper junction with the Chucksney Mountain Trail and then headed north on that trail.

Near the Chucksney Mountain south (true) summit I left the trail and bushwacked uphill to the the summit rock cairn and “registry” in a glass bottle. I searched about a bit to verify this was the highest point and decided it was.

From there I bushwacked north to regain the trail, then followed it north towards the north summit. The best views of the hike were from the ridge between the summits. The above photo is looking east from Chucksney Mountain. On the horizon are the Three Sisters, Broken Top, and Mount Bachelor. The Aufderheide Forest Drive (and the trailhead) is in the canyon far below.

I enjoyed hiking Carpenter and Chucksney Mountains and seeing the Western Cascades, in which I had spent so many years exploring in years past, from such prominent summits. 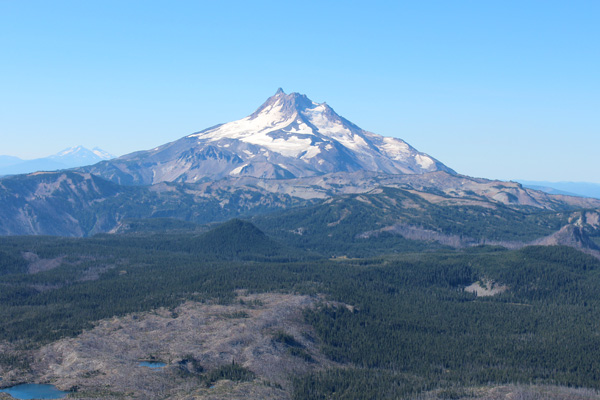 That afternoon I drove to near Olallie Butte and camped at the Olallie Meadow Campground. It had been a hot day and I was glad to be at about 4500 feet of elevation with cooler temperatures. There were only one other party camped in the well-spaced sites in the pine forest, and I enjoyed a very pleasant evening and night there.

The next morning I parked at the Olallie Butte Trailhead. The trail was posted as crossing on the Warm Springs Indian Reservation with no unauthorized access. I understood the restriction was not enforced and I took my chances that I would not be apprehended.

The Olallie Butte Trail was in excellent shape. It soon crossed the Pacific Crest Trail and gradually climbed to the south summit with great views of Mount Jefferson and the lakes below to the south. In the above photo Mount Jefferson is in the center with the Three Sisters to the left of it. It was sad to see the poor condition of the glaciers on Mount Jefferson over which I have traveled many times during the past decades. I have been fortunate to have climbed Mount Jefferson during decades when the glaciers and snowfields were healthy and offered fun and safer climbing alternatives to the loose scree and rocks covering much of the mountain.

I hiked over to the north summit, where the remains of a lookout were located, and I relaxed over lunch. I savored the descent on the trail and met only one couple low on the trail.

I had the good fortune to have spent most of my life in the Pacific Northwest, where I discovered the joys and addiction of hiking and climbing in the Cascade Mountains and other mountain ranges in the Western United States.
View all posts by Paul McClellan →
This entry was posted in Hiking and tagged Carpenter Mountain, Chucksney Mountain, Olallie Butte, Oregon. Bookmark the permalink.