Oregon’s Blue Mountains are uplift mountains located in Northeast Oregon and Southeast Washington. This mountain range consists of several subranges and is a part of the larger Columbia River Plateau. A friend of mine and I had scheduled an attempt of Matterhorn Peak in the Jarbidge Mountains of Northeast Nevada for early June. Since my travel route passed through Oregon’s Blue Mountains I decided to visit several prominence peaks there on my way out and back to Northeast Nevada. Due to the snow and high water conditions in the Jarbidge Mountains visiting prominence peaks in the Blue Mountains proved to be the highlight of my trip. 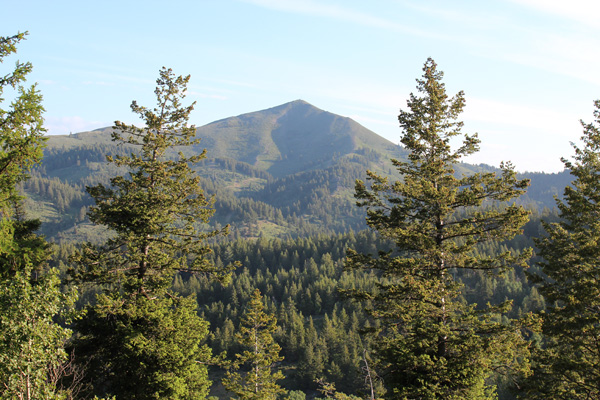 I began my trip Wednesday June 8 by driving east from Bend through Baker City onto I-84. At Exit 338 I left I-84 and drove north on the Lookout Mountain Road towards Big Lookout Mountain. Once off I-84 the views were all new to me and I enjoyed the 15 miles of good gravel road climbing up ridges into the forest. Eventually I found the access road leading to the summit of Big Lookout Mountain and parked nearby.

Big Lookout Mountain (7080 feet) is the 18th most prominent peak in Oregon with 3080 feet of prominence. The short road hike was protected by a locked gate and gained about 900 feet to the summit. The summit provided great views of surrounding mountains and the deep Snake River Canyon to the east. It was fun to see the distant Elkhorn and Wallowa Mountains from a different perspective, and I identified several prominence peaks I hoped to visit later on this trip.

I returned to my Jeep and found a nice campsite a short distance off the road for the night with protection from gusty winds. 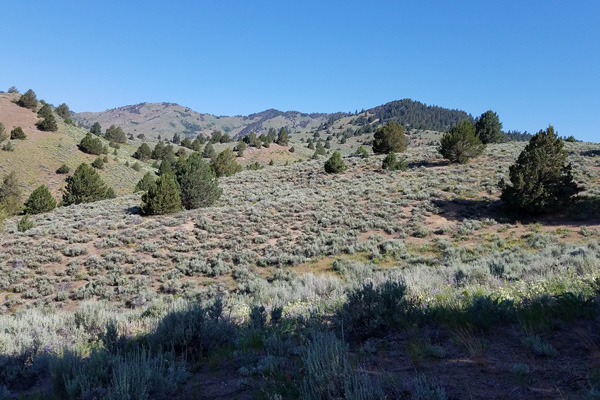 The next morning, June 9, I drove back to I-84 stopping several times on the way for photos of the views in the morning light. Among other peaks I recognized Pedro Mountain, my goal for the day. Pedro Mountain has 2055 feet of prominence, the 70th most prominent peak in Oregon. Pedro Mountain is protected by private lands posted no trespassing. My first goal of the day was to find a place to park allowing me access to Pedro Mountain without obviously trespassing on private property. In this I had the help of a trip report by George Burgess who thought he had done so.

I drove east on I-84 a short distance, took Exit 340 signed “Rye Valley”, and followed Dixie Creek Road west. Dixie Creek Road soon became good gravel and I followed it to Rye Valley. Here I got my first view of Pedro Mountain. From Rye Valley I turned south onto Mormon Basin Road. The road passed close to the South Fork Dixie Creek below a steep slope and I found a nice shaded parking spot without any fences or signs in view. A car soon drove by and the occupants were cordial towards me which seemed encouraging.

I tried to follow the route George had taken, but got off route at a fork where I went right rather than left. This headed too far east and I had to traverse brushy slopes to get back on route before climbing to the summit. Here I savored the summit views with the satisfaction of not being a criminal.

On my descent I tried to better follow the planned route down along ridges and through forest. However, I did have to jump an unexpected fence. Lower I squeezed around a locked gate and discovered that I had been trespassing and would be cited. Fortunately no one did so and I returned to my intact Jeep safely, waving at more cordial drivers as I packed up. I decided to motel in Mountain Home, Idaho, that afternoon on my way towards the Jarbidge Mountains of Nevada. 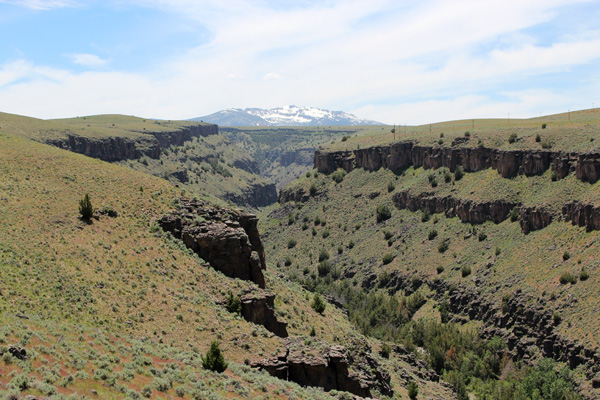 Jarbidge Mountains from above the East Fork Jarbidge River

The Jarbidge Mountains held much more snow than I had planned or prepared for and crampons would be needed to climb to the summit of Matterhorn. I explored the route into the Matterhorn Trailhead but only got as far as the first “creek” crossing. This crossing is described as sometimes challenging for 2WD vehicles. It would have swept my Jeep away if I had tried crossing it.

I found the only spot in Jarbidge with cell coverage and advised my friend who had planned to make the long drive to Jarbidge that evening of the mountain and road conditions. He and his climbing partner eventually decided to climb another peak in Idaho. I found a nice campsite along the fast Jarbidge River for the night at the Pine Creek Campground. Although it had been a long drive to Jarbidge it is a remarkable place to visit. I expect to return another time to climb in the Jarbidge Mountains. 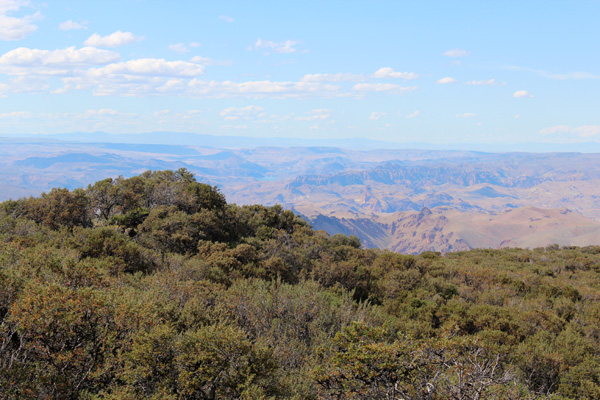 Saturday, June 11, I drove out of Jarbidge to return to Oregon’s Blue Mountains. I entered Oregon on US 95 heading south towards Jordan Valley. My plan was to hike Mahogany Mountain north of Jordan Valley. I turned west on a road signed for Jordan Craters and followed driving directions and a GPS track from Dennis Poulin’s trip report.

Mahogany Mountain is the 85th most prominent Oregon peak with 1892 feet of prominence. The mountain does not appear impressive from a distance but the long drive in was an adventure. I was glad to have good directions, backed up with topo maps, prerecorded GPS way points, and my Jeep.

I drove high on Mahogany Mountain and stopped and parked at the last T junction short of the locked gate at about 6000 feet. The road was becoming rather indistinct in the lush brush and wildflowers and the road steepened considerably there. I followed the road to the locked gate, climbed over the gate, continued over two passes, and hiked across open country and thin mahogany forest to the summit. The best views from Mahogany Mountain were looking down on Lake Owyhee and Leslie Gulch to the northwest.

I returned to my Jeep and drove most of the way out to US 95 in the early evening. My topo map indicated an abandoned airfield south of the road and I made that my campsite for a pleasant evening and starry night. 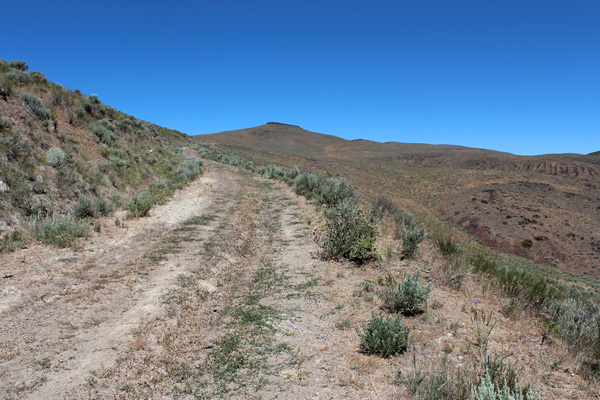 On Sunday, June 12, I drove north of Vale, Oregon, on US 26 and tried to access Cottonwood Mountain along a promising route I had checked using satellite images. However, I quickly came to an open gate decorated by “no trespassing” signs of various flavors. Although I was not sure what these signs meant in the context of an open gate I decided to try another route.

I drove south to Bully Creek Reservoir and followed the road west looking to access a road leading to the summit from the south. This time I passed through an open gate with a “no trespassing” sign mounted on the adjoining fence and interpreted this to mean not to leave the road bed. Further on I approached a closed gate, but noticed a side road climbing to my right and took that road to see how high I could get on Cottonwood Mountain. This Cottonwood Mountain Lookout Road was steep and rocky in spots and led up through canyons and across ridges. It seemed a bit too remote and uncertain a route for me, so I decided to return to Vale and gather some information from locals for a return another time. 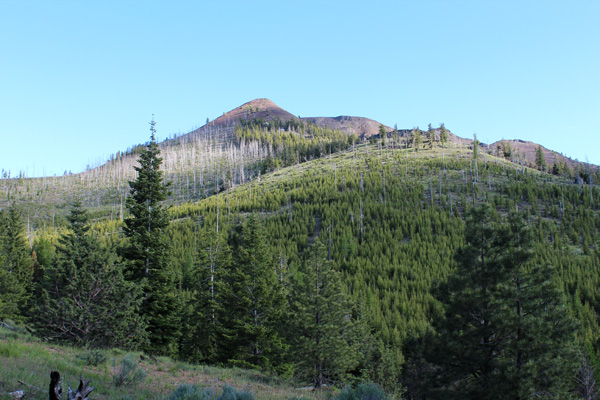 I left Vale and drove west on US 26 to find and follow forest roads high onto Ironside Mountain near Unity. Ironside Mountain is the 52nd most prominent peak in Oregon with 2211 feet of prominence and 7811 feet of elevation. The forest roads led me to a high saddle below the summit. I had to trim some small trees leaning across the road in one stretch and was glad to have good tires and 4WD to climb the last half mile to the saddle.

From the saddle the hike up the summit cone was off trail but boot tracks helped with the footing. The views from the summit were excellent, with the Strawberry Mountains to the west, Steens Mountain in the distant south, the Elkhorn and Wallowa Mountains to the north, and Cottonwood Mountain and Idaho beyond to the east, as well as many other peaks I have visited.

I drove most of the way out to US 26 that afternoon and camped at a decommissioned campground. It had been an interesting day. 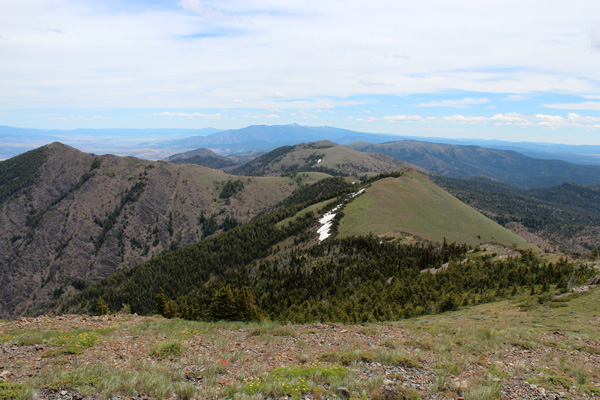 Moon, McClellan, and the Strawberry Mountains from Fields Peak.

On Monday, June 13, I hiked Fields Peak, the high point of the Aldrich Mountains. Fields Peak is the 42nd most prominent peak in Oregon with 2322 feet of prominence and 7362 feet of elevation. It lies south of US 26 between Dayville and Mt Vernon but is often hidden from views by lower peaks there.

I followed good directions to the McClellan Trailhead, then hiked a jeep road to a junction where I took the ATV track up to the summit of Fields Peak. Many wildflowers decorated the road/trail sides. A few firm snowbanks covered the trail high on the route but were easy to cross. The summit offered a nice view of the Strawberry Mountains to the east.

I returned to my Jeep and headed for home. It had been a fun week of exploring prominence peaks in Oregon’s Blue Mountains.

I had the good fortune to have spent most of my life in the Pacific Northwest, where I discovered the joys and addiction of hiking and climbing in the Cascade Mountains and other mountain ranges in the Western United States.
View all posts by Paul McClellan →
This entry was posted in Hiking and tagged Big Lookout Mountain, Cottonwood Mountain, Fields Peak, Ironside Mountain, Jarbidge Mountains, Mahogany Mountain, Nevada, Oregon, Pedro Mountain. Bookmark the permalink.