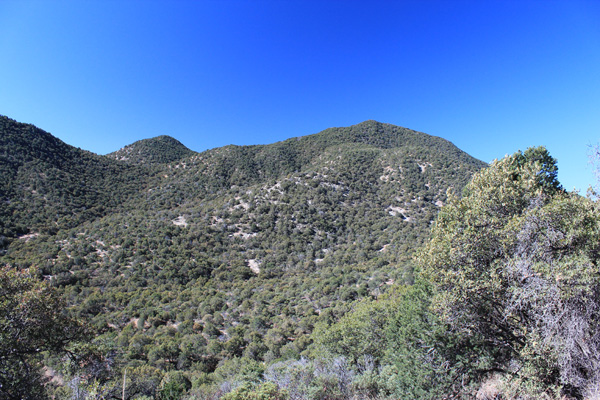 Veterans Peak appears high on the left from Forest Road 61

Tucson was predicted to be at record temperatures Wednesday. I met June, Bill, Jane, John, and Roxanna early in the morning. We drove south through Sonoita to the town of Patagonia. From there we followed forest roads south into the Patagonia Mountains. We parked at about 6000 feet elevation and climbed a steep unmaintained but obvious trail south towards Veterans Peak.

Most of the hike was in shaded forest with a cooling breeze. We hiked the trail up to the forested summit of Veterans Peak. We took a break beneath a communications tower and added our names to a summit register which contained many familiar names and some of our own from previous visits. 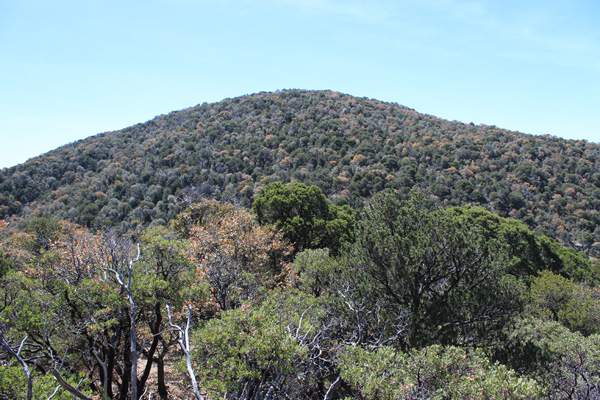 From Veterans Peak we descended south down a narrow ridge to a saddle, getting a brief glimpse of Mount Washington ahead of us through thick forest. As we climbed up the north slope of Mount Washington the trail became less distinct and harder to follow with many boot tracks leading in various directions. We eventually found the summit, added our names to the summit registry, and had an early lunch. 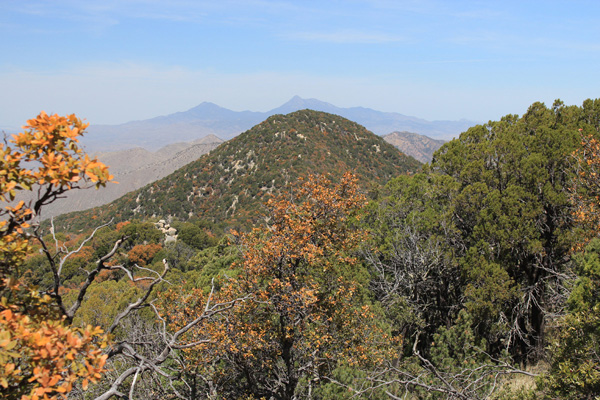 Our return route began by descending back north to the saddle between the peaks. An alternative trail allowed us to traverse below Veterans Peak to the east and thereby avoid climbing over that summit a second time. This traverse was more open without a breeze and we experienced the full warmth of the sun. Eventually we regained the trail we had followed earlier in the day and enjoyed the shade and cooling breeze again. 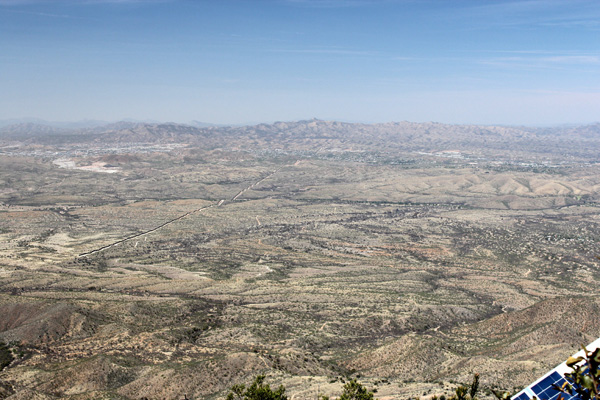 Looking west from Mount Washington. Nogales, Arizona and Sonora, lie below. The US/Mexico border wall is visible as well.

Bill led us in collecting and carrying out some of the trash along the route from Mount Washington out to the cars. We left the forest in better shape than how we found it.

A Border Patrol vehicle was parked between our cars on our return. Soon another Border Patrol vehicle drove up and we introduced ourselves to the two officers it contained. One of the officers said he had followed us up Veterans Peak in the morning and then took an alternative route down. He was surprised to hear we had continued south for Mount Washington from there.

The day provided us a pleasant hike through mountain forest and some respite from Tucson’s heat.

I had the good fortune to have spent most of my life in the Pacific Northwest, where I discovered the joys and addiction of hiking and climbing in the Cascade Mountains and other mountain ranges in the Western United States.
View all posts by Paul McClellan →
This entry was posted in Hiking and tagged Arizona, Mount Washington, Patagonia Mountains, SAHC, Veterans Peak. Bookmark the permalink.