Posted on February 6, 2018 by Paul McClellan

Last Saturday, February 3, I joined the Southern Arizona Hiking Club in the Sawtooth Mountains southwest of Arizona City. This is a small range of steep peaks, visible to the west from I-10 between Picacho and Casa Grande north of Tucson. 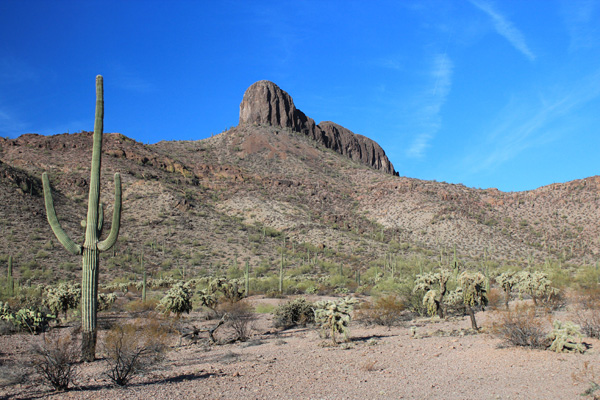 Peak 2614 from our parking spot. The route followed the cliffs around the right side.

Our goal was to climb two peaks, Peak 2614 and Peak 2630, both within the Ironwood Forest National Monument. Peak 2630 is the highpoint of the Sawtooth Mountains with 1020 feet of topographic prominence. We drove in on a dusty road and parked at an elevation of only 1740 feet, nearly 1200 feet lower than Linda’s and my home in Tucson.

Our climbing team first approached Peak 2614, appearing as a rock pillar rising above our parking spot. The approach trail was well marked with white paint on several rock cairns. At the base of the cliff in the opening of a shallow cave we found piles of trash: clothing, empty water jugs, and discarded cans and jars. This spot has apparently been used as a “smuggling hooch” by lookouts for either people or drug smuggling operations. 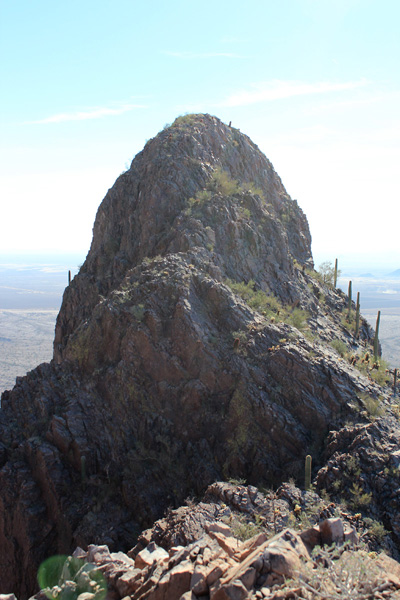 Following the base of the cliff we followed a route leading up a gully, then over some steeper rocks to the top of a ridge. We followed this towards the summit tower. On the way I saw three desert bighorn, two adults and a tiny lamb, climbing the route ahead up towards the summit. The rest of the climb was scrambling over firm rock to the summit. The bighorn avoided us and we saw them descending back down the route. 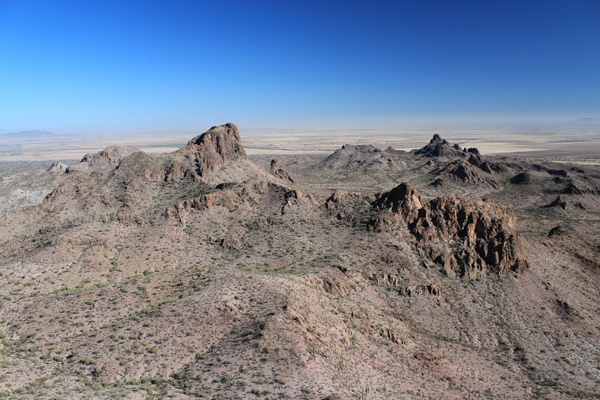 Looking north towards Peak 2630, the highpoint of the Sawtooth Mountains, from Peak 2614

The summit of Peak 2614 provided excellent views of the Sawtooth range and surrounding ranges. Peak 2630 rose to the north. After a break we descended off Peak 2614 to the desert slopes. We hiked across open country and up rocky slopes towards Peak 2630 to a notch below a tower. White arrows painted on the tower indicated a route leading up this tower. I scrambled up firm rock on good holds to check where the marked route led, but discovered it topped out on a false summit without access to the true summit. 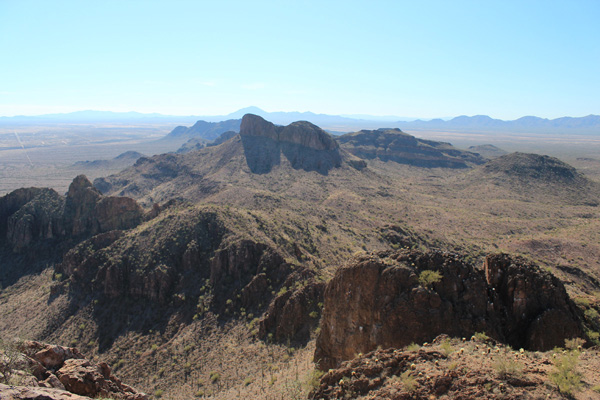 Looking south towards Peak 2614 from the summit of Peak 2630, the highpoint of the Sawtooth Mountains

I descended to the notch and we continued traversing the western slopes of Peak 2630. We followed gullies and open slopes up the west side and scrambled over rock to the summit where we relaxed and finished our lunches. 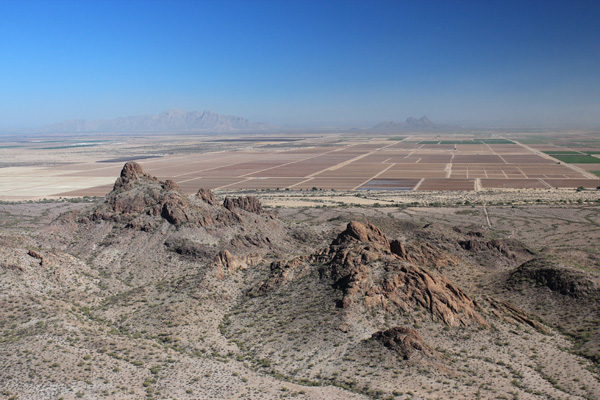 It was a sunny and warm day with a fun group of climbing companions. We have had an unusually dry winter and spring temperatures are arriving early this year. I may soon start carrying an extra liter of water on my hikes.

I had the good fortune to have spent most of my life in the Pacific Northwest, where I discovered the joys and addiction of hiking and climbing in the Cascade Mountains and other mountain ranges in the Western United States.
View all posts by Paul McClellan →
This entry was posted in Climbing, Hiking and tagged Arizona, SAHC, Sawtooth Mountains. Bookmark the permalink.