My peakbagging focus since late spring has been Oregon Prominence Peaks. I realized early in this hiking season that I had the opportunity to make very good progress on the list of Oregon’s 100 most Prominent Peaks. After earlier trips to the Siskiyou Mountains and Blue Mountains I identified four Southern Oregon prominence peaks as my next priority. I broke up the project into two trips. 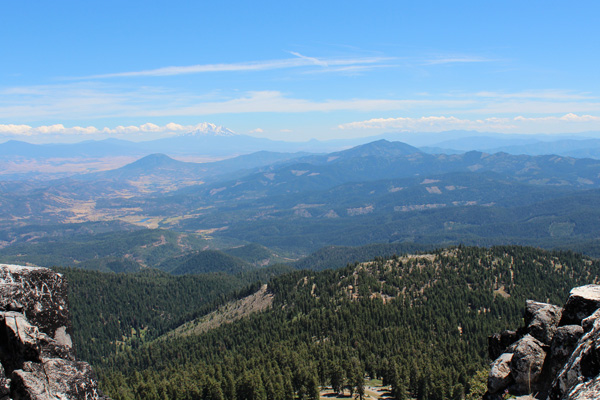 Mount Ashland is the 15th most prominent Oregon peak with 3131 feet of prominence. On July 5 I drove south to the Mount Ashland Ski Area by way of Lake of the Woods. From the Ski Area I followed forest road 20 west and parked in shade near the summit road. I hiked the summit road to the summit located just east of the top of the summit lift. This was a pleasant road hike in ideal weather. I especially enjoyed the views of Mount Shasta and other peaks to the south.

The descent was scenic. After refueling my Jeep in Ashland I followed Dead Indian Memorial Road northeast. Before reaching Lake of the Woods I turned north onto forest road 37 and stopped at Beaver Marsh Campground. This campground had only four sites but it was mine alone to enjoy for the evening and night.

Brown Mountain is the 68th most prominent Oregon Peak with 2058 feet of prominence. It is protected by trailless forest and basalt talus fields. I drove north to Oregon Highway 140, then turned east and looked for a good spot to park for my hike. Many peakbaggers start at the Summit Sno-Park, especially in winter when they can ski up the talus fields. Brown Mountain seemed quite distant from the Sno-Park so I decided to try an alternative starting point.

I drove further east on highway 140 then turned right at a sign for Camp McLoughlin. I took forest road 3640 to the right and climbed south through forest. After about three miles the road started to turn east away from Brown Mountain. Here I found a good parking spot along the road. 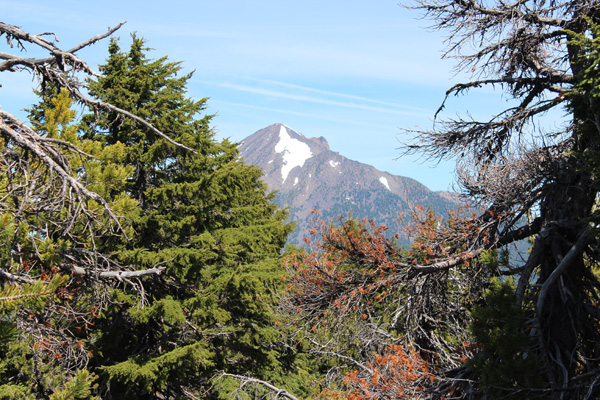 I entered the forest with compass and GPS. The forest was often brushy but I took advantage of many firm talus fields to avoid most of it. I combined a general compass bearing with a summit waypoint and reached the summit ridge without much trouble. Eventually I found what I thought to be the actual summit surrounded by trees and took summit photos as best I could. The descent was easier with the help of gravity and my GPS track. The previous February I had injured my left ankle descending Mount Ajo. After several months the ankle was feeling stronger but I was careful not to repeat falling and twisting my ankle descending Brown Mountain.

Bryant Mountain is Oregon’s 75th most prominent peak with 1981 feet of prominence. It is located east of Malin and is a popular ATV destination for locals. A gated road leads to the summit fire lookout. It was a pleasant road hike to the summit located on a grassy knoll near a lookout tower. 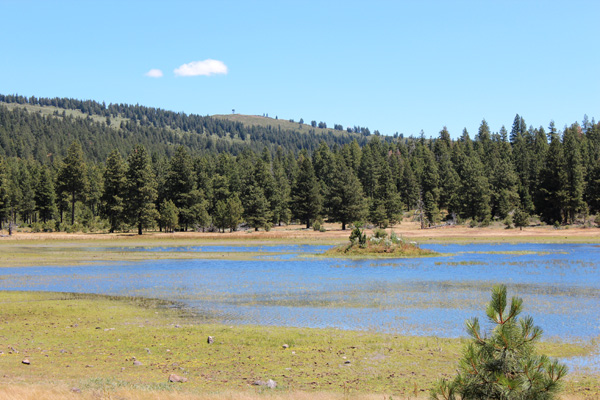 On July 12 I drove to Malin, southeast of Klamath Falls. From downtown Malin I drove to the locked gate guarding the summit road. I followed Dennis Poulin’s driving directions I had printed from summitpost.org which he has since deleted. As I drove I referenced my topo map at intersections and recorded my driving notes:

0.0 From the Malin Oregon Post Office follow highway 50 as it turns east.
2.9 Turn left onto a paved road marked by a sign “Bryant Mtn L.O.”. This is Loveness Road.
3.9 Continue on Loveness Road as it narrows and climbs a ridge to the east.
4.7 Turn left onto gravel Bryant Mountain Road (39-11E-26.0). This road is closed from November 1 to April 15 each year “To protect Deer Winter Range and Road Resources”.
4.9 Continue straight.
6.3 Pass under 2 power lines.
7.3 Continue straight and pass under 3 power lines.
7.7 Turn right onto a lesser road near MP 12.
8.5 Reach a locked gate. Park here at about 5420 feet elevation.

I climbed over the gate and followed the road north. The road passed the west and north sides of a small, shallow lake at elevation 5566. From the west side of this lake I could see the Bryant Mountain fire lookout and grassy summit to the southeast. The road continued past the north side of the lake, then turned to the southeast, forked left, and traversed up a ridge. Eventually the lookout tower came into view and the road led to the summit ridge just south of it.

The lookout tower was boarded up and unoccupied on my visit. Perhaps it has been several years since it was last used. The highest point of the summit ridge appeared to be south of the lookout tower at or near a picnic table and building foundation. There were good views in all directions.

After taking several photographs I returned to my Jeep, returned to Malin, then drove north towards my next destination, Fuego Mountain. I found a nice campsite off forest road 44 on the drive in towards the peak. This put me in good position for hiking Fuego Mountain the next day.

Fuego Mountain is the 80th most prominent Oregon Peak with 1941 feet of prominence. It is located east of Chiloquin in the Winema National Forest. The hike would start on a forest road that became quite overgrown with brush, then continue to the summit through forest and across a brushy ridge to a small and rocky summit. 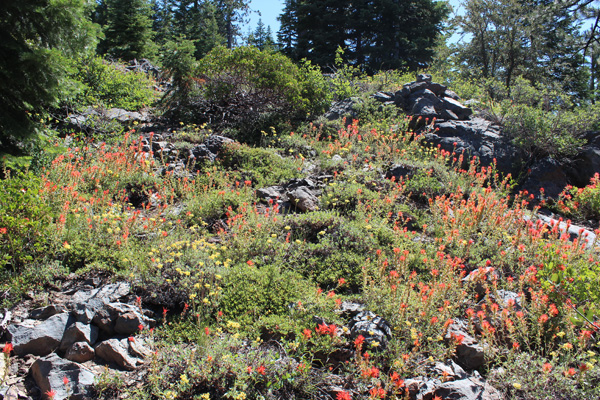 On the morning of July 13 I continued driving towards Fuego Mountain following Dennis Poulin’s driving directions I had printed from summitpost.org. I went as far as where Road 4450 suddenly deteriorated. There was a nice parking spot here so this is where I parked and began my hike up the road. 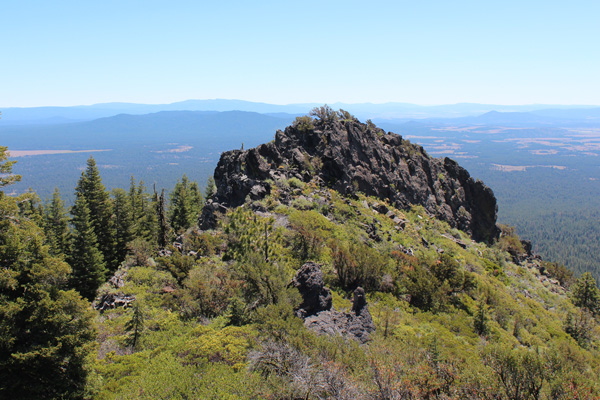 FSR 4450 became steep, deeply rutted, and narrow with brush and small trees encroaching on the sides. Higher I turned off FSR 4450 onto unmarked FSR 4450250. After turning to the left this road bed became dense with manzanita and other brush in one section. I tried climbing directly up the slope to my right but soon abandoned this idea and returned to the road, where it subsequently became easier to travel. At the 6545 Saddle I bushwacked up the Southwest Ridge to meet the South Ridge which I followed to the summit through forest, brush, and over some rock outcrops.

The summit is a narrow rock outcropping partially surrounded by small trees but has a nice view of the false summit and distant Gearhart Mountain to the east. On my descent I followed more open ground below the South Ridge on the east side to reach the southwest ridge. From there I retraced my ascent route back to my Jeep.

I had the good fortune to have spent most of my life in the Pacific Northwest, where I discovered the joys and addiction of hiking and climbing in the Cascade Mountains and other mountain ranges in the Western United States.
View all posts by Paul McClellan →
This entry was posted in Hiking and tagged Brown Mountain, Bryant Mountain, Fuego Mountain, Mount Ashland, Oregon. Bookmark the permalink.