In mid September I returned to Southeast Oregon with the intent to summit Beatys Butte after being turned back by a flat tire in early July and to hike several Steens Mountain summits after being turned back by wildfires in mid July. I had purchased new tires for my car and the wildfires near Frenchglen had died down, so I was hopeful my plans would succeed this time. 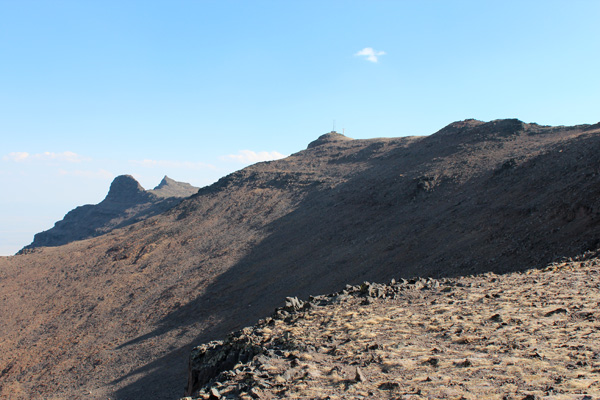 I began by driving to Frenchglen, then onto the Steens Mountain Loop Road. The sky was smoky from fires in the Cascades if not from others elsewhere as well. I scouted out Page Springs,  Fish Lake, and Jackman Park campgrounds for reference, then drove to the Kiger Gorge Overlook to see the summits lying on the ridge to my right between Kiger Gorge below and Mann Lake to the east. I then drove to the Wildhorse Lake Trailhead and hiked the 1/4 mile on a gated road to the Steens Mountain Summit.

The summit contained several antennas, a few small buildings, and many large propane tanks. Construction of a new structure was underway as well. I looked down on the Alvord Desert far below me to the east that I had last visited in 1984, and towards the Pueblo Mountains I had just visited earlier that summer. I returned to my car and drove to the nearby East Rim Overlook that I had last visited in July 1985. 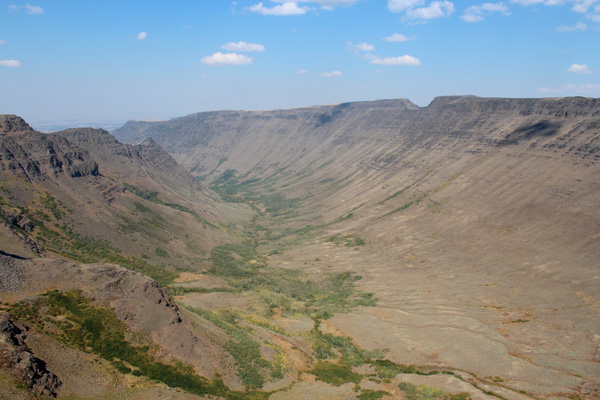 I finished the day by returning to the Kiger Gorge Overlook to spend the evening and night. I made dinner and relaxed, watching the sun set and cast shadows across the gorge and up the ridge to the east, then the stars come out in the clear night. I heard coyotes. 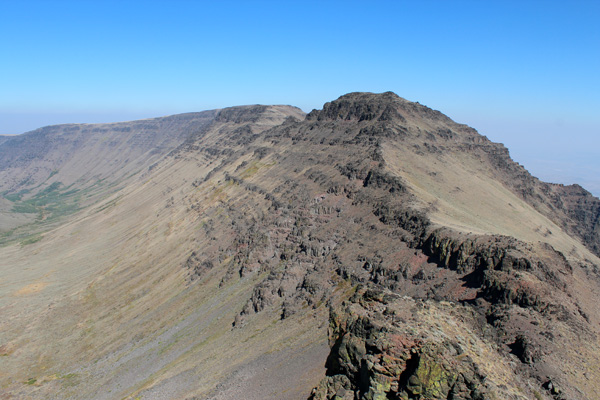 Kigermann (Steens Mountain North Peak) and Peak 9213 from the south

The next morning I left the car at the overlook and hiked east across the plateau to gain access to the ridge forming the eastern slopes of Kiger Gorge. I descended from the plateau to the ridge down an exposed class 2 ramp. The alternatives appeared to be class 3 and I reserved them for the return.

I scrambled and hiked the ridge north, staying on the ridge line or to the east, following game trails or boot tracks where they led where I wanted to go. On the way north I tagged “Peak 9213” which is just right of center in the above photo. I continued north, dropping into and climbing out of a broad saddle to reach a plateau after about 2 miles on the ridge. I hiked north across the plateau for about a mile to reach the Kigermann summit, a slight rise on the far northeast side of  the plateau, not far from the U-notch terminating the plateau on its north end. After a snack and photos I continued north to the edge of the U-notch for a look.

I returned the same route and selected a class 3 ascent route to regain the plateau leading back to my car. My hike took longer than I had expected, but I still wanted to complete the Steens Mountain Loop since it had been so many years since I had done so. I continued to Denio Junction, NV, by way of Fields and restocked ice and fuel, then headed west towards Beatys Butte on NV State Route 140/OR Route 140.

Since the evening was approaching I decided to leave OR Route 140 on a short primitive road leading to the Doherty Slide Hang Glider Launch Site to park and make camp.  This site is near the top of Guano Rim and overlooks Guano Valley to the west. It was another scenic site to spend the evening and night. I made dinner and relaxed, watching the sun set behind the Warner Mountains and cast shadows across the valley below. Later I watched car headlights creep across the Valley and climb up the rim. 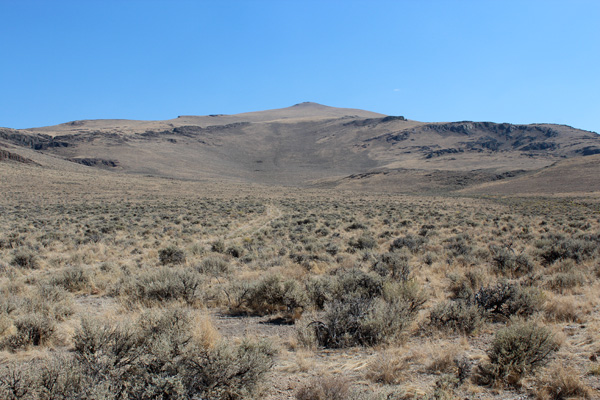 The next morning I returned to the highway, descended Doherty Slide, and immediately turned north on the Beatys Butte Road. After my early July experience I vowed this time to keep my speed below 20 mph to minimize the chance of another tire puncture. I mostly succeeded in restraining myself from “speeding” and after 27.5 miles I finally decided to park just beyond Twin Springs and start my hike up Beatys Butte.

I started by following a primitive road towards the butte, but that soon ended. I decided to traverse left of center in the above photo to reach the shallow rocky ridge line leading towards the summit. This seemed to avoid the thicker sagebrush I would have encountered had I taken a more direct route. The upper part of the route was an open slope. The sun was warm and the air calm.

The Beatys Butte summit registry showed more visitors than I had expected. The area is very popular with hunters and the butte apparently tempts many to hike up for a view. I returned to my car by the same route. I celebrated, then carefully drove out to the paved highway and returned home.

More photos are available on my Picasa Web Album.

I had the good fortune to have spent most of my life in the Pacific Northwest, where I discovered the joys and addiction of hiking and climbing in the Cascade Mountains and other mountain ranges in the Western United States.
View all posts by Paul McClellan →
This entry was posted in Climbing, Hiking and tagged Beatys Butte, Kigermann, Oregon, Steens Mountain. Bookmark the permalink.