On January 15-18 Linda and I camped at the White Tank Mountain Regional Park, located on the west side of the Phoenix metropolitan area. The campsites were spacious. Linda enjoyed gravel bike riding and hiking locally and I hiked prominence peaks west of Phoenix. 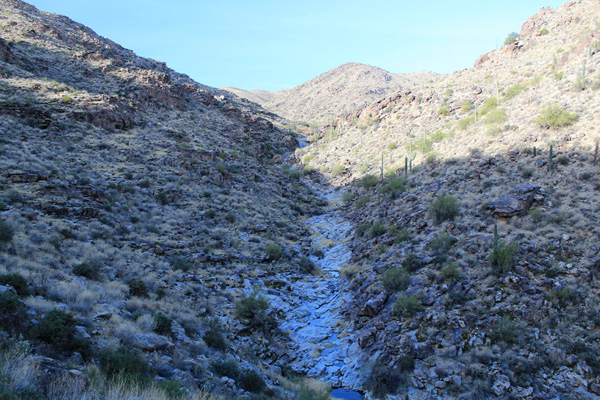 One of the white tanks below the Mesquite Canyon Trail

The White Tank Mountains consist of a series of numerous rocky fault ridges and deep canyons. During heavy rainfall water has scoured out a number of depressions or “tanks” in the white granite in canyons near the base of the mountains. These white tanks are the source of the name of this range. 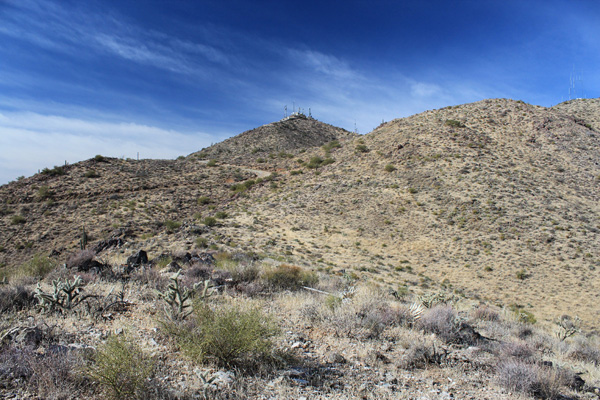 On our second day at the White Tank Mountain Regional Park I hiked up Barry Goldwater Peak, the highpoint of the White Tank Mountains. I started from Picnic Area 7 and hiked up the Mesquite Canyon and Goat Camp Trails to an old jeep track. I followed this jeep track to a utility road leading to the summit of Barry Goldwater Peak. Barry Goldwater Peak is the 37th most prominent peak in Arizona with 2503 feet of topographic prominence and 4083 feet of elevation. Due to the rugged nature of the range, the peak was not visible from our campsite. It was not until the last mile of my hike that I could see the summit.

This was a moderately long 13.4 mile hike but the grade was gradual and the footing was good on trail, track, and road. There were many other hikers on the trails, but once I left the developed tail system onto the jeep track I had the route to myself. 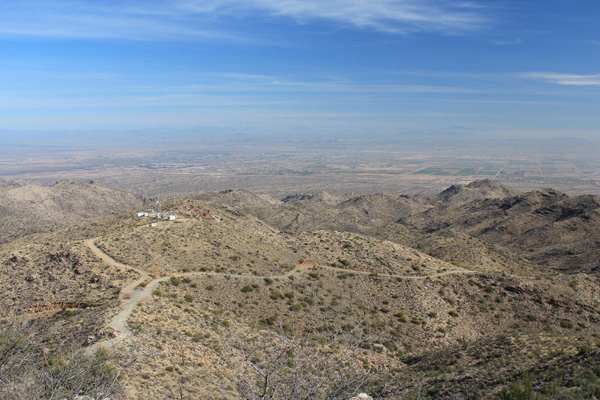 The view east from Barry Goldwater Peak across Phoenix

The summit was decorated with many communication towers and antennas and two workers were working in a building nearby. The weather was clear, but the “Valley of the Sun” had a lot of haze which obscured views of distant ranges and peaks. Still, I could identify several peaks to the east and south I have climbed in the past and the two peaks to the west I planned to climb over the next two days.

I descended the same route back and returned to our campsite to spend a late afternoon and evening with Linda and our three dogs. Linda had spent part of the day exploring trails on her gravel bike with only minor injury. A hot shower felt refreshing after a satisfying day on the trail. 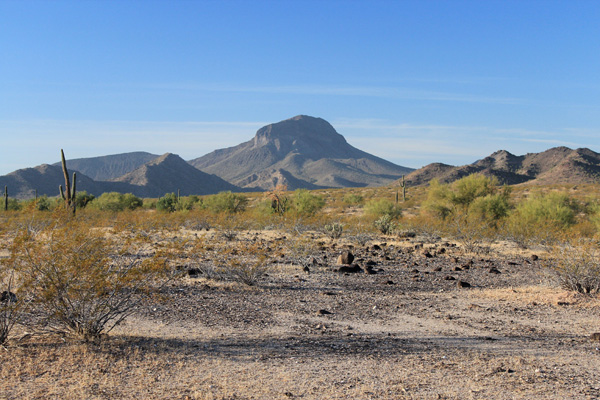 Woolsey Peak from the drive in

On our third day at the White Tank Mountain Regional Park I climbed Woolsey Peak, the highpoint of the Gila Bend Mountains. Woolsey Peak is the 63rd most prominent peak in Arizona with 2071 feet of topographic prominence and 3171 feet of elevation. It is an imposing landmark to the south as one drives past on I-10 west of Phoenix. 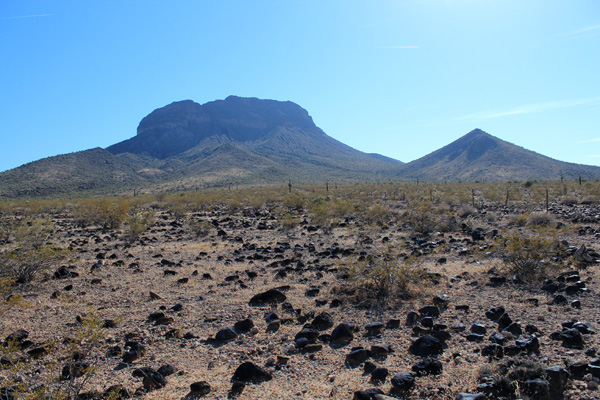 I left camp before sunrise. I drove west on I-10 south on AZ 85 past Buckeye, then followed Old US 80 to find the start of a 4WD, high-clearance road towards the north side of Woolsey Peak. My Jeep handled the rough drive in with ease, but eventually I was close enough to the peak and my drive speed was slow enough that I decided to stop and hike the remaining short distance to the end of the road. 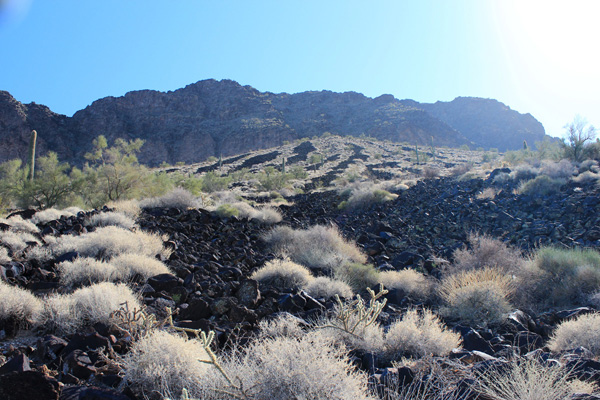 Looking up the bajada towards the steep upper north face 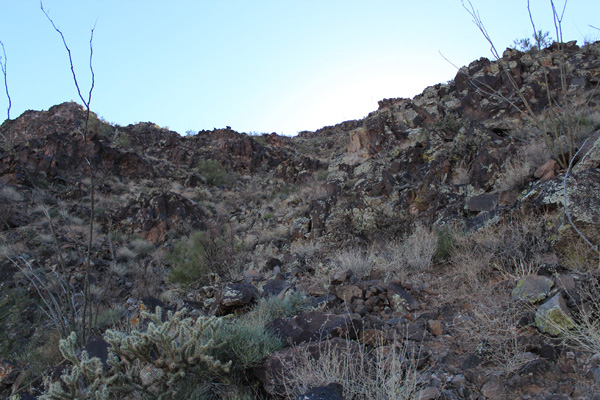 The upper north face of Woolsey Peak above the bajada

From there I hiked cross country, climbed under a fence, and climbed a steep, rocky bajada to the upper north face of Woolsey Peak. The last few hundred feet up the north face to the summit plateau was a fun scramble. 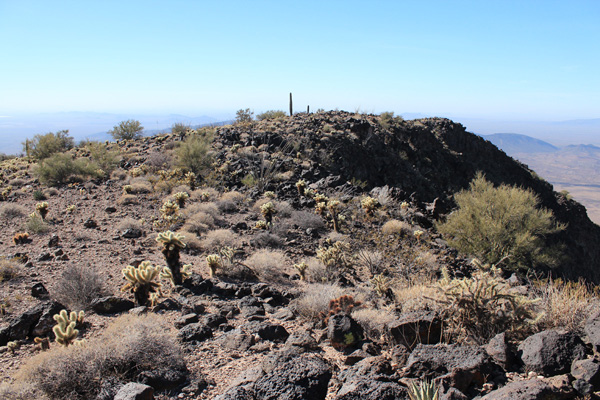 The Gila Peak Benchmark from the Woolsey Peak summit

The Gila Peak Benchmark is located a few feet west of the true summit of Woolsey Peak. I relaxed here first, eating lunch, taking photos and GPS readings, and trying to read the matted papers in the two “summit” registry containers. Eventually I found a spot on one page to write my name. After that I walked over to the true summit and found a quite recently placed summit registry jar and papers with few entries to which I added my own. 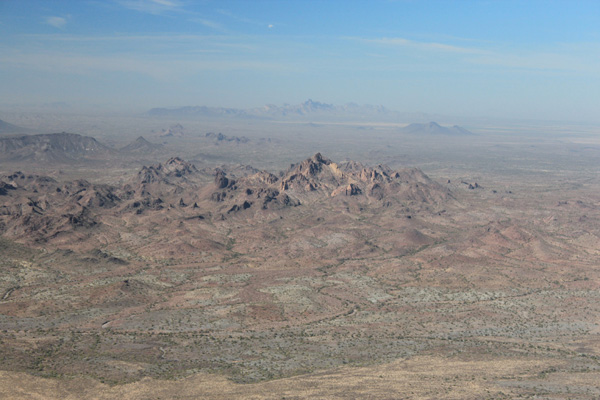 The views were better this day than the previous day on Barry Goldwater Peak. I was able to identify many of the surrounding peaks including my goal for the next day and peaks to the northwest I planned to visit next winter season. After lingering on the summit plateau decorated with many cholla and ocotillo, I began my descent back to my Jeep, visible far below. 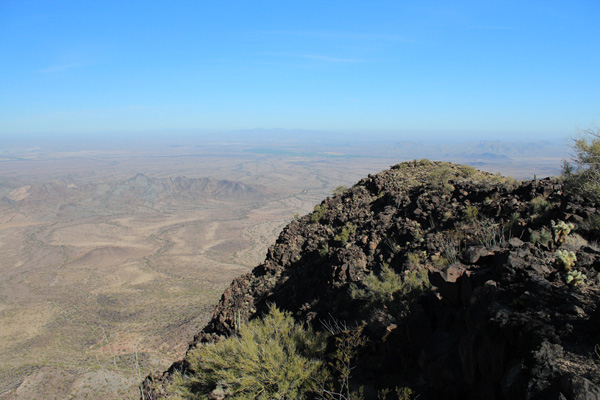 The descent went well. I was grateful that the basalt talus forming the steep bajada was firm. I carefully descended the bajada, stepping from block to block for several hundred feet, then relaxed as I hiked across gentle slopes back to the road. It was a very satisfying day and I was grateful for my health and the opportunity to explore these rugged peaks.

I returned to our campsite in late afternoon. Linda had spent the day exploring several trails on her gravel bike without mishap and in good spirits. After another relaxing late afternoon and evening I looked forward to one more day exploring Arizona’s prominence peaks. 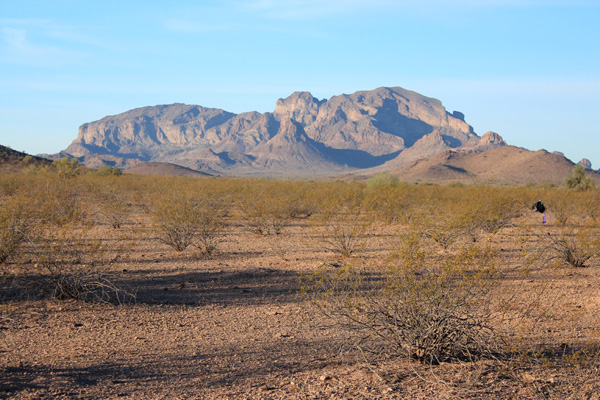 Saddle Mountain in morning light from the Salome Highway

On our fourth day at the White Tank Mountain Regional Park I climbed Saddle Mountain, southwest of Tonopah, Arizona. Saddle Mountain is the 97th most prominent peak in Arizona with 1777 feet of topographic prominence and 3037 feet of elevation. It is an impressive peak to the south as one drives past on I-10 west of Phoenix. 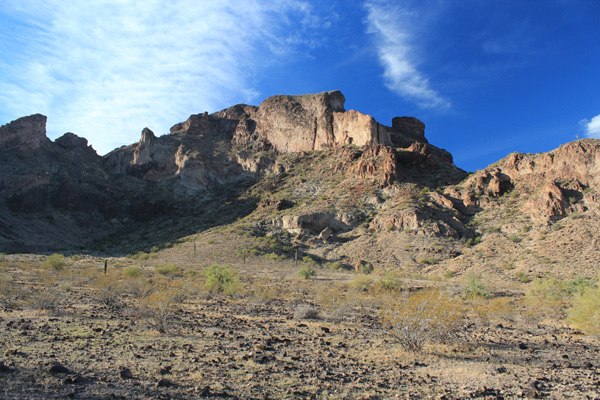 The north face of Saddle Mountain from the climbers trail

I left camp again before sunrise. I drove west on I-10 to Tonopah, then followed roads south and west, admiring the views of Saddle Mountain. A short gravel road leads to the trailhead just below the high cliffs forming Saddle Mountain’s north face. 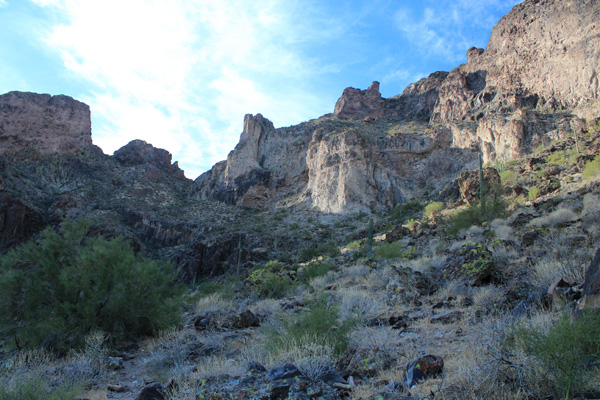 From the trailhead I dropped into a wash and followed a trail leading east. After some backtracking I eventually identified a faint climbers trail leading south towards the nearby cliffs rising high above me. This trail soon became much better defined and led to a notch high on the east side of Saddle Mountain. 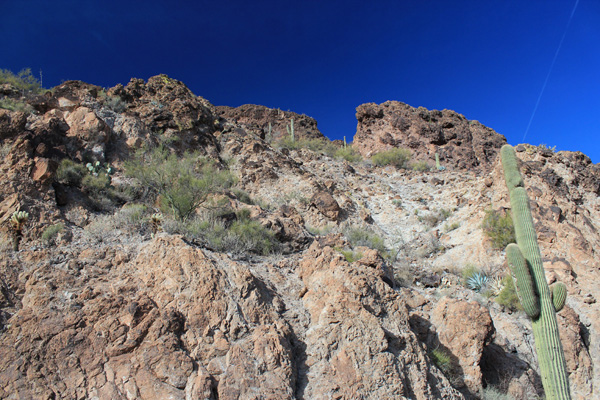 The upper east face from the notch

From the notch the route led up steep slopes requiring some careful scrambling to easier summit slopes and a scenic summit. 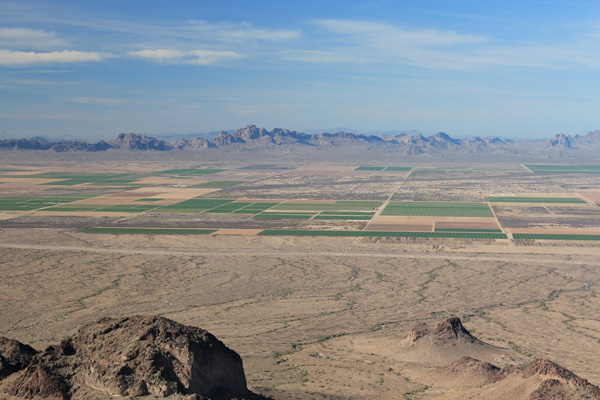 It had been a short but fun hike and scramble. The air was clearer than it had been the previous two days. I could better view nearby peaks and mountain ranges and even identify Signal Peak and Castle Dome Peak far to the west in the Kofa National Wildlife Refuge. Nearby to the west were the Eagletail Mountains I hope to visit someday. 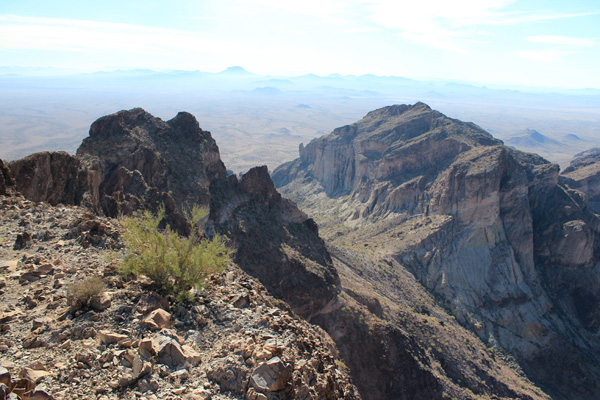 Woolsey Peak from the summit of Saddle Mountain

I identified Woolsey Peak to the southeast and carefully peeked over the high cliff to the southwest. 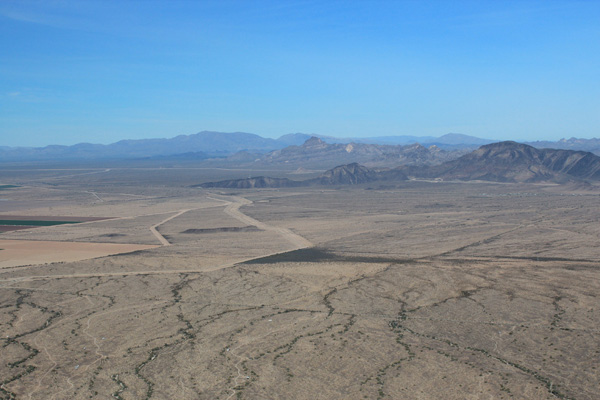 Looking northwest towards the Harquahala and Harcuvar Mountains in the distance, with Big Horn Peak and Burnt Mountain nearby

I had plenty of time to take photos and read the many summit registry entries. I relaxed over an early lunch and savored the pleasant summit experience. 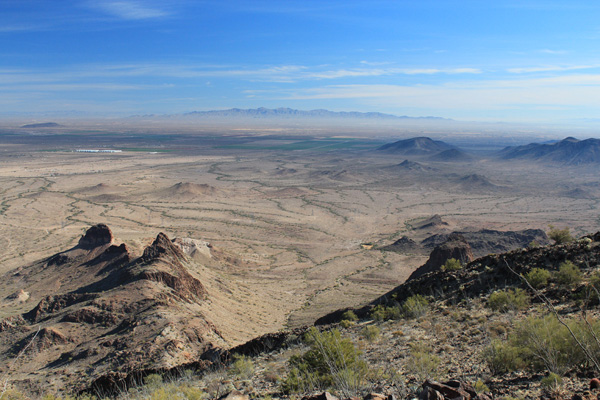 Eventually I thanked Saddle Mountain for my visit and began my descent. The descent of the steep slopes was uneventful and the trail soon led me back to my Jeep. It was yet another very satisfying day and I was again grateful for my health and the opportunity to explore the rugged peaks of Southern Arizona.

We returned to our Tucson home the next day. We have plans to visit the Superstitions next month and the Chiricahuas in March. I have provided Linda with emergency rolls of duct tape for her hiking gear.

I had the good fortune to have spent most of my life in the Pacific Northwest, where I discovered the joys and addiction of hiking and climbing in the Cascade Mountains and other mountain ranges in the Western United States.
View all posts by Paul McClellan →
This entry was posted in Climbing, Family, Hiking and tagged Arizona, Barry Goldwater Peak, Gila River Mountains, Saddle Mountain, White Tank Mountains, Woolsey Peak. Bookmark the permalink.