It had been two years since Linda, Doug Parrow, and I last rode a self-supported “loaded bicycle tour” together. These bicycle tours involve loading a touring bicycle with panniers and possibly extra bags and riding a route without auxiliary car support. That tour started in West Glacier, Montana, and led up and over Going to the Sun Road across Glacier National Park, up to Waterton Lakes National Park, and back.

This time we decided to try again a route that we had been turned back on in July 2006 – a loop around Mount Hood starting and ending from Keizer, Oregon. For many years this route had been a staple of the Salem Bicycle Club and had evolved over the years as the club gained experience with alternative routes around the mountain. Doug had led many of these tours and knew the route and its options well. In 2006 we had surrendered to temperatures in triple digits in the Columbia Gorge with the prospect of hotter temperatures ahead on the east side of the Cascades. The temperatures were forecast to be twenty degrees cooler this time. 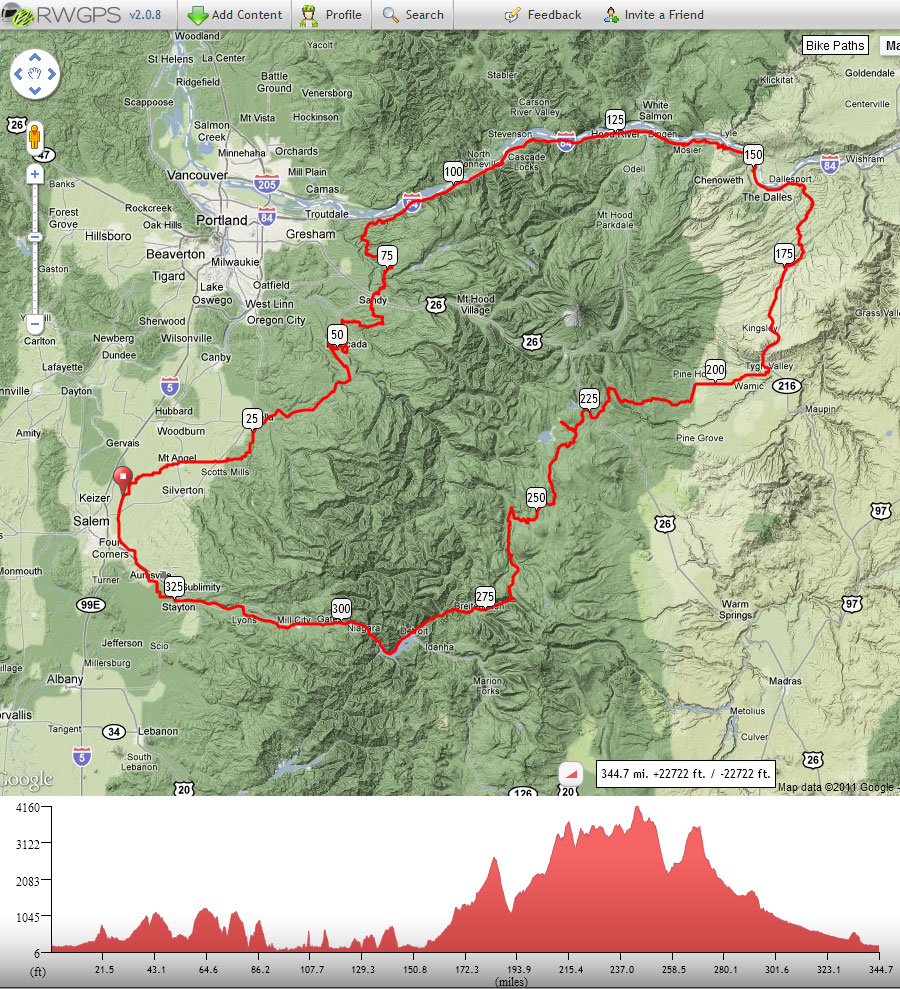 Wednesday (July 6), 55.3 miles. Linda, Doug, and I start at Doug and Jackie’s home and ride to meet two others who are joining us this year – Mel Lucas and Alex Phillips. Our ride starts on many country roads familiar to Linda and I from our years bicycling with the club when we lived in Salem. Beyond Mount Angel we have one steep ridge to climb and descend to reach Molalla where we have lunch. After lunch we ride Oregon 211 with heavy traffic and sometimes narrow shoulders up and over two summits to finish the day with a descent into Milo McIver State Park, near Estacada, where Doug has reserved a nice campsite for us. We set up our tents, shower at the park shower, wash and hang our bike clothes to dry, recharge our GPS units and mobile phones with electrical power at the site, and cook our dinner in camp. 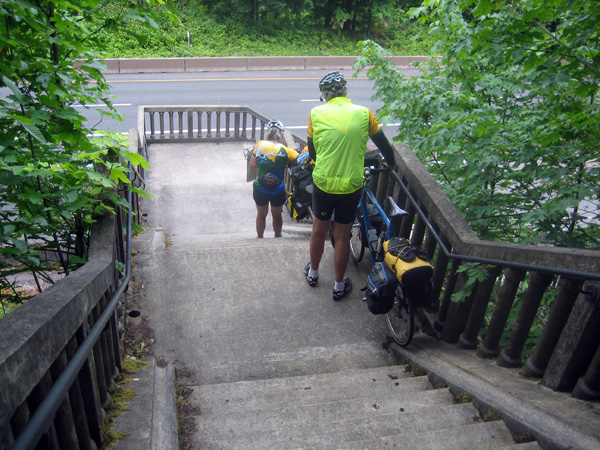 Thursday (July 7), 65.3 miles. We have a light breakfast in camp, then ride along the Clackamas River on a dirt and gravel road to Estacada where we have a second breakfast at the Harmony Baking Company, a bakery/cafe Alex had discovered on an earlier visit. We leave Estacada and climb over one ridge to reach Sandy where we stop for a latte break. After Sandy the ridge crossings get steeper and our progress slows. Eventually, we reach the Old Columbia River Highway and turn east. We make a short stop at Crown Point, then continue east to Multnomah Falls for a late lunch and then on to Cascade Locks, enjoying the good pavement and views of several waterfalls on the way. Part of the way is on forested bike trails and at one point we need to carefully descend steep concrete steps with our heavy bikes.  We finally reach our day’s destination – the Cascade Locks KOA – where Linda has reserved a campsite. Alex has dinner in camp, but after doing our camp chores the rest of us ride back to town about 2 miles for dinner and to pick up a few items for a light breakfast in camp. 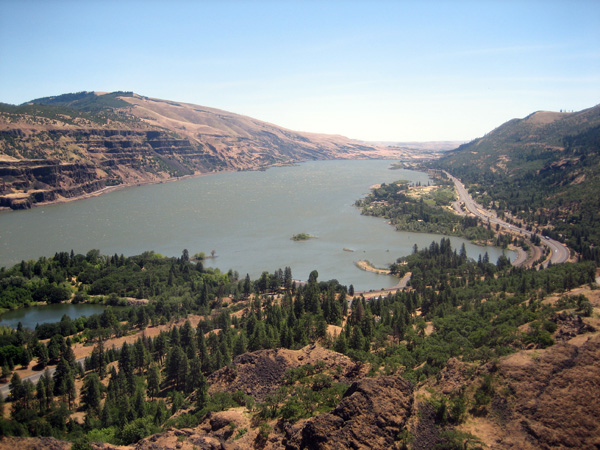 Friday (July 8), 65.5 miles. After a light breakfast in camp we ride east, crossing a steep ridge on Herman Creek Road and riding 11 miles on I-84 to reach Hood River. We have a second breakfast at Bette’s Place and stop at Mountain View Cycle & Fitness for Linda to replace her broken bike computer and for others to pick up miscellaneous items. We leave Hood River on Old Columbia River Drive and ride the Historic Columbia River Highway State Trail (hike/bike path) through the Mosier Tunnel to reach Mosier. From Mosier we follow US 30 to The Dalles with a stop at the Rowena Crest Viewpoint before the steep drop down the east side. We stock up with bike and camp food in The Dalles, since we need to have adequate food with us to get from Dufur to Detroit Lake in two days. After lunch at Big Jim’s we climb 15 Mile and 8 Mile roads to intersect Oregon 197, climb one hill on OR 197, then turn left and follow Boyd Loop Road to Dufur. We camp at the Dufur City Park. After camp chores we walk to the Dufur Pastime Saloon and Restaurant for dinner. 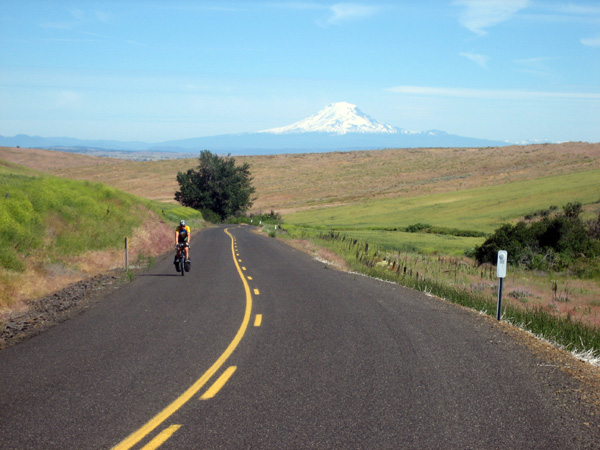 Saturday (July 9), 58.8 miles. My bike’s front tire is nearly flat this morning. I debate whether to just pump the tire up and see how it handles the road, but think better of it and carefully inspect the tread. I soon find a very slow leak, remove the tire, and find a small piece of wire has punctured the tire and tube. I remove the wire, replace the tube, and pump up the tire. It seems to hold the pressure fine. This proves to be the only puncture I get on the tour.

After a breakfast sandwich and coffee at Kramer’s we leave Dufur to begin what we expected to be and was our hardest day on the tour. We start by climbing 1300 feet up Tygh Ridge on Dufur Gap Road, then join OR 197 and take a long descent to Tygh Valley. We turn onto Wamic Market Road and climb to Wamic, then continue climbing Rock Creek and White River Roads and NFSR 48. Road 48 had very wide road cracks and my tent bounces enough to cause my taillight to contact my rear tire and get swept under my seat where it shattered on contact with my break calipers. I pick up the pieces and continue. 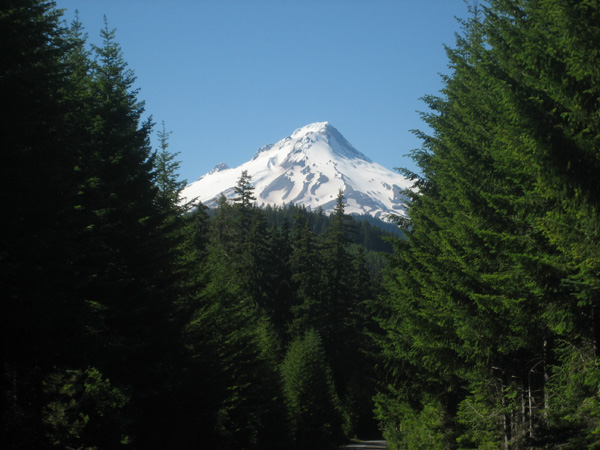 We stop off the road in the shade for a lunch, then continue the long climb to a summit on Road 48. I take a break to let the others catch up before dropping down to the White River on NFSR 43. We filter water from the river to fill our water bottles, then climb Road 43 to US 26. After riding about 2 miles west on US 26 we turn south on Oregon Skyline Road NFSR 42 for 3 miles, then descend 2 miles down an access road to Little Crater Lake Campground and the site Doug had reserved for us. It is getting late and there are lots of mosquitoes so we set up our tents, find the water pump, have dinner, and go to bed. 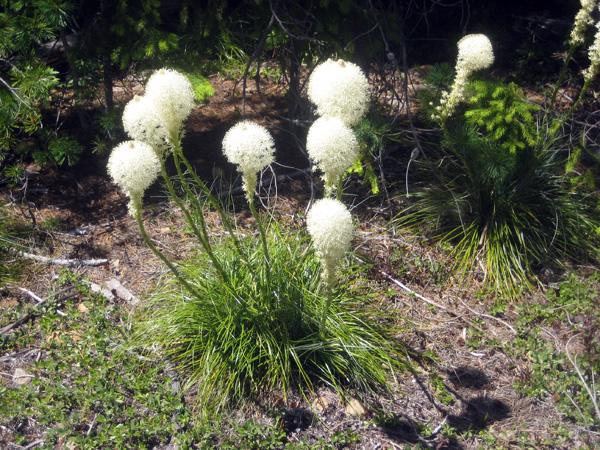 Bear grass in bloom along NFSR 46

Sunday (July 10), 57.7 miles. After a breakfast with mosquitoes we pack up, climb back to Oregon Skyline Road, NFSR 42, and turn south. We gradually climb on Road 42 to a summit, then steeply drop 1300 feet to NFSR 46 and the Clackamas River. From here we know we have one last climb before the descent to Detroit Lake. We take a break at the last summit, then begin our descent, leaving the Mount Hood National Forest and entering the Willamette National Forest. It is a fun descent to Detroit along the Breitenbush River, and after picking up some camp food we ride on to Detroit Lake State Park and our site that Doug had reserved. We enjoy the showers after missing them the previous evening. Doug and Alex ride back to Detroit for dinner, but Linda, Mel, and I eat dinner in camp.

Monday (July 11), 61.4 miles. We have a light breakfast in camp, then break camp and ride to Mill City for a second breakfast at the Mountain Edge Cafe, stopping in Gates for lattes on the way. From here we follow familiar old highways and back roads through Mill City, Lyons, Mehema, Stayton, and Aumsville where Mel parts company with us. We continue on familiar roads to Salem, where Alex leaves us, and finally back to Doug’s home in Keizer. Linda and I pack our gear and bikes and head for home, arriving at the dog kennel with 2 minutes to spare to pick up our dogs, Joey and Chico, before the kennel closes for the day.

This tour took me on some roads I had never traveled on before. Even familiar roads take on a sense of adventure when traveling and camping along them on a loaded bicycle. I vow to find ways to reduce the weight of my equipment, but pushing a loaded bicycle up steep hills for days has been great exercise. We don’t have another loaded bicycle tour scheduled this year, but I expect we won’t wait two years before doing another one.

I had the good fortune to have spent most of my life in the Pacific Northwest, where I discovered the joys and addiction of hiking and climbing in the Cascade Range and other mountain ranges in the Western United States.
View all posts by Paul McClellan →
This entry was posted in Bicycling and tagged loaded bicyle touring, Mount Hood. Bookmark the permalink.