On February 17-19 I hiked three Southwestern Arizona peaks with old and new peakbagging friends. These peaks are located south of I-8 east of Yuma in the Barry M. Goldwater Range (BMGR) West, a military bombing range, and the Cabeza Prieta National Wildlife Refuge (CPNWR). This was my first time in this region of Arizona and I enjoyed exploring these steep and rugged peaks. 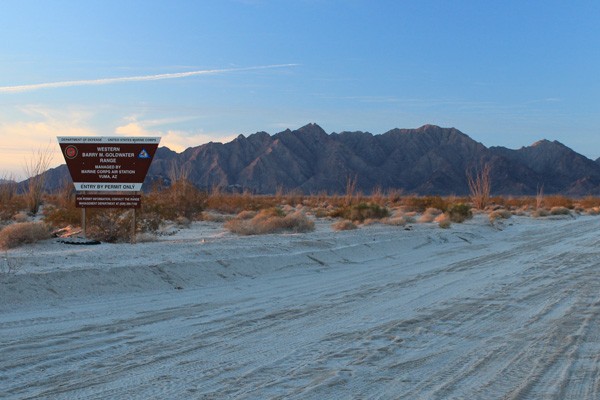 Sheep Mountain from the BMGR entrance

Friday evening, February 16, I camped just north of the BMGR south of Wellton, Arizona. I enjoyed the clear, dark, and starry sky above my solitary campsite. Over that night Eric Kassan arrived from Las Vegas, Adam Humphreys arrived from Phoenix, and Keith Christensen, Greg Gerlach, and Laura Newman arrived from Los Angeles. We had all obtained permits to travel through the BMGR and the CPNWR to climb three prominence peaks over the next three days. I had climbed with Eric and Adam in the past but this was the first time I was to meet Keith, Greg, and Laura. They had just climbed a peak on Friday and I was to learn that they are very active peakbaggers and enjoyable companions in the mountains. 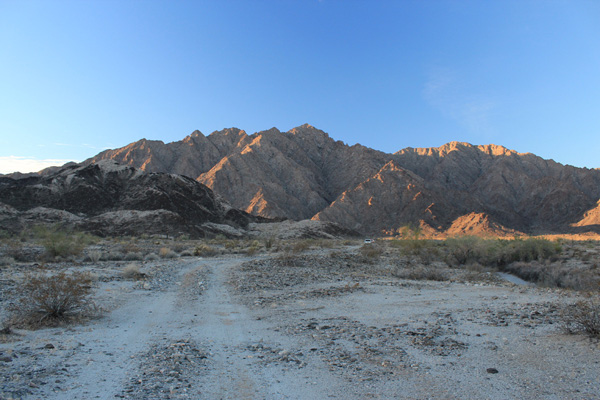 The north side of Sheep Mountain from the drive in

Our goal for Saturday was to climb Sheep Mountain, the highpoint of the Gila Mountains of Yuma County. Sheep Mountain is the 49th most prominent peak in Arizona with 2326 feet of topographic prominence and 3156 feet of elevation. We broke camp and drove south into the BMGR on good dirt roads to our parking spot below the north face of Sheep Mountain. 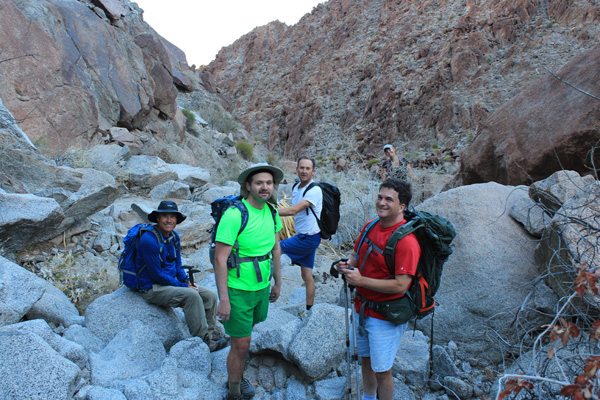 Our team in the north canyon of Sheep Mountain 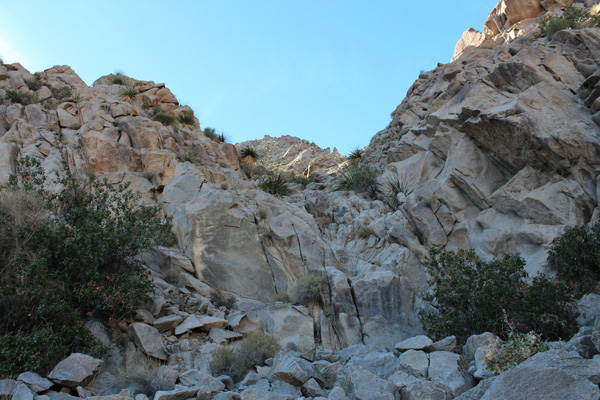 A dry waterfall high in the north canyon

We left our vehicles and hiked across open country to the mouth of a narrow canyon on the north side of the peak. The sides of the canyon are steep and rocky. We followed the rocky wash upwards in shade from the warm morning sun. The climbing up the wash was fun but time consuming, as we worked our way over the large rocks and boulders filling the wash. Eventually we climbed the canyon headwall to the north ridge of the peak and followed it to the summit. 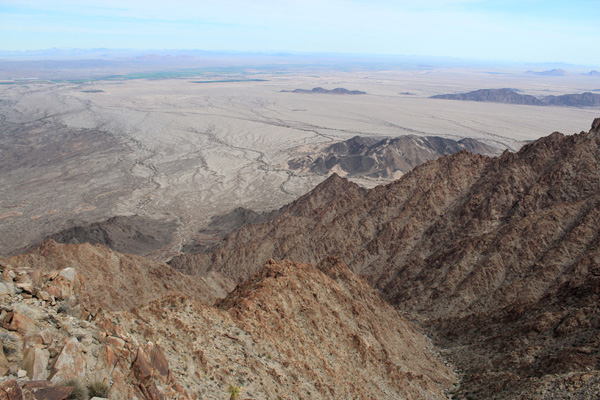 We relaxed on the summit, entering our names in the summit registry, taking photos, and enjoying lunch. The weather was calm and clear. I identified Castle Dome Peak in the distance to the north that Eric, Stacey, Adam, and I climbed last November. To the east and south I thought I recognized the two ranges we planned to visit over the next two days. 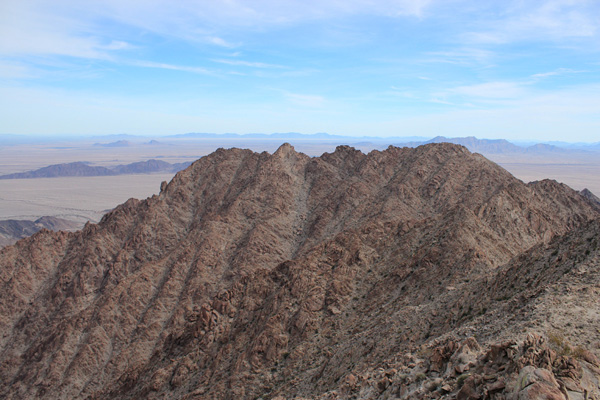 We descended the same route to our vehicles, taking about as long to descend over the rocky slopes and wash as it had taken to ascend the route in the morning. I saw no other people on the mountain. Once we returned to our vehicles we drove out to Wellton for restocking supplies and fuel. From there we drove east on I-8 to find and follow a dirt road 33 miles south through the BMGR and into the CPNWR to our campsite west of the Sierra Pinta beside a rescue beacon. The sunset along the drive was beautiful. We celebrated our success earlier that day of climbing Sheep Mountain in the Gila Mountains south of Wellton, AZ, but were expecting a very long day Sunday attempting Pinta Benchmark, the highpoint of the Sierra Pinta. 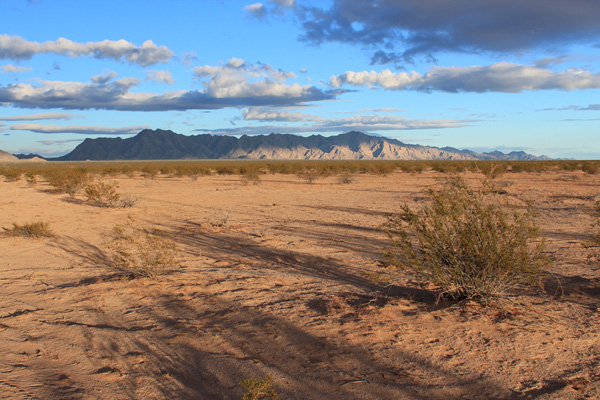 The southern Sierra Pinta with Pinta Benchmark on the right, from our camp

Pinta Benchmark is the 71st most prominent peak in Arizona with 2010 feet of topographic prominence and 2950 feet of elevation. The climb itself is not difficult – about 4 miles and 1900 feet of gain round trip base to base – but does require careful scrambling up a rocky canyon wash and slopes. However, although a good dirt road leads 8 miles from the rescue beacon to the peak that road is off limits except for authorized vehicles. 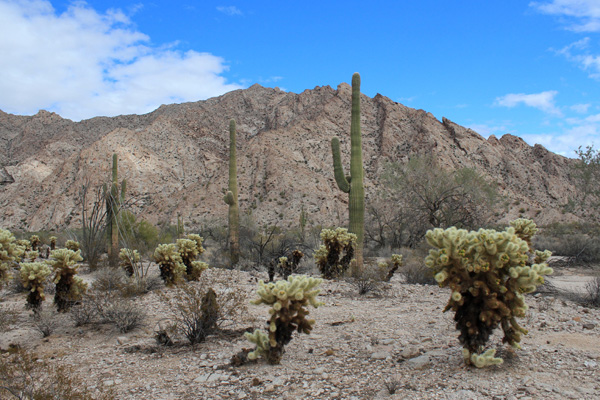 West face of Pinta Benchmark from the approach road

Eric and I began hiking the road Sunday morning by headlamp about 5AM. The others left soon thereafter and we all regrouped at the end of the road below the west face of the mountain three hours later. We entered a west-facing canyon and started following the rocky canyon wash upwards in shade. We found it easier to traverse the slopes to the right of the wash to avoid cliffs and dry waterfalls but eventually traversed back into the wash higher in the canyon.

The route forked at this point. Slopes to the left seemed to lead directly towards the north ridge and the possibility of low-angle ridge traverse to the summit. I started for that and Eric and Adam generally did the same. Keith, Greg, and Laura decided to continue up the canyon to the right. We soon lost contact with each other. 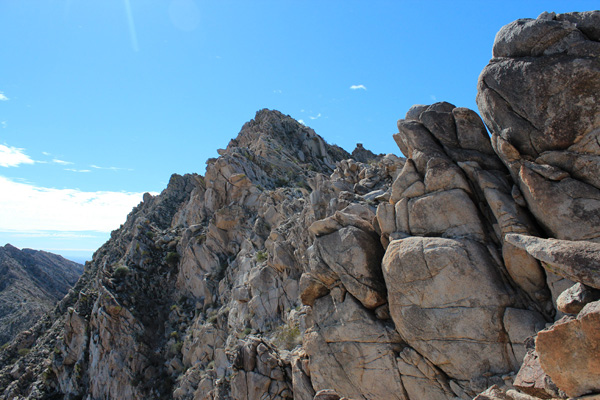 The Pinta Benchmark summit from the north ridge

As I climbed the slopes towards the ridge the ridge seemed to keep retreating upwards. On the way Adam and I discovered some unexploded ordinance (gun rounds of some large caliber) but left them in place. The summit came into view to our right as we climbed. Eventually we reached the north ridge. I peeked over the east side to discovered cliffs below a difficult ridge line. Fortunately the west side of the ridge offered an easier route and we traversed towards the summit below the ridge line. Keith, Greg, and Laura made better time on their route and beat us to the summit. I vowed to take their route down. 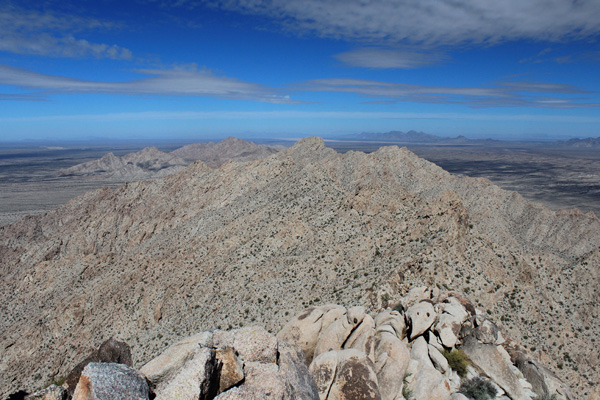 We found a metal can, but unfortunately no summit registry within. Eric provided a fresh notepad and plastic jar so we started a new summit registry. I never think to carry such items. We rested on the summit, had lunch, and took our photos. The Sierra Pinta stretched to the NW and SE below us. Many other mountain ranges rose in the near and far distance, including Cerro del Pinacate across the border in Mexico. We could see Mohawk Peak and the Mohawk Mountains to the north, our goal for the next day. It was tempting to linger, but we soon had to start out descent if we were to return to camp before dark. 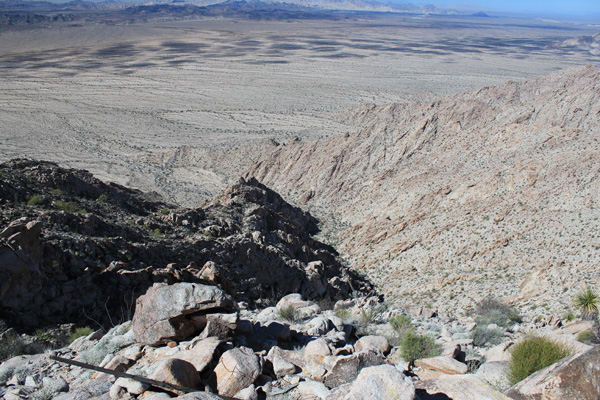 Looking west down our ascent route from the Pinta Benchmark summit

We descended directly down the canyon, traversing the slopes on the left low in the canyon as we had on the ascent. We returned to the base of the mountain, rested for a short while, then hiked the 8 miles back to our camp on the dirt road. I saw no other person between our leaving camp and returning 12 hours later. A Border Patrol officer checked in on us at camp soon after our return. She had found our footprints on the road we hike earlier in the day. We all decided to relax and spend one more evening and night at that remote campsite. The trip already qualified as a success and we had one more peak to try. 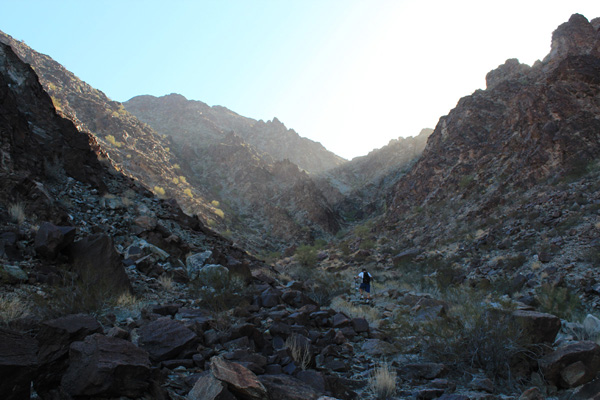 Keith leading the way up the canyon in the morning shade

Monday morning we left our camp and drove north out of the CPNWR, then east and north on dirt roads within the BMGR. Eventually we left the dirt road and drove across the desert to a canyon opening below the northwest face of Mohawk Peak. Mohawk Peak is the highpoint of the Mohawk Mountains. It lies southeast of Tacna, Arizona, It is the 56th most prominent peak in Arizona with 2140 feet of topographic prominence and 2775 feet of elevation. This was our third and final prominence peak on this trip for Eric, Adam, and I. Keith, Greg, and Laura had climbed a prominence peak in California the day before meeting us, so this was their fourth peak in as many days. 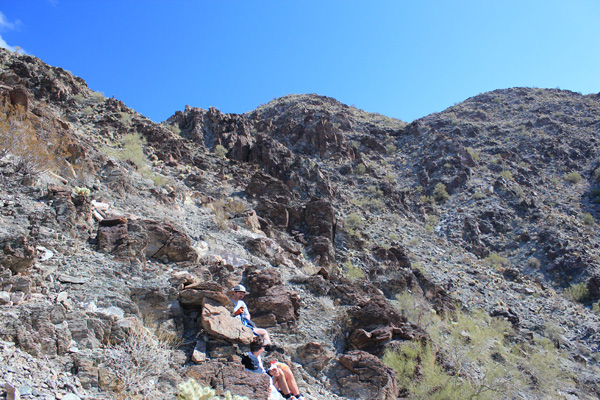 We left our vehicles and hiked towards the canyon facing us. We found an efficient route up the rocky canyon wash for several hundred feet on generally solid and stable rock. As we climbed the canyon the rock became more fragmented and loose. At one point we climbed a steep and loose face we hoped to avoid on the descent. We eventually reached a saddle above us and saw the summit for the first time since entering the canyon up to our right. It was breezy once out of the canyon. After a break we traversed up to the windy north ridge and followed it on more fragmented and loose rock to the summit. 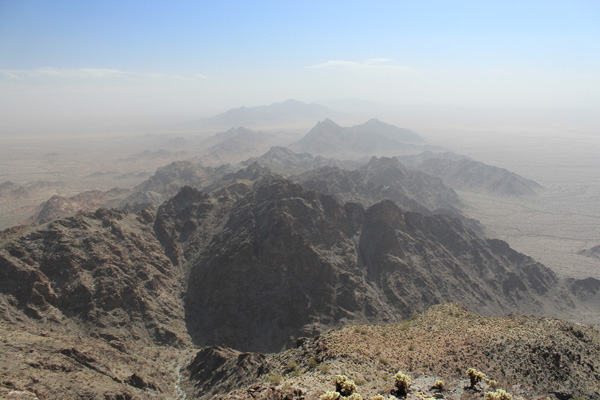 We relaxed on the summit, added our names to the summit register, and took our photos. The wind gradually got stronger and the valleys below us became more filled with blowing dust. Unfortunately, the blowing dust made it impossible to make out mountain ranges around us. Before long, we were eager to descend and begin our travels home. 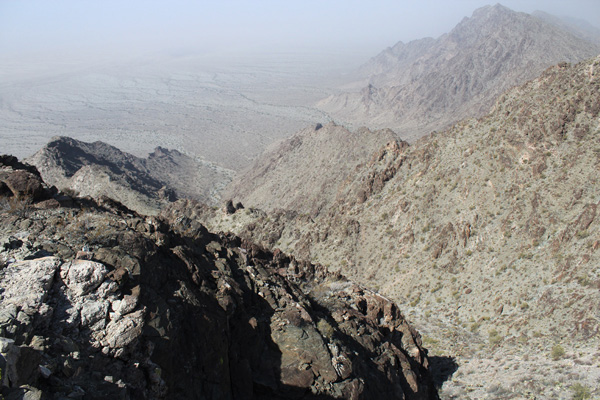 We descended the same route avoiding that steep and loose face we disliked on the climb. I slipped once and collected some cholla segments. The blowing dust became more pronounced as we descended towards our cars. I often blinked behind my sunglasses to wash dust out of my contact lenses. I slowed down to avoid stumbling over rocks.

We eventually reached our cars, packed up, and began our drive across the desert. After some wrong turns we found a route back to the dirt road, then slowly drove this road for several miles back to a gated fence beside I-8. We said our goodbyes and headed our own directions home.

I enjoyed exploring the mountains across the Barry M. Goldwater Range and the Cabeza Prieta National Wildlife Refuge on this visit. I have other candidate peaks to visit another time, perhaps next winter season.

I had the good fortune to have spent most of my life in the Pacific Northwest, where I discovered the joys and addiction of hiking and climbing in the Cascade Mountains and other mountain ranges in the Western United States.
View all posts by Paul McClellan →
This entry was posted in Climbing, Hiking and tagged Arizona, Barry M. Goldwater Range, Cabeza Prieta National Wildlife Refuge, Gila Mountains, Mohawk Mountains, Mohawk Peak, Pinta Benchmark, Sheep Mountain, Sierra Pinta. Bookmark the permalink.