Posted on December 8, 2017 by Paul McClellan

On November 25-27 I hiked three Western Arizona peaks. The first two, Signal Peak and Castle Dome Peak, are located in the Kofa National Wildlife Refuge between Yuma and Quartzsite. I hiked these with old and new Arizona peakbagging friends. On the last day I hiked Cunningham Mountain, located just southwest of Quartzite. This was my first time in this region of Arizona and I enjoyed exploring these peaks. 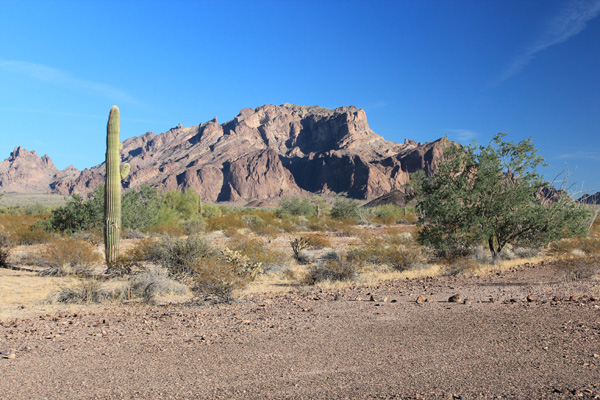 On Saturday, November 25, Eric Kassan, Stacey Samuels, and I hiked Signal Peak located in the Kofa National Wildlife Refuge of Western Arizona. Signal Peak is the highpoint of the Kofa Mountains and is the 16th most prominent peak in Arizona with 3477 feet of topographic prominence and 4877 feet of elevation.

I drove in to meet Eric and Stacey late the previous afternoon. As I approached Signal Peak from the west on the well graded Palm Canyon Road, Signal Peak appeared to be a complex mass of high cliffs. I was glad Eric was familiar with the route we were to take the next day. I turned off onto the more primitive Kofa Queen Canyon Road and after a few miles found Eric and Stacey at a nice dispersed campsite. We enjoyed a pleasant evening under a starry sky. 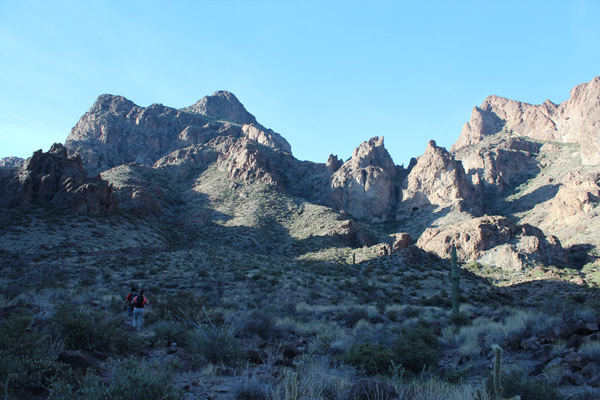 Saturday morning we drove into Kofa Queen Canyon and found the climbers trail leading up Ten Ewe Canyon. This trail leads up two canyons to the summit of Signal Peak. The trail is steep and loose in some sections and leads over some fun rock scrambles elsewhere. It was a warm November day in Western Arizona but fortunately the low sun angle and steep slopes around us provided shade for much of the steepest hiking.

Our route up Indian Canyon from the First Saddle

As we approached the summit I got a first view of the spine of the jagged Kofa Mountains leading to the southeast. The Kofa NWR exists to protect the desert bighorn sheep and the towers and spires of this mountain range surely provide a lot of opportunity for them. 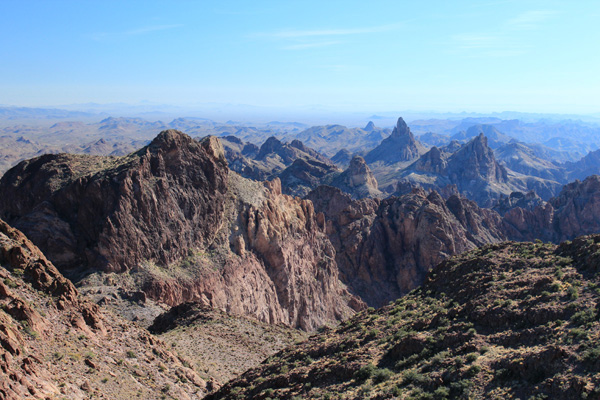 We relaxed on the summit, took photos, and enjoyed views of surrounding peaks and mountain ranges. As we began our descent we visited a lower summit to the north and once back on the trail met another party of two, the only other people we saw on the mountain.

After returning to our cars we drove to another campsite closer to Sunday’s climbing goal. Eric, Stacey, and I car camped beside the Castle Dome Mine Road Saturday evening a short distance within the Kofa NWR. I had picked up some firewood in Quartzsite that afternoon and we enjoyed a campfire beside our cars. We enjoyed the starry night in spite of the blinking lights and whine of a “Tethered Aerostat Radar System” hovering about two miles above the nearby Yuma Proving Ground. Early Sunday morning Adam Humphreys arrived while we slept.

Castle Dome from the drive in to the trailhead

On Sunday, November 26, Eric, Stacey, Adam, and I climbed Castle Dome Peak located in the Kofa National Wildlife Refuge of Western Arizona. Castle Dome Peak is the highpoint of the Castle Dome Mountains and is the 62nd most prominent peak in Arizona with 2088 feet of topographic prominence and 3788 feet of elevation. 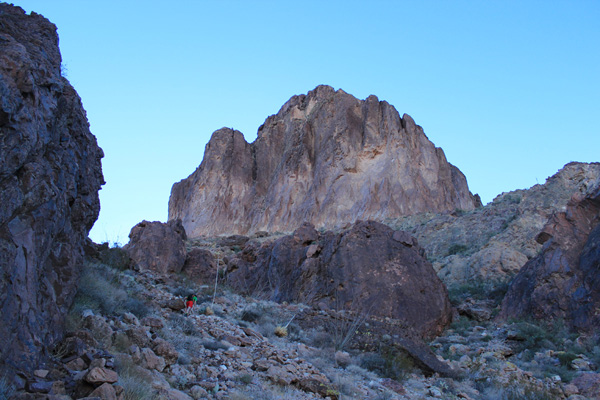 Sunday morning we drove past a mining museum and spotted a herd of desert bighorn sheep just off the road. We parked at a climbers trailhead near the mouth of canyon and followed the trail up a sandy wash for almost 2 miles. Castle Dome Peak came into view and we followed the trail out of the wash directly towards the steep north face rising above us to the southeast. The trail became steep and loose as it approached the vertical cliffs forming the north face of the peak and traversed below the cliffs towards a detached pinnacle below the east face.

At the notch between the detached pinnacle and the main peak a short fun class 3 face led to ledges and gullies higher. The route was well marked with cairns as it weaved left and right up the east face to the summit ridge. Another couple joined us on the summit, the only others we saw all day. 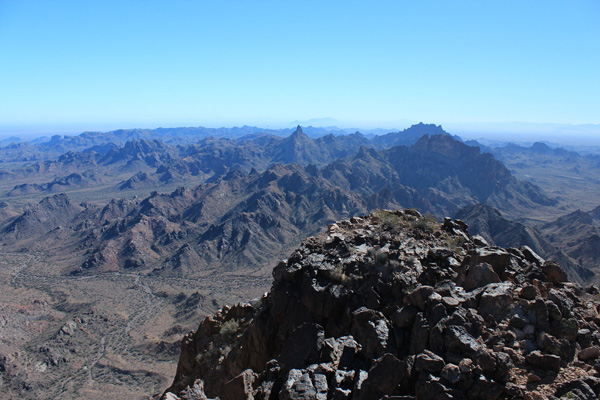 We read the summit registry, took photos, and enjoyed views of the Castle Dome Mountains to the NW and SE and other ranges in all directions. Adam helped identify distant peaks and ranges to the north and east, including Harquahala Mountain, Woolsey Peak, and the Eagletail Mountains. 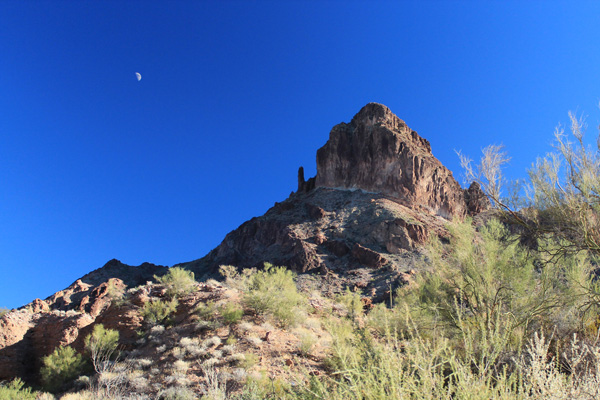 Looking up at Castle Dome Peak from the wash

We descended the same route, taking special care on the steep and loose trail below the cliffs. The afternoon light provided good views of the north face of Castle Dome Peak as we descended to the wash. After returning to our cars Eric and Stacey left for Las Vegas and Adam left for Phoenix. I found a dispersed campsite just before dark. 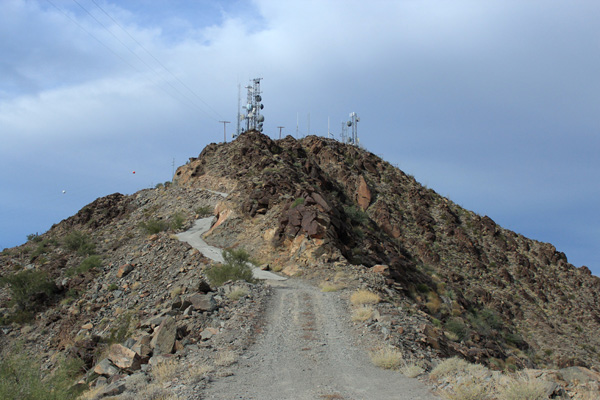 On Monday, November 27, I wrapped up my visit to Western Arizona by hiking a gated road to the summit of Cunningham Mountain, near Quartzsite. Cunningham Mountain is the highpoint of the Dome Rock Mountains. It is the 57th most prominent peak in Arizona with 2136 feet of topographic prominence and 3316 feet of elevation. It lies outside the Kofa National Wildlife Refuge on BLM land and is “decorated” with many communication towers, antennas, and buildings. A locked gate bars entry low on the access road, but I was happy to park at the gate and hike the 1.8 miles and 1800 feet up to the summit rather than abuse my Jeep on this unrelentingly steep and sometimes quite eroded road. 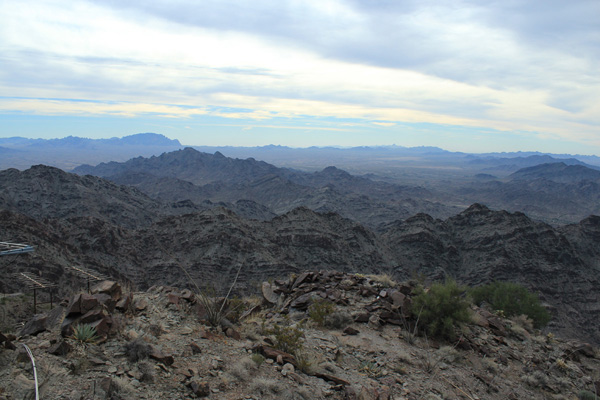 It was windy on the summit and high clouds were moving in from the west signaling a change of weather. I enjoyed viewing Signal Peak and Castle Dome Peak to the east, and noted the Harcuvar and Harquahala Mountains in the far distance to the Northeast. I expect to visit them another time.

I had the good fortune to have spent most of my life in the Pacific Northwest, where I discovered the joys and addiction of hiking and climbing in the Cascade Mountains and other mountain ranges in the Western United States.
View all posts by Paul McClellan →
This entry was posted in Climbing, Hiking and tagged Arizona, Castle Dome Mountains, Castle Dome Peak, Cunningham Mountain, Dome Rock Mountains, Kofa Mountains, Kofa National Wildlife Refuge, Signal Peak. Bookmark the permalink.